Our holiday season went by in a blur. Probably the top culprit is our large...and getting larger...renovation, but not having any time off work and multiple Christmas parties don't help either.

It is my Captain, Mark McQueen's, last year on the job before being forced out at 60 next April. The rules exist so that there aren't guys staying around when they no longer have the stamina or energy for the job. Queenie definitely doesn't fall into this catergory. The guy has more energy than 95% of people 3 decades younger than him. He is always positive, up-beat, friendly...and it's been great working for him this past year.

Because of his impending retirement, this has been a year of "lasts", including his crew (and families) Christmas party. 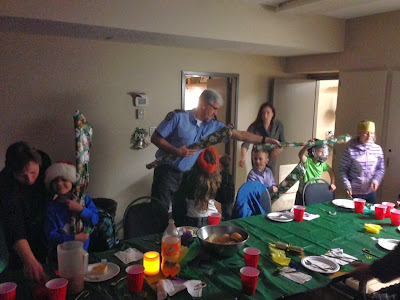 Mark bought and made dinner for 25 of us. A casual game of street hockey after dinner turned into an intense, sweat filled 90 minute battle with a few narrow misses of hard orange balls in the face. 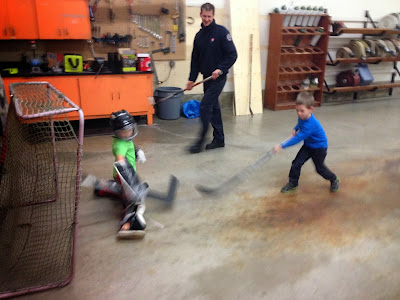 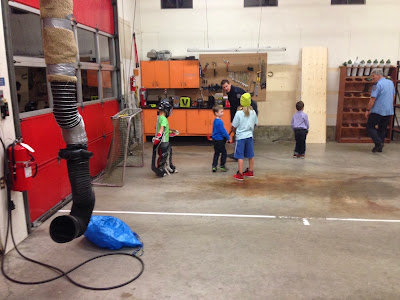 Lukey was in his element playing goalie, while the adults stood around and watched, and the girls  (in the background here) played some complicated game that involved swinging onto the treadmill to have it shoot them onto the mat at high speeds. 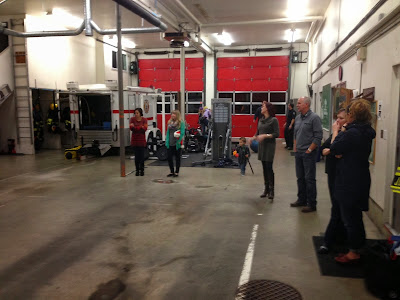 Les and I, along with 150 other's fire fighters and families, attended our department's Christmas party. McQueen, for over 20 years, has organized this event, so there was lots of talk of the last hurrah. A good time was has by all.