We started the season with only 12 grade 8 girls coming to try-outs, so didn't need to worry about making any cuts. Luckily, the 12 players almost all had some basketball background, including 5 who had played with us on the Cobras.

With Ariano Catena and Katherine Atkinson splitting the coaching duties with me, we had a coaching team capable of being at every practice...and figuring out the priorities for the team. We focused on

The girls were great. Although they had many competing demands of their time, when they showed up they were focused and ready to play. They seemed to have fun with each other and established a great team culture.

We won all our league games fairly easily, with only a terribly refereed game in Crofton House, with Avery missing, Finny and Mila fouled out, that we were truely tested. In this game, 5 different players scored in the final quarter for us to pull out the win.

We only lost 4 games all year. The first was in the finals of the Douglas College tournament when we faced a 3D team that had been playing together all fall. Although we were within 2 points in the final minute, we ended up on the losing end thanks almost entirely to our lack of experience playing against pressure. As much as turnovers were a problem, the biggest issue was that their pressure took us out of our offence and left us scrambling. Great lesson.

Although we easily won (by about 40 in the finals) the grade 8 ISA provincial championships, we lost in the semi-finals of the JR (grade 10) ISA provincial championships to a strong Saint Michael's University team from Victoria. Although I think we were the better team, they had one really strong girl that we weren't physically ready to match up with. We won the consolation final to give us 3rd place.

The other 2 losses were both in tournaments where we lost to Seycove in the finals. One game was relatively close and the other a 20 point loss. Seycove was the top ranked team in the province and executed better than any other team out of their full court press break and their 1-4 high offensive set.

In our losses, we didn't feel like we played our best games. Also, we played all 11 players on our team while they only rotated their top 7. We were excited to see them again in the provincials.

We won our first 2 games at provincials by 40 points, despite not playing great. Our girls were nervous and turned the ball over way more than we should have against weaker opponents. In the semi-final we played a much stronger McMath team that we beat 35-33. Although we were clearly the better team, our girls struggled to shoot the ball against a 2-3 zone. Perhaps a coaching error, we had not spent much time preparing for zone (which is banned until the provincial championships).  Between nerves and lack of zone offence experience, we kept the game much closer than it should have been but lead the whole way.

We figured we'd see a lot of zone against Seycove, especially since they watched our semi-final game. Despite only walking through our new zone offence for 1/2 hour before the game, we felt confident going into the final. Seycove basically had 2 players who scored, where we had 5 different people lead our team in scoring this year. 10 of our players had scored in the tournament and we moved the ball well.

We came out on fire, up 14-4 in the first quarter. Despite the foul count being 12-3 against us at half, we still had a solid lead. Our girls never let up our defence, our pressure, our rebounding...and they took care of the ball. They did everything we asked of them and won 46-40. 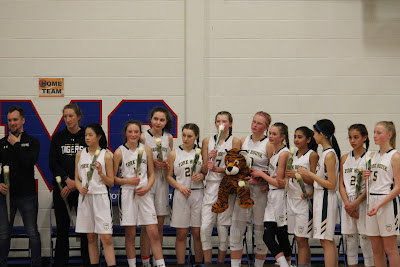 Wow!   A huge congratulations to our grade 8 YHS Tigers team! The coaching staff is so incredibly proud of your work this season.

Yes, the championship was nice....a really great way to finish the season that no one can ever take away from you. However, much more important was seeing your growth as individuals and as a team over the last 4 months that allowed you to compete for a championship in the first place.

You showed resilience, focus, and great mental determination to overcome all the obstacles in your way. I hope that this reveals to each of you a little more about your inner strength and possibilities for the future in basketball and life.

As part of the educational take-aways from this season, I think it's important to know why you were able to win a championship.

Sometimes teams win championships because they get hot, or lucky at the right time. This wasn't the case for us.
You won a championship because you worked as a team.

DEFENSE:
You played better team defense than any other team in the tournament by far. Seeing you defend all tournament...but especially in the final 5 minutes of the game when Seycove desperately needed to score and could barely get a shot off, made us so proud of your growth this year!

OFFENSE:
You won a championship because you did a better job sharing the ball than any other teams. Like every team, we have a few players who score the ball more than others. However, unlike other teams, we had everybody contribute this year. 4 different players lead our team in scoring during games this season. We shared the ball and trusted all our team-mates to pass, dribble and shoot when the opportunity presented. We did this all season...and it paid off.

PREPARATION:
You won a championship because you prepared better than other teams. The time you spent shooting as a team and individuals paid off. Even though we weren't "raining 3's", there were a couple of key shots that probably wouldn't have gone in if not for the time spent with Dr Dish. Rain had a good shooting tournament. Vanessa, Kasey, Anika and Chloe had some big shots. Sophie hit some of the most important shots of the tournament at the end of both the McMath and Seycove games. It is this type of focus and dedication that is necessary to win championships. 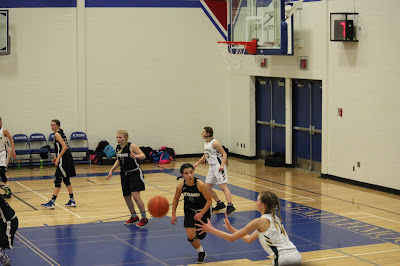 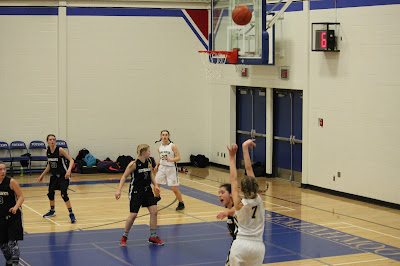 SACRIFICE:
You won a championship because of sacrifice. You all accepted and played your roles on the team. A championship team is not made up of 5 players who all concentrate on scoring. It is made up of 11 players who are willing to do what it takes to win. Risa set the tone early in the season, playing such hard defence she broke her collarbone. In the finals, Bianca and Anika were vocal, engaged, supportive and ready to go in the game if Avery or Finny picked up another foul. Zoe jumped in to fill some key moments of game. Perhaps nothing exemplifies sacrifice more than our Unsung Hero Sophie K. Nobody worked harder on defence in this tournament than she did or helped their team more without receiving the limelight. Sophie was dialed in every defensive possession and shut down the best players from Churchill, McMath and Seycove. 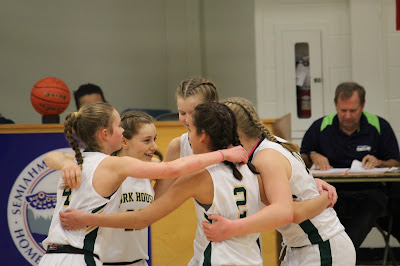 You won a championship because all of you took your game to the next level. Avery, who has been fantastic all season, played even harder than ever and lead us with her performance on both ends of the court. Finny and Mila eliminated the reaching fouls, cut down on turnovers and turned their defense up to an even higher level than the regular season.

You won a championship because of your work level. We talked about how winning a championship wasn't supposed to be easy...and you all embraced the challenge. We told you that you'd need to rebound even harder on both ends of the floor, and you did it. 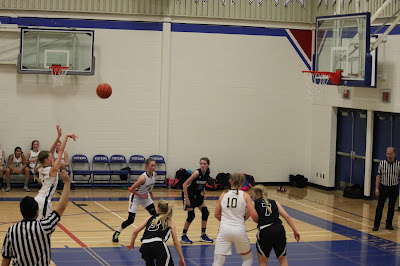 You won a championship because you were willing to face your fear/nerves, accept them for what they are and play through them. You showed such maturity and pose. Next time you're really nervous about something I want you to remember this.

We're so proud of all of you. If you keep up the hard work over the off-season, we can have an even better season next year.  We'll talk during the week to figure out the details of your hard earned shooting club prize. 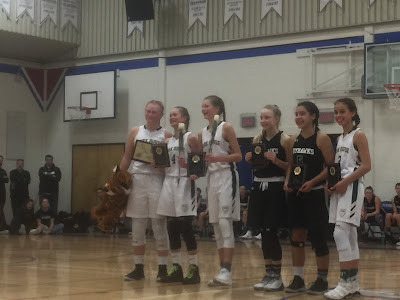 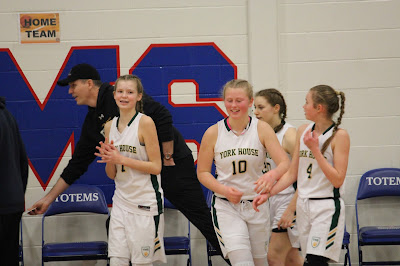 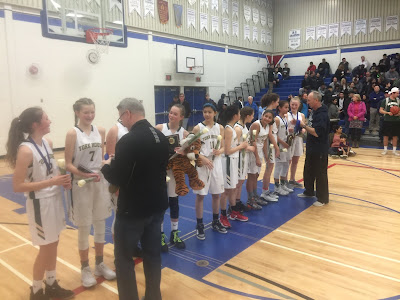 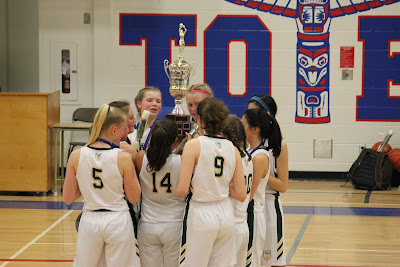 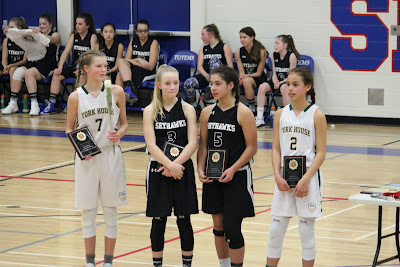 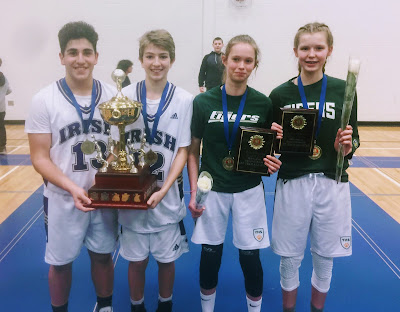 Posted by Ericandles at 11:24 AM No comments: