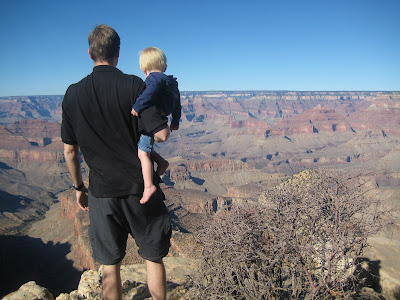 In an effort to escape the encroaching damp greyness of Vancouver, Eric and I (and Lucas, who we can't quite shake just yet) escaped to the sunshine. We took a mini-holiday to Arizona and Nevada, managing to hit Las Vegas, Flagstaff, the Grand Canyon and Phoenix. It was hot. It was dry. It was wonderful.

Being an extra-sensitive flower, Eric needed a bit more Vitamin D, so he headed south a few days before me and the little guy. We flew into Vegas (Lucas was just about as good as an almost two year old can be on the plane...in other words, it was a long flight filled with countless whispered renditions of "Skinimarinky Dinky Doo" and enough knee jiggling to permanently disable my lower thighs). Eric arrived nearly half an hour late at the airport looking pretty grim. He had driven up the day before from Phoenix to watch some of his Delta firefighter colleagues compete in the World Combat Challenge. Some beverages were consumed. Let's just say, Eric was wearing his sunglasses inside. I was just glad to see him, since images of shallow graves dug in the desert were starting to worry me when we arrived to no Eric in sight.

Vegas seemed bigger, brighter and busier than I remembered. But I almost wept when Eric reminded me that it had been over thirteen years since we'd last been. I would have guessed it was just a few years ago. Next time though, no kids. Lucas is a terrifically fun boy, but Vegas is not meant for toddlers. The buffet was a hit: endless watermelon. 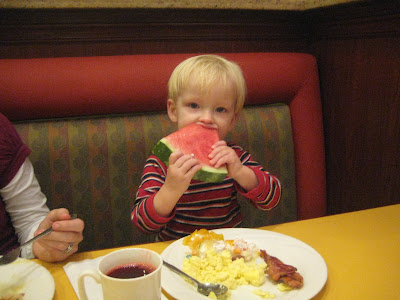 But there was considerable vigilance required around the pool (and let's face it, that's not exactly the definition of relaxing), 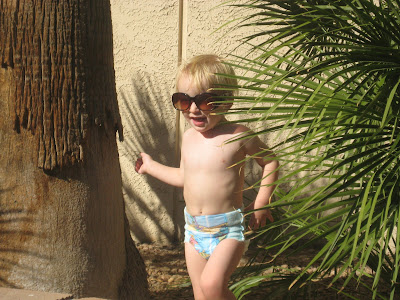 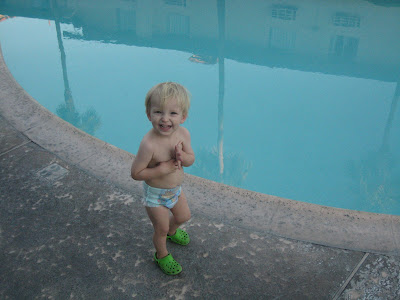 and he quickly tired of the Combat Challenge scene. 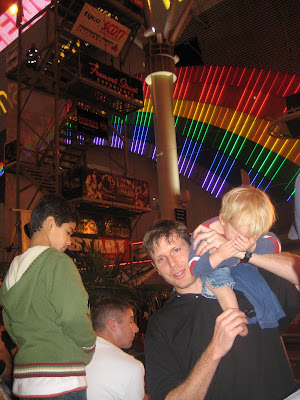 Neither Eric nor I had ever seen the Grand Canyon, so we left the Casinos behind and spent the next day driving to Flagstaff. We spent the next two nights in a Drury Inn. We had only planned on one night, but we were so impressed that we booked another. They had free drinks in the evenings (beer, wine, cocktails...plus, appetizers), 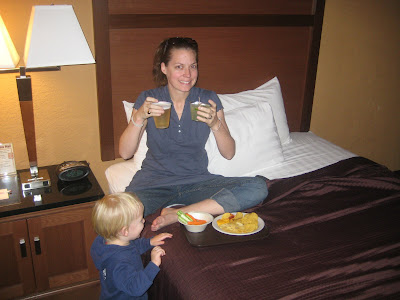 a free hour of long distance per night, fantastic free breakfast in the morning and huge, nice rooms.

The terrain in Arizona changes incredibly quickly, and Flagstaff was almost twenty degrees cooler than what we'd enjoyed in Las Vegas. Almost enough to make Eric (my sun-seeking pasty white guy) turn back. Having said that, our day at the Grand Canyon was as spectacular as you could wish for...panoramic views and a cloudless, sunny sky. Even though I knew I'd be seeing one of the Seven Natural Wonders of the World (quick, name the other six...), I was still overwhelmed by the scope of that big, big, really wide, humungo hole. We spend hours there, stopping at all the viewpoints (where the canyon always managed to look slightly different, which I thought was a bit weird...I mean, a hole's a hole, right? But somehow, not...). It was impressive, despite my early misgivings that they charge you $25 just to drive through the park. That seemed a bit grubby to me, charging to see a natural phenomenon. But, the park is stuffed with things to look at and infrastructure to facilitate your viewing pleasure. So, fine. Take my 25 bucks. Go save another condor, or whatever. 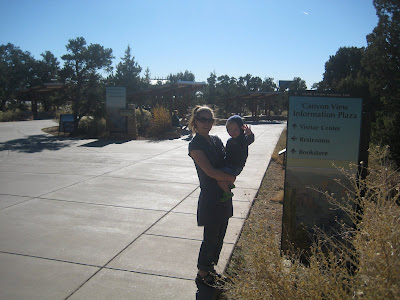 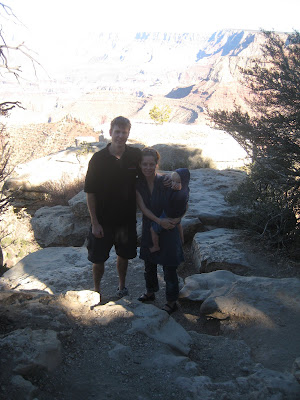 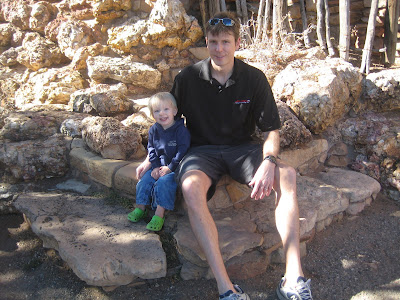 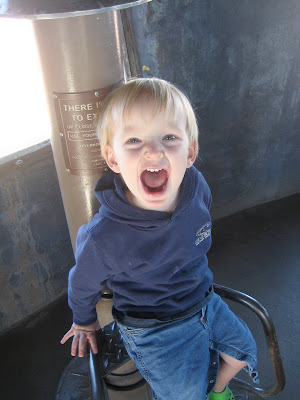 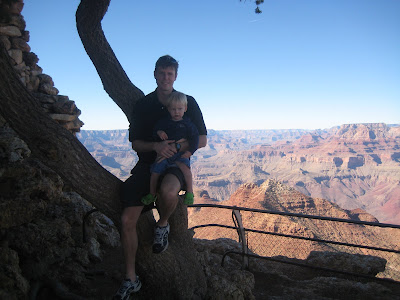 We drove the disappointing Route 66 while in Arizona, and I have to say, in a country of rampant commercialism...what the heck? Peach Springs? It sounds so cute, like you should just stumble upon a kitschy but adorable diner where a bleach blond, beehived waitress with a scowl and an order pad reveals her heart of gold when she slips you a free slice of apple pie. Yeah, not so much. Hard to know which was the bigger hole: the Grand Canyon or the segment of Route 66 we drove.

Phoenix was nice. We stopped by the foreclosed house we bought a while back and lamented that it is far nicer than where we live. We consumed far too much Sonic slush. We stayed with a guy Eric met on the plane last time he went down (I know, I was suspicious at first too, but this guy is really nice...if we disappear though, check into this further). Oh, and Lucas learned to drive. 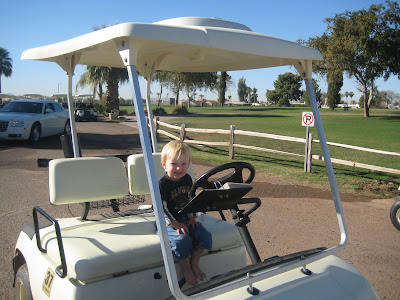 Then we came home.

And because we are negligent bloggers, here are some Halloween pictures:

Our Lucasaurus (courtesy of the costume my mother sewed for my brother in about 1987): 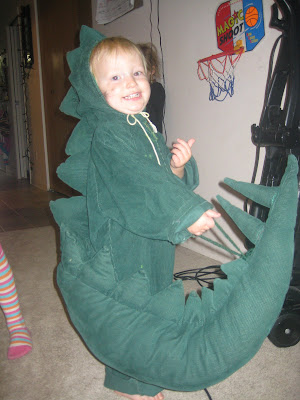 This shot is waaaaaay scarier than the dinosaur: 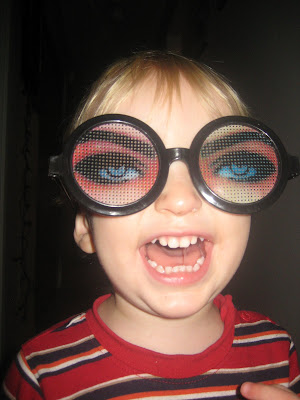 Finny went out on Halloween as an evil stepmother/wicked witch (the point I think she was trying to make is that she wanted to be nasty...): 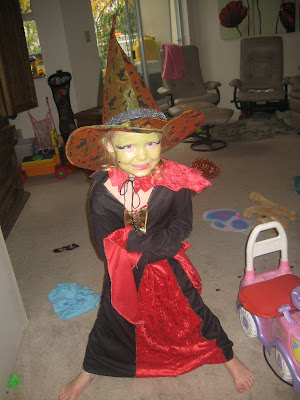 And finally, a Webkinz panda bear: 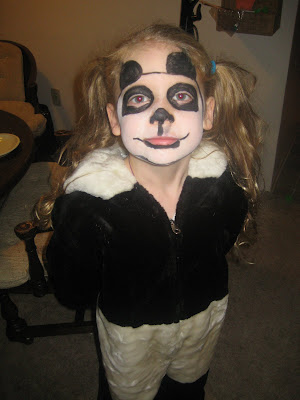 Oh, and me as a zombie-bride head: 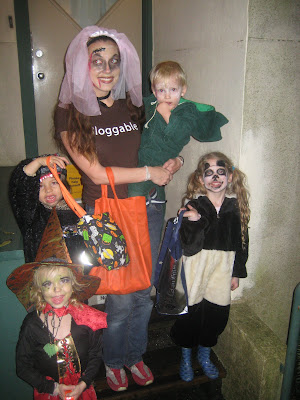 I remember that dinosaur costume!!!!