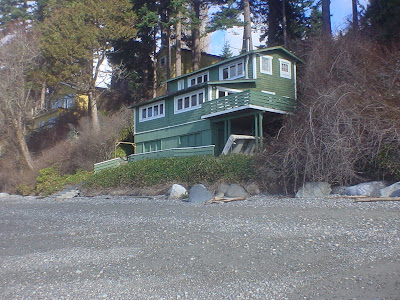 We'd like to welcome our new neighbours in Point Roberts, Bryan, Judy and PJ McKnight. (Although PJ is not officially on the owners certificate, I am pretty sure we'll be seeing a fair amount of him considering that he now has access to the American sub-50 cent beer market that every 24 year old Canadian has to love!) For over a year, the McKnights were quietly on the look-out for the right opportunity to buy a place on the Point. At the beginning of March, the perfect place became available- a beautiful lot on the beach, with a small, rustic cabin that over-looks Georgia Straight. 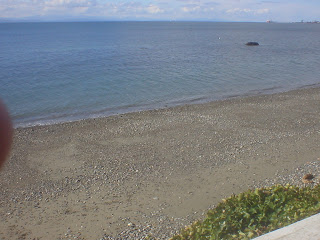 Bryan and I drove down to the Point yesterday while Les and the kids went to a morning Art/Dance class at Arts Umbrella and an afternoon Swim lesson at the Arbutus Club. I had my first tour of the cabin and opportunity to lend a hand. That's the thing about recreational property- there's always work to be done. But who can really complain about work when it's outdoors in the sunshine with a view like this. And there's always a cold beer waiting for you! Later in the afternoon we tackled some work at my place. It finally felt like Spring as I power washed away the 6 months of "waterlog", that was our winter, from our decks and driveway. The only part of the day I didn't enjoy was cleaning out the pond/stream in the front yard. It is pretty much a cesspool of scum this time of year that has to be pumped out. The highlight of this activity came at the very end, when the water was pretty much all drained and only a thick brown sludge remained. With the thickness of the "liquid", the pump wasn't working well and needed some adjustment. As I rotated the base of the pump, the hose disconnected, sending a powerful wave of sludge right into my face (not to mention pretty much every other part of my body). Thankfully I had a partner looking out for me who decided it was time to call it quits, grab a beer and get home in time to watch the Canucks win their 46th game of the year. 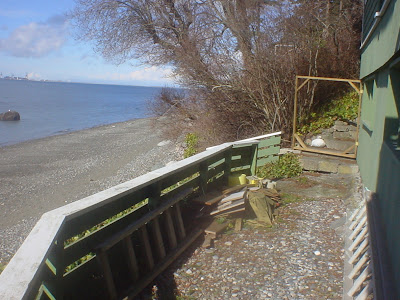 Posted by Ericandles at 9:38 PM