Today was my first day at the hall responding to calls. There was nothing monumental to write about. There was lots of work to be done and many things for me to learn. Even going out to my first call, a motor vehicle accident on Nordel Way, I was busier thinking about what I needed to do than I was celebrating the occasion.

Although this may sound anti-climactic, it was actually a really good feeling to just be part of the crew with my own set of responsibilities. We tore apart a car in the morning for an auto extrication drill and set up a fire attack in the afternoon. The crew was great and made me feel at ease on my first day. The only exception was the ribbing I got for my temporary turnout gear, which was made for someone about 10 inches shorter than me. I heard, more than once, about how I was the first firefighter to show up in Capris and a belly top. I imagine however, that it can't be too long before I do something stupid enough to get bugged about something a lot more personal than my ill fitting wardrobe.....but that's just part of the nature of the job. 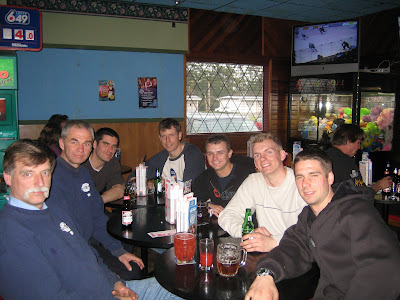 Posted by Ericandles at 9:22 PM