E- Nobody to be found 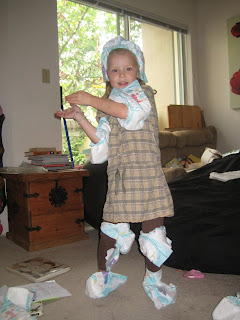 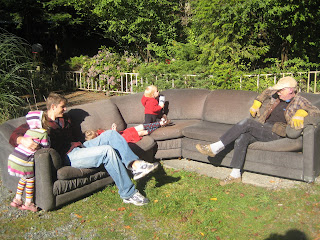 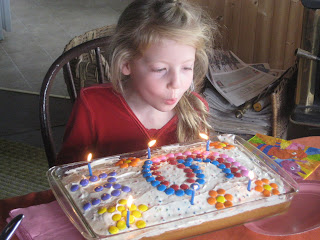 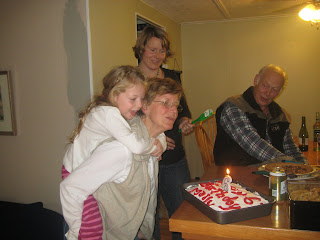 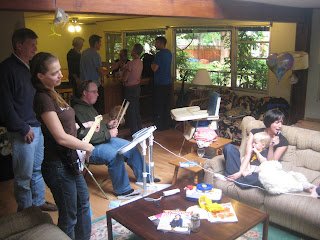 Life can get pretty crazy when you are working nights and have your days filled with activities. With night shifts after Molly's birthday on Saturday afternoon and a Thanksgiving lunch at our place in Point Roberts on Sunday, the weekend passed in a blur. On Monday night we had yet another Thanksgiving dinner, meaning we had a lot of eating in a little time.

We decided to take advantage of the good weather to put our old couch out on the road for any takers. It took three days but eventually our bait worked and we pounced all over the opportunity to move the big grey beast. We were happy to have it recycled to a new family but it looked kind of good on the road as well.

My personal highlight of the weekend was watching the Rock Band performance by Les, PJ, Jason Wood and Paulina and the total look of astonishment on the faces of our parents who claimed not to recognize a single song.

At work we had a big fire on a night shift. Because some other trucks were tied up on calls, my Engine was the third on scene, even though we had to drive 25 kilometres to get there. By the time we arrived the small kitchen fire had spread across the whole roof and down many of the walls of the tinder dry cedar house. With the roof falling in there was nothing left to do but fight the fire from outside. I had a 2 1/2" flowing a lot of water on the roof, but couldn't make any progress until more help arrived. It took the better part of an hour to put the fire out.

The next night we had a really unusual call. It came in as "Engine 1 respond emergency to Highway 10 and Highway 17 for medical aid. Pedestrian reported struck by a car. Shoes and jacket found but no victim." By the time we arrived, the police had already blocked off the whole highway. We saw the shoes and jacket on the ground. About 100 metres of the outside lane was covered with body matter before it abruptly ended. Another 100 metres further ahead was the smashed up car that had struck the pedestrian. Lots of evidence of somebody needing help but no-body to be found. We got out our flashlights and started searching the area. With the help of the police helicopter lighting up the road, it wasn't long before we ruled out the possibility of any victim in the area. Weird!

It wasn't until the police told us that a bus stopped 5 kilometres away in Richmond with brake problems that we pieced together what went on. It turns out the bus following the car that struck the pedestrian didn't see it happen and ran over the body. After dragging him for a few seconds, the victim got caught up in the axel where he stayed until the bus driver noticed some braking trouble. He got a pretty rude shock when he went to check it out! With the mystery solved, we were pretty happy to hear he had crossed over to Richmond and we wouldn't be responsible for extricating him from the bus.

I don't know what Finny was doing with the diapers, but it made me laugh.
Posted by Ericandles at 10:45 PM