Molly had a little breakdown tonight. She was overtired and overwrought, but the words that tumbled out of her were true.

I remember being a little kid, when 10:00 felt like the middle of the night and the talks I had with my mom were deep. The "late" night talks are stolen moments. Snagged away from the every day, they are a different type of conversation.

Tonight Molly confessed to feelings that I knew she had, but that run deeper than I thought. She is terrified of growing up. She scared that she will change.

Huge teardrops poured down her freckled cheeks as she told me that all the things she liked best were "kid" things. Pretending. Playing.

"Grown-ups don't hop around like bunnies, or play behind the couch. All you do is sit on the computer, talk to other grown-ups and use the phone. I don't like any of those things."

I told her that she could do that kid stuff for as long as she wanted. But that's the point. I think she understands that the time will come when she won't WANT TO anymore. That is what makes her sad.

What could I tell her? She was exactly right. It is tragic. It doesn't last.

I loved pretending. More than anything. What happened to that? Just like her, I thought that was what I was all about. I was all imagination and stories in my head.

The toughest part of our conversation tonight was the double-edged sword of feeling sad for what Molly will lose and understanding what I lost too. There's nothing truthful I could say that would make it better, except that I will love her even if she is a hopping bunny at 15 years old.

The part that made me cry as I said it was the fact that I know she won't be.

She won't be a hopping bunny or a hedgehog behind the couch. She'll be a beautiful, smart, creative young woman. But she won't be a bunny.

Right now, that's all she wants. She told me, with wracking sobs, that she tried to stop time when she was seven and it didn't work. She looked at me with eyes that begged me to tell her a secret. She wanted to know how to make it stop.

I would tell her if I could. I really would. I bawled when I turned 10 because I was leaving single-digit ages behind me forever. I understood what that meant. She does too. 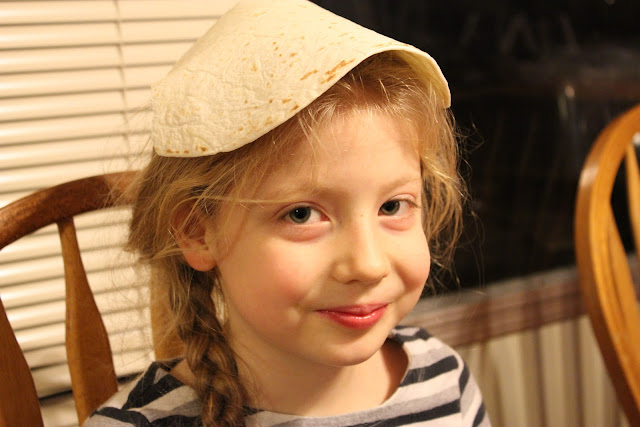 That's why I didn't tell say simple, consoling words and wipe away her tears. I cried a little too. We hugged tightly and I told her that she should just be herself, wherever that would take her. I told her that she could always be a hopping bunny with me. I hope that's true.
Posted by Ericandles at 12:13 AM

Oh, Les. Please tell darling Molly that she can come with us to Canadian Tire or Toys'r'us or anywhere that has bouncy balls out in the open and Dan and I will prove to her that you can still REALLY play, even when you're a grown up.

Truly. Ask me about the time that I accidentally hit the customer three aisles over with the ball. On the head.

Maybe we could have a Butler-McKnight, McTaggart-Ames night where the short people get to plan the activities. (I still will not soak my feet in that bath water, though.)

(P.S. Can you please stop making me weep?)

Here I am behaving myself in Florida, just got back from a nice walk on the beach with Paul and the puppy. Sat down and read your blog, now I have red swollen eyes and am crying for our collective lost childhoods. Thanks Les, you really know how to hit a nerve.