Seeing as Mother Nature hasn't delivered any summer weather, we figured we needed something to signal the start of the season...because it wasn't going to be sunshine.

The kids finished school on Thursday and Friday morning bright and early, we headed to the ferry and made our way over to Long Beach. We had two night booked in the Ocean Village (ours was the one on the far right, upper level). Directly on McKenzie Beach, it just couldn't get any nicer. Oh wait, it could. With some sun. 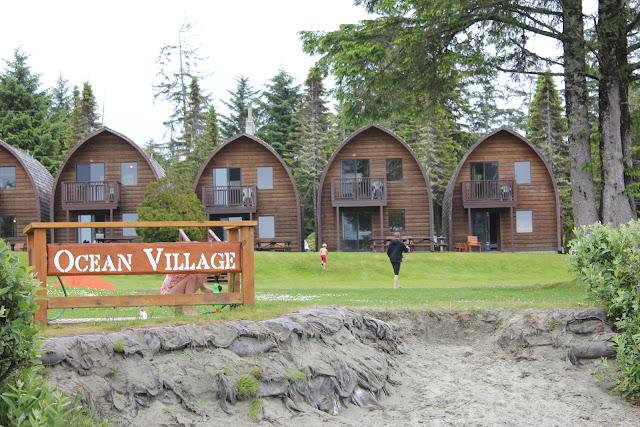 Undeterred, the kids threw on their bathings suits (frigid temperatures and gusting wind, be damned!). Water Fight! They fought valiantly, while Eric and I scampered out of their way, squealing like wussies and whining if we got a drip of water on our winter coats. 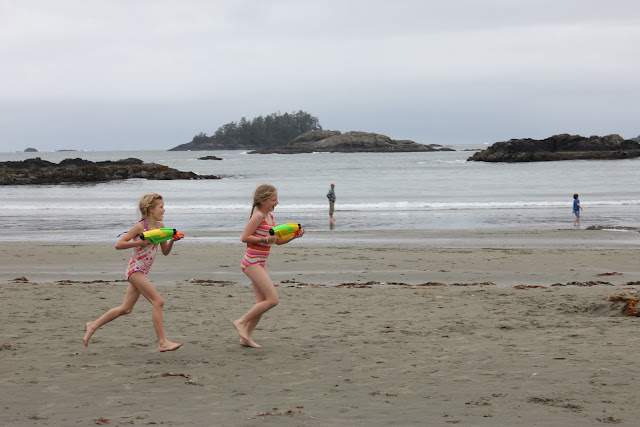 It was as though the kids had NO IDEA it was freezing. 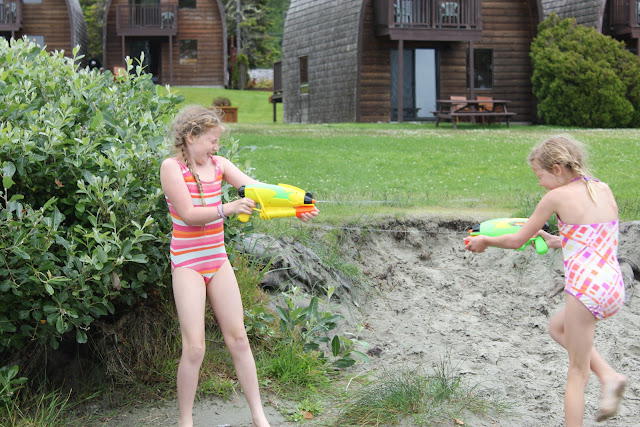 It was a hard core fight. 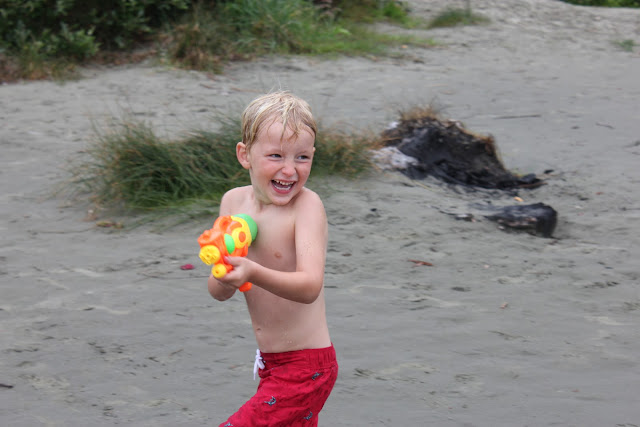 And, as always, Finny is terrifying. I was scared taking this picture, but I was banking on her having the good sense not to soak the camera. 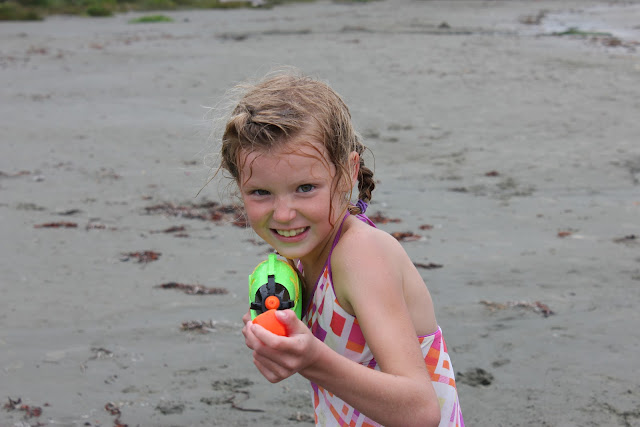 Molly was blasting Lukey in the picture below, but Finny is running up behind...and she drenched her. 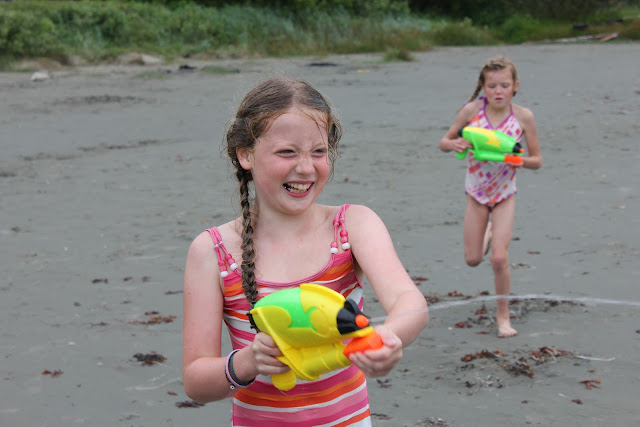 And once they were wet, why not take a little dip? 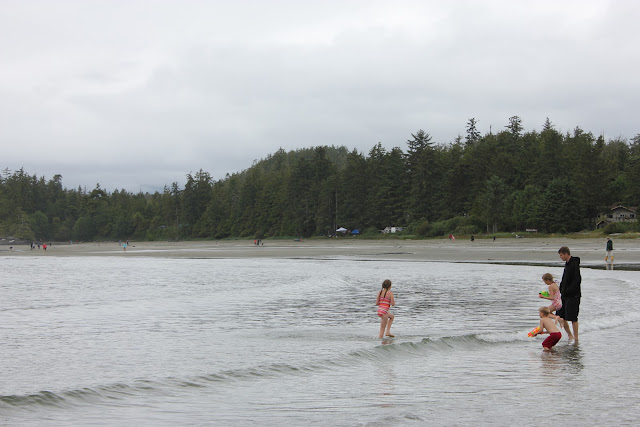 Then, once they realized they were cold...right into the heated pool and hot tub. 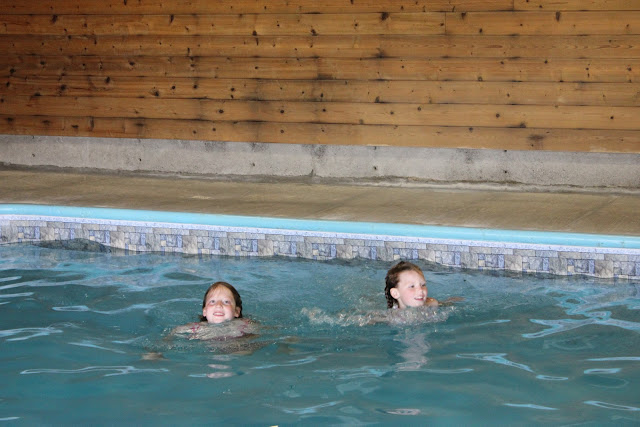 After dinner, we went for a walk along the beach and envied the campfires lining the shore. 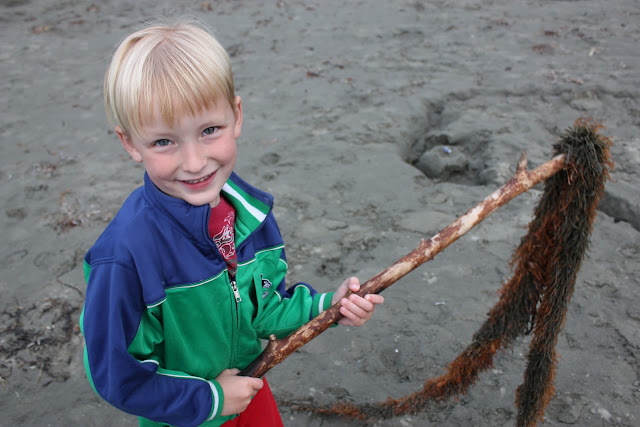 We decided on a campfire of our own for the following night. 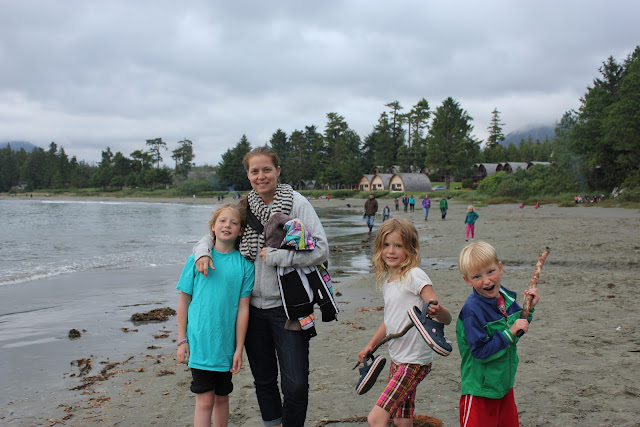 We turned in for an early night and slept like babies with the sound of crashing waves as our lullaby. In the morning, we used the fully stocked kitchen in our cabin to make a breakfast feast before heading out to explore Tofino. Eric and I took many trips to Long Beach before kids, but we have never been there as a family. I'd forgotten how charming Tofino is...we even got to witness a big-time small-town moment as an out of control driver plower into the front of Tony's Pizza. It was a big deal in small Tofino.

We walked in to Tonquin Beach. 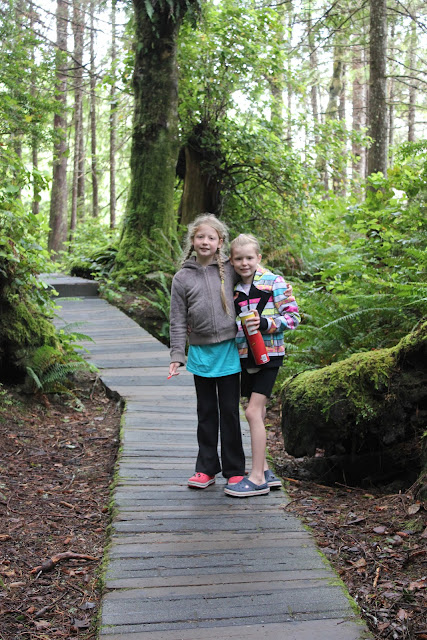 We ran a few races along the beach. The little girls thought they could beat their Momma...but they were wrong. I showed those tiny legs that they have some growing to do before they can make me eat their dust. They were humbled. Finny made me run many times. As you can see in the picture below, I didn't take it easy on them. In fact, this picture makes me think I might have rubbed it in a bit much...maybe lose the "Number One" fingers...? 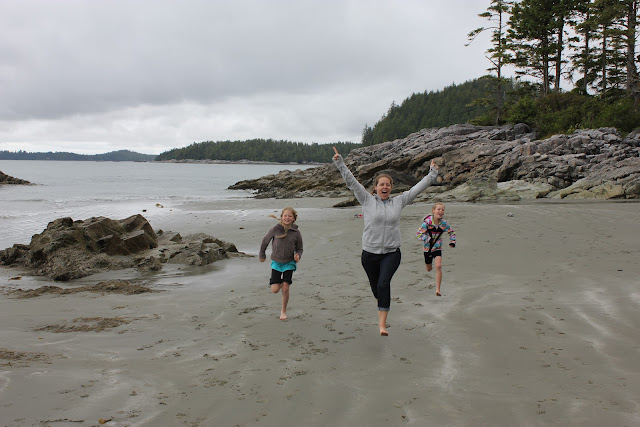 Lukey played mountain goat while the girls and I battled. 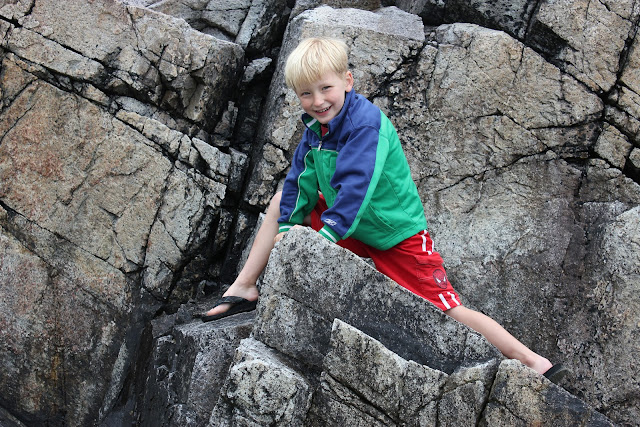 Finny was finally speaking to me again by the time we left the park (Seriously.). 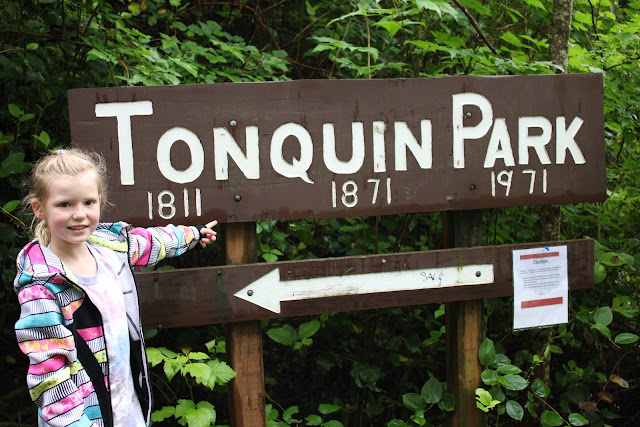 We even found a pot-bellied pig grazing on the side of a residential road...the kids were enchanted. Only in Tofino. 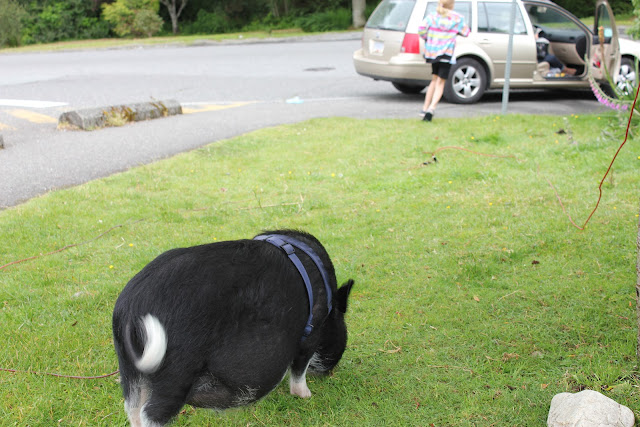 We got some groceries to BBQ back at Ocean Village (they thoughtfully provide a very swanky pair of grills for guests) and then popped over to Cox Bay to let the kids see the big beach. They, of course, wanted to swim. It was insane. There were parents there who had their kids in toques. My kids were in bathing suits. 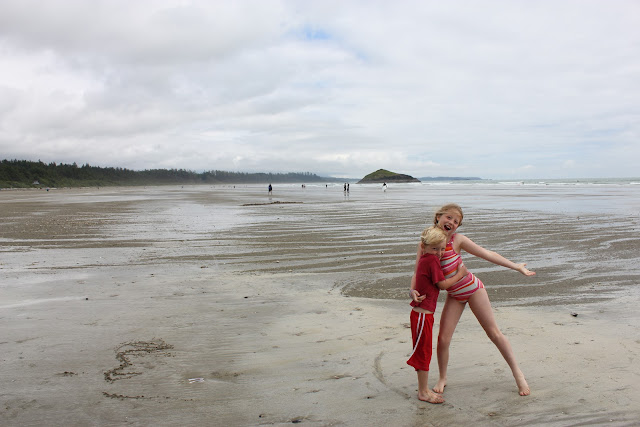 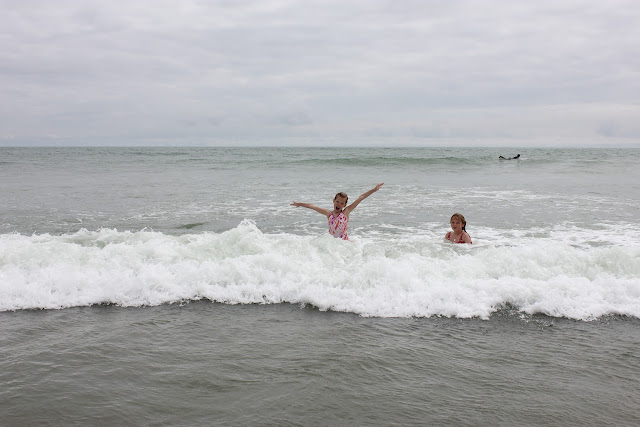 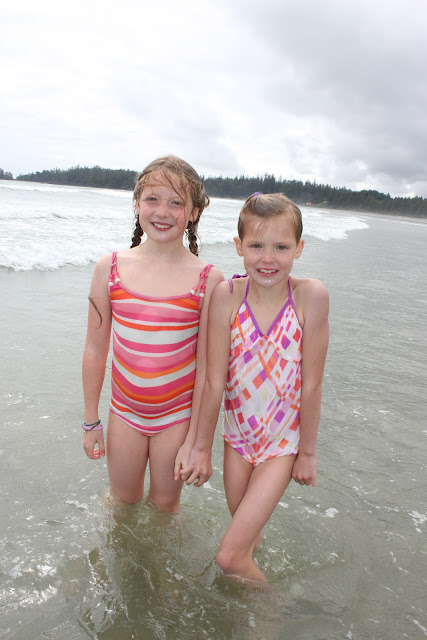 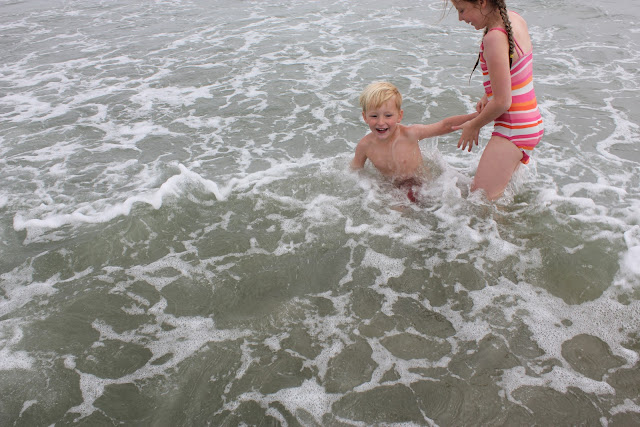 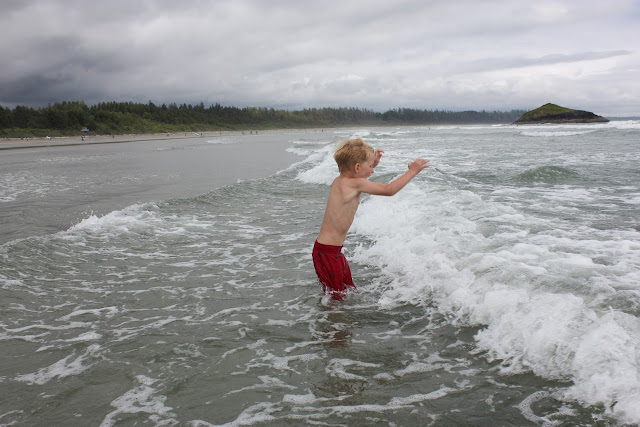 Without even changing, they dove right into beach fun. I was uncomfortable in my sweater and scarf. 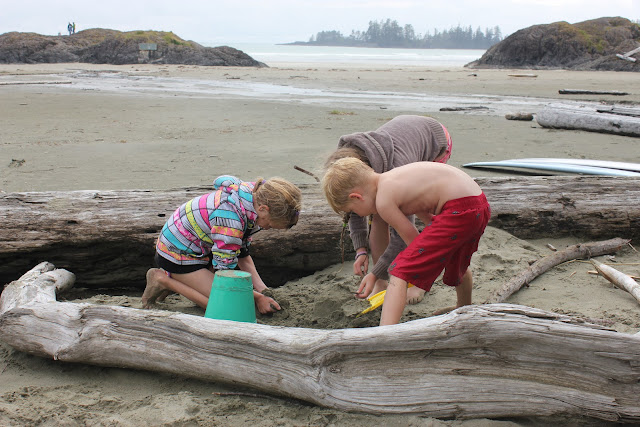 We headed home and threw them into the heated pool to warm up, while I prepared dinner. As we were grilling, the kids made friends with a family from Ballard, Washington. They had a five year old and an eight year old. We shared a fire with them after eating. We contributed marshmallows and they shared graham crackers and chocolate. We had cross-border s'mores. It was a victory for Canadian/American relations. 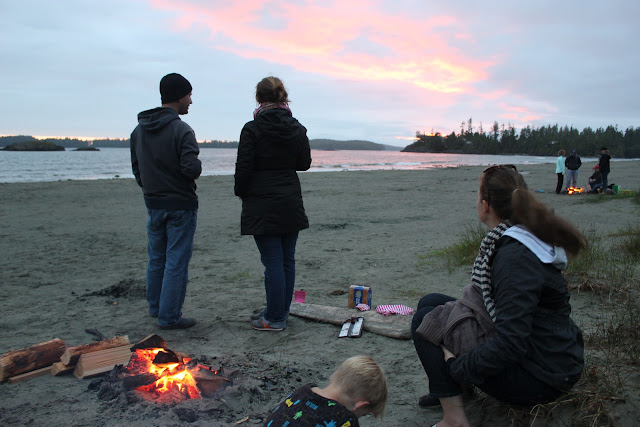 When we headed back to our cabins, the kids were crusted in sand and freezing cold. We threw them in the bath to warm up and cuddled them in bed, feeling good that we'd squeezed every bit of fun out of the day. 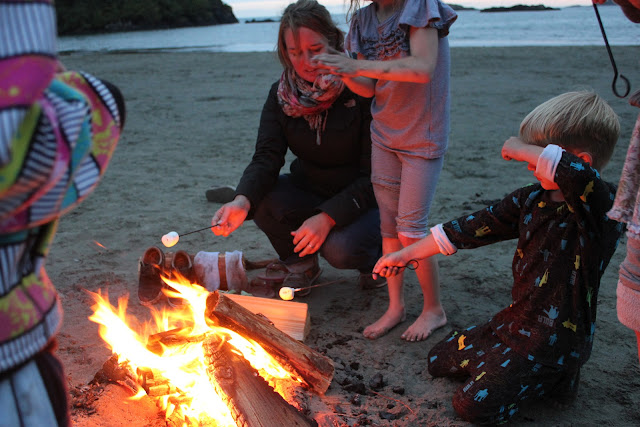