So, we went to Beijing.

As with all our "holiday blogs", reader beware. These are long, photo involved posts. Due to the firewall in China, I wasn't able to blog while we were away. I have some catch up to do!
Due to some extreme cousin generosity, we ended up with a fantastic place to stay in Beijing. How could we say no to a springtime trip to China when we had Heather and Steve's beautiful apartment to use...right in the centre of the city? We planned nine full days in Beijing, but we really had very little idea of what to expect. We were lucky enough to have my dad join us as we set out for a Beijing adventure....

We arrived in the city late, late at night. Culture shock is intensified by darkness and lack and of sleep. Nighttime seems strange pretty much anywhere.

What makes it seem less strange and foreign? Arriving at your spectacularly located and marvellously appointed apartment. What a pleasant surprise. We were exhausted, but grateful to settle in and SLEEP within about half an hour of arriving.

We woke up refreshed and ready. We were able to wade into China gently. The huge, luxury mall right below us was a very gentle intro. We walked through the Nike store, the Gap, McDonald's and Cold Stone Creamery. So, we pretty much could have been here at home. Outside on Wangjujing Street, though, things got a little more real.

Within about five minutes of setting foot outside the mall, we were four floors underground in some sketchy "studio" looking at crap art because we got lured down there by some dodgy characters...so, don't talk to weird strangers? Oh, okay.

After a great walk around, we headed back to the apartment to clean up for our first dinner in Beijing. About six weeks before we left, I'd reserved three seats at Black Sesame Kitchen, the top rated restaurant in the city on Trip Advisor.
Many of the reviews said to leave a lot of time to actually find the restaurant, which is tucked away in a tiny courtyard deep in the hutongs (alleys) of the city.

We took the advice and I am glad we did. We thoroughly enjoyed our walk around the local area. It was a fantastic introduction to the culture of the city.

Taxis are crazy, crazy cheap. Crazy cheap. Like...cheap. There are six yuan to a Canadian dollar. Most cab rides were around 15 yuan. So, less than $2.50. No tax. No tip. Love it.

I fell in love with the architecture. The grey bricks and the old wooden windows were so beautiful. 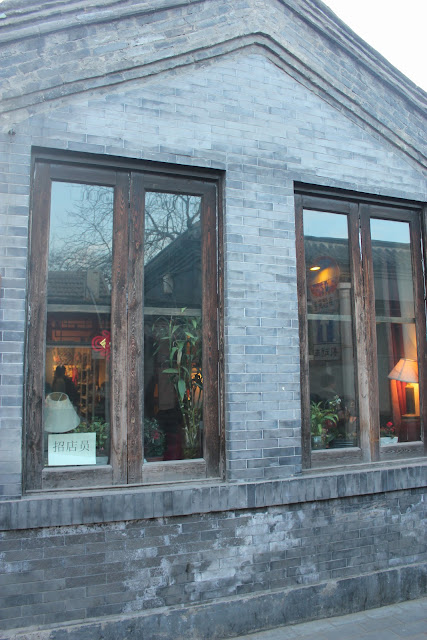 In the photo below, you can see Dad scoping out the octopus balls stall. I honestly think he would have had some squid on a stick if we didn't have dinner plans already. 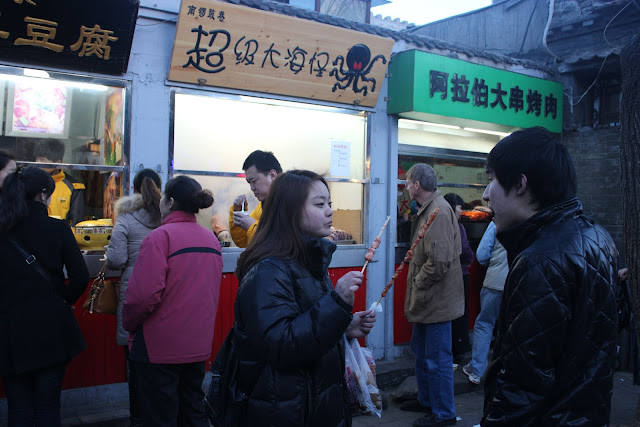 You can see the old buildings from the traditional hutong house in front of the newer, more modern Beijing. I can tell you what I prefer... 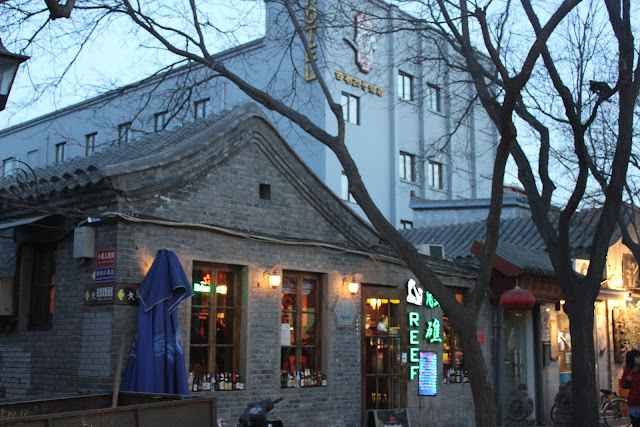 After a set of loony directions (turn left at the Wiggly Jiggly bar, just past Plastered t-shirt store...), we found the Black Sesame Kitchen. We had some time before dinner started at 7, so we went in search of a beer. 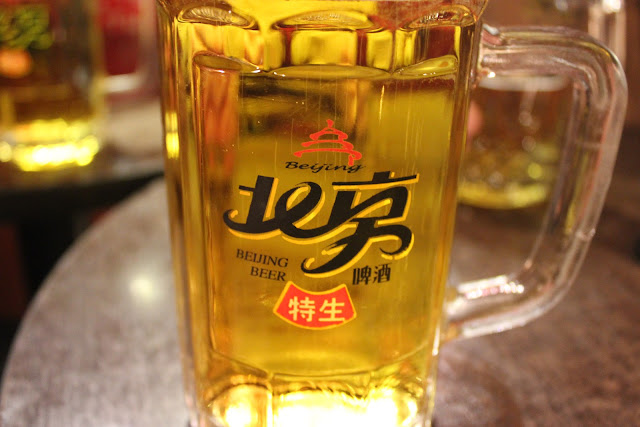 We found a tapas bar (I know, but don't judge us, we were looking for BEER) and enjoyed the happy hour 2-for-1 special. 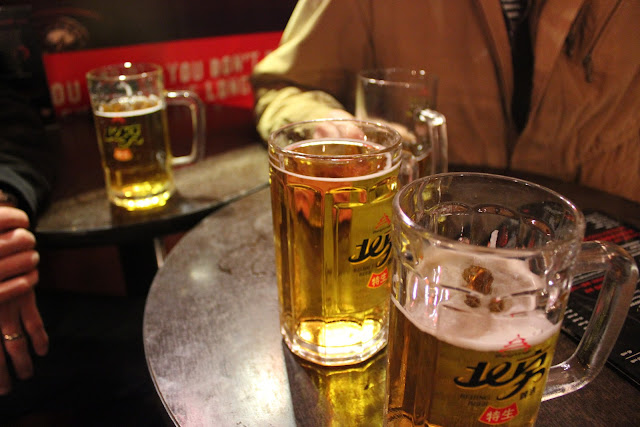 The dinner consisted of ten courses. You join other diners at a huge communal table. Somehow, we managed to score the seats closest to the chefs, who cook right in front of the tables. It was a great example of how much can be done with so little. The kitchen was tiny and open. There was no stove, just hotplates. The picture below is the whole kitchen. That's it. That's where the magic happens. 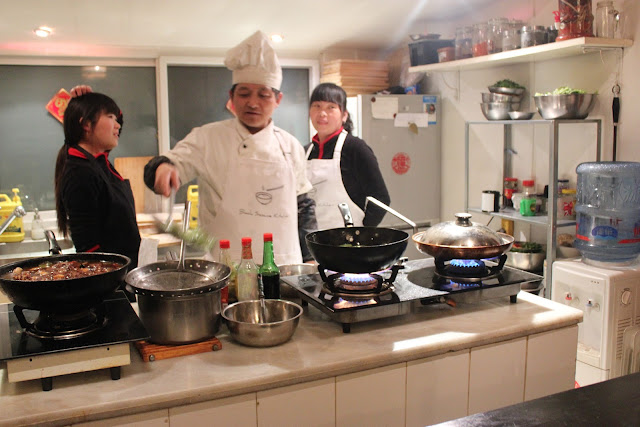 The mix of the group was interesting (and fun). The two gentlemen you see below are Swedes, dining out with their wives. They all live in Beijing and the men work for Samsung. There was a German couple, both still at school. And an American couple on a tour through Asia.

The reason the picture is blurry is two-fold. My camera was a little wonky on the whole trip and the wine and beer were flowing all night. 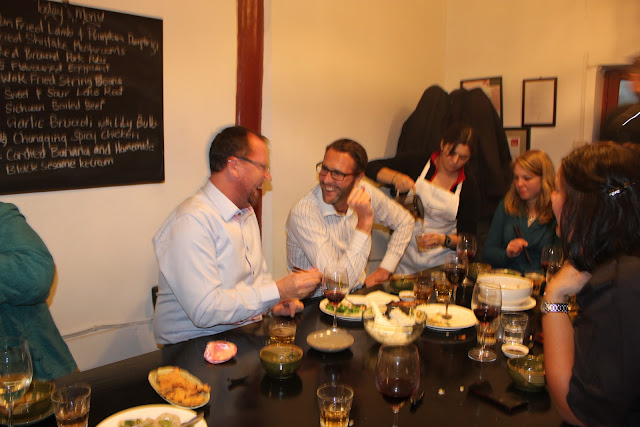 The vat of strange things below is called baiju. It is white alcohol. This one is home brewed with all those crazy veggies and goji berries. It. Was. Lethal. I have tried lots of spirits, but this one was hot the whole way down. I was the only female at the table who had the second shot. I didn't honestly know that NOT drinking it was an option. Too late. 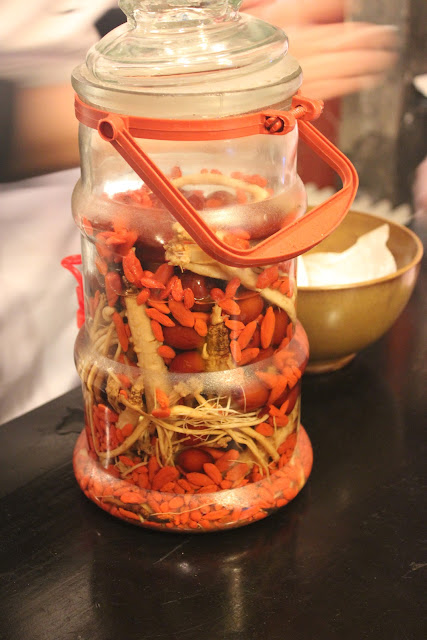 The food was phenomenal. The drink was flowing. Here's the table at the end of the night. 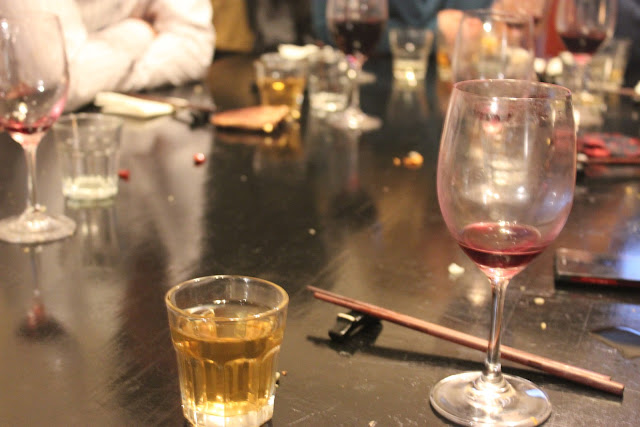 And last, but not least, the delectable fried bananas with black sesame ice cream. They were so crunchy that we had to grab them before the sugar crust on the outside fused them together. 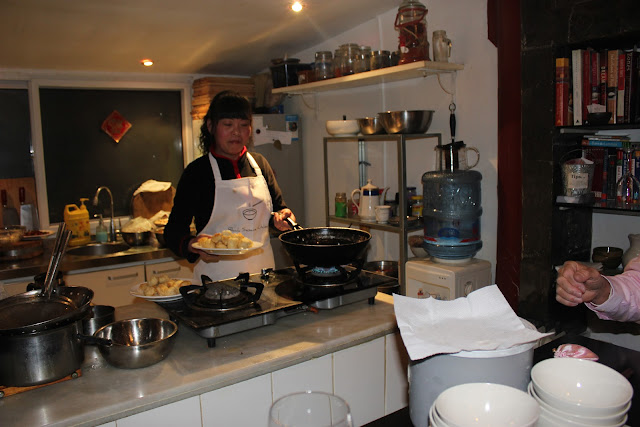 This was CRAAAAZY good. 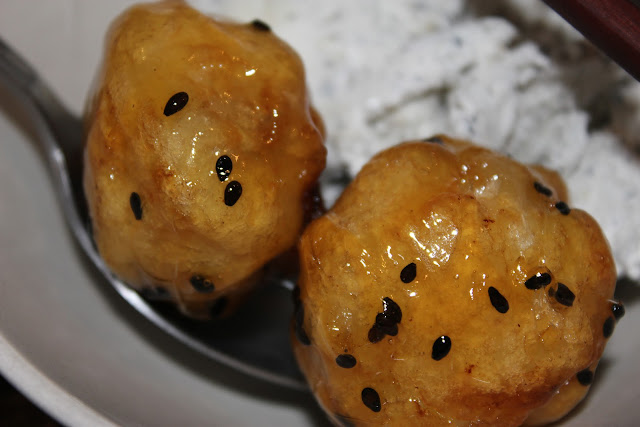 We left, but the night wasn't over. We headed out into the dark hutongs to hunt down another beer or two. Not at all bad for our first night in Beijing. Quick side note: we found the people in Beijing to be truly hospitable, helpful and kind. That first night, I left a bag of purchases in the last bar we were in...a man ran out after us to return it. Later, as we struggled to flag down a cab home, a doorman came out of a hotel and worked for 20 minutes to get us a taxi. He didn't even want to take our tip. Kindnesses everywhere. We noticed them that night for the first time, but not the last. 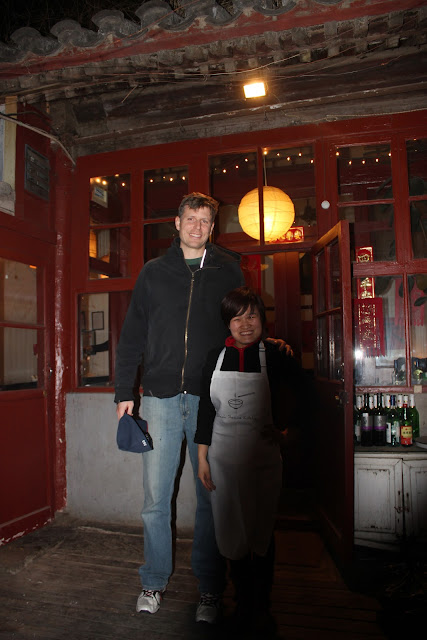