Beijing Day 2: Markets and Monkey Brains (not really...but, who knows..?)

We woke up on the morning of our second day, smug in the knowledge that we had jet lag licked. Who knew a 16 hour time difference could be taken so smoothly in stride? I didn't.

We got a reasonably early start to our day. A friend of Eric's had set up an introduction with two of his friends in Beijing and we had dinner plans that night with one of them. Therefore, we had an empty morning and afternoon, with an obligation to be back at our place by 5 o'clock.

It seemed like a great day to hit the Pearl Market. And, since we had some time, why not walk the whole way there?

It is a BIG city. We learned on this day that the word "hutong", which we had previously imagined as an equivalent to "quaint", is not always quaint at all. Sometimes hutongs are not even alleys. Sometimes they are wide, busy roads. 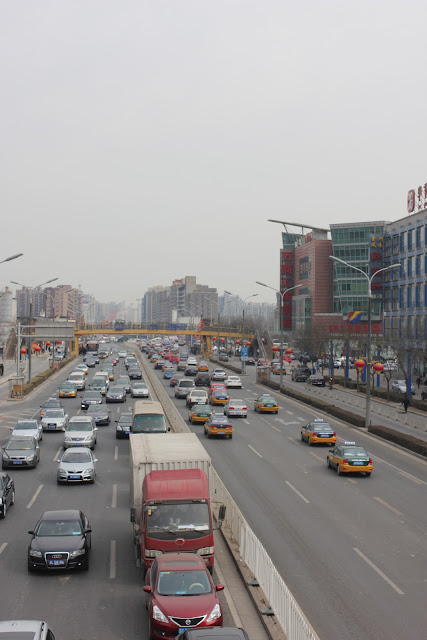 One of the hutongs we passed through on our walk was particularly interesting...and not because it was quaint at all. It was residential and teeming with life. There were high rises on all sides of the narrow, weaving alleys. Tiny stores were littered along the sides of the street every couple blocks, with their wares spilling out on the sidewalk and road. Every square metre was full of...stuff. It wasn't tidy or attractive, but it sure was interesting. It looked to be a very real slice of Beijing life.

We also noticed a lot of these vehicles: 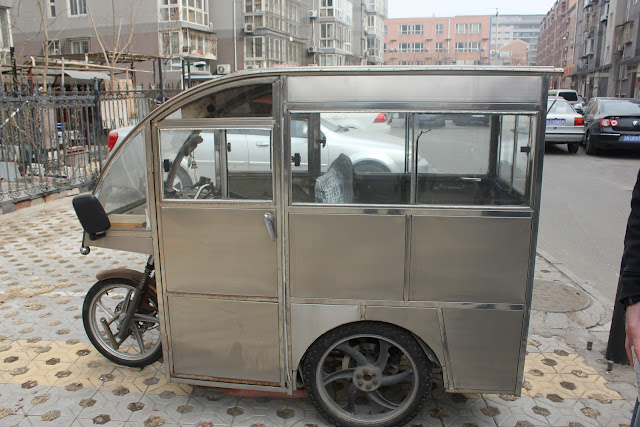 I actually think something like this would be great for Vancouver. It is essentially a trike in a box. We saw entire families riding in the back on the bench. It is basically a family car.

You might look at these buildings and think they look like a slum type of area, but we learned that real estate is expensive in Beijing. These apartments would not be cheap. Not by a long shot. 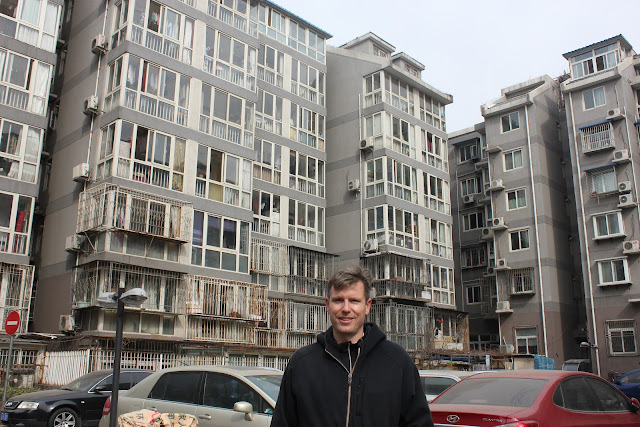 Everywhere we looked, we saw development. The picture below is the new subway line #6 being built. I know Beijing is a huge city, much bigger than Vancouver, but their transportation system puts ours to shame. The subway is immense and well-run. 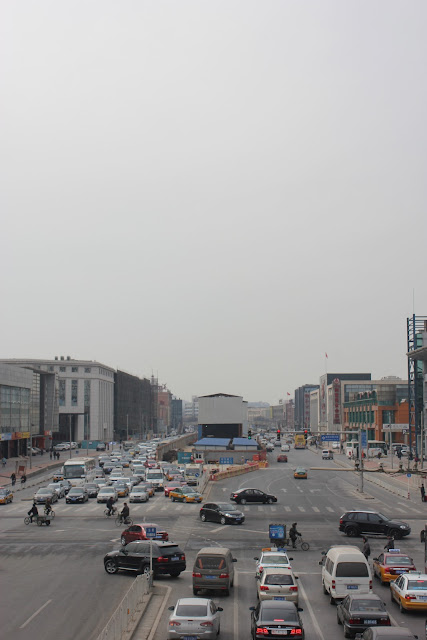 We passed these puppies on our walk. Cuddled on their manhole. 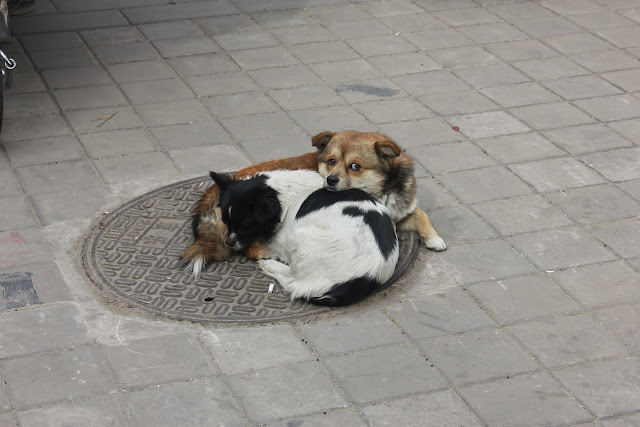 This is an interesting picture, because you can see a bit of how the hutongs look from above. We actually ate dinner at a restaurant just to the right of this shot. We never got a chance to see the interior of a residence like this, but we did go in lots of stores and restaurants. I would have loved to see what a home would look like and how it would be laid out. 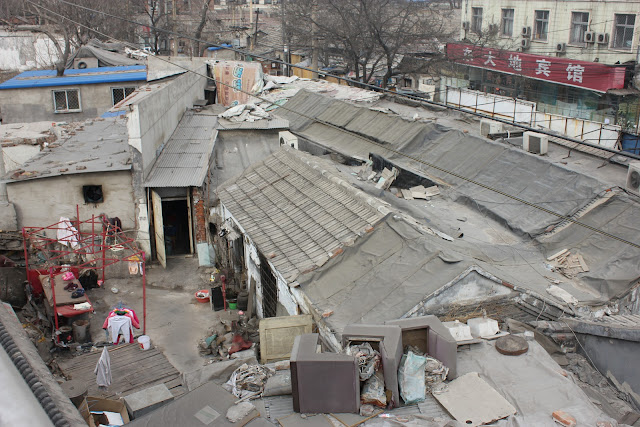 The Pearl Market is in the building behind me. Many storeys of many, many stalls selling tons and tons of crap. That pretty much sums it up. 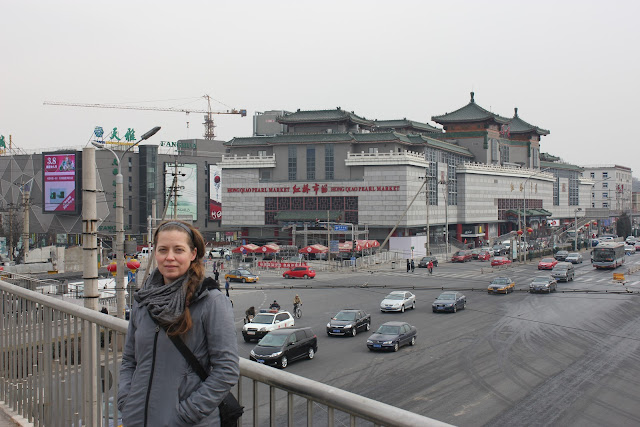 Back home to clean up for dinner.

We weren't too sure what to expect for our dinner out with William and his family. One thing that made our preparations a little easier was that we didn't have many clothing options to choose from...we were hoping for casual.

Luckily, William, his wife Janice and son Jerry arrived wearing somewhat casual clothing. Their daughter Athena stayed home because she is too shy in English, apparently. The location we went for dinner, however, was anything but casual.

William's family arrived in two cars, since we wouldn't all fit in one. We had a crazy car trip through Beijing, weaving and dodging taxis, cars, bikes, scooters and pedestrians. At one point, we were involved in a straight up stand-off in what was supposedly a two-way street, but only had barely enough room for one way. It took about ten minutes, but it eventually sorted itself out. The traffic in Beijing is odd. People are both impatient (ie. Leaving about 1.3 inches between your bumper and a pedestrian who is crossing with the light) and patient (sitting in traffic for extended periods, honking only to inform other motorists of your position, instead of out of anger).


We finally arrived at our destination. We drove into a strange courtyard, flanked by what looked like secret service, complete with headsets and clipboards.

The restaurant, called Guigonfu, is not open to the public. Available only for private dinners, it is a remodelled traditional courtyard house. It was owned by a relative of the imperial family. Today, it is valued as one of the few surviving examples of these beautiful homes in the city.

We were nervous for the food. We were served tea Janice had brought specially from their home. Plates of strange things started to arrive. Oddly, dessert pastries appeared very early.

We were (mostly) pleasantly surprised. Or at least I was. There was very little to startle us. My one misstep was a dish that I thought was warm chicken. It wasn't warm and I don't think it was chicken. I tried to chew it all up, but ended up with a mouthful of splintered bones. That didn't go all that well.

Many of the other dishes were good and some were great. We got a thimble of white spirits (53% alcohol) with a little jug to top it up. We also got a small glass of water from an ancient well. Janice gave us the rest of the bottle of spirits (which was confiscated at the airport on the way home) to take back to our apartment. This was no sipping booze. It was the sort of thing you could feel the whole way down your gullet.
We really enjoyed the conversation with William's family. They were very candid and honest about life in China. We learned a lot.


When the bill came, there was no question who was paying. As much as we would have liked to pick up the cheque for this extravaganza, there was no possibility. And frankly, I am not sure any of us would have wanted to see the final tally. There were a lot of dishes and I am pretty darn sure that joint did not run cheap. At all.

It was a fantastic and memorable evening, but by the time things were winding down, I was exhausted. We were doing really well with jetlag, but I hit a breaking point. I was happy to get back to our place and hit the sack.

Posted by Ericandles at 8:47 PM