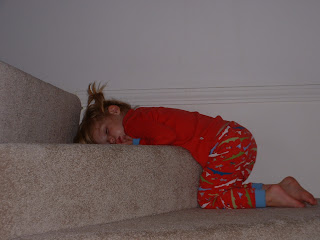 Finny has an incredible power. In much the same way that a camel is able to retain water against a not-rainy day, Finny is capable of turning a thirty second nap in the middle of the day into a long, drawn out night time of bedtime negotiation and stalling.

Ordinarily, she is a terrific nighttime sleeper. Her head hits the pillow; she's out. But let that little kid snooze for a fraction of a minute in the car...game over. Instead of instant sleep...oh, the delays, the questions, the tactics and ploys. I feel sorry for her because obviously she can't help it. You don't go from that good to that bad just for kicks. She has some funky sleep-o-meter that replaces the first three hours of night with a snore and a half in her carseat. I don't get it, but it happens every single time.

The result of this bizarre hardwire glitch is our absolute terror of mid-day sleeps. If Finny's eyes start to go half-mast during the day, Eric and I turn into freakish clowns. We will make the biggest fools of ourselves in an effort to keep the Fin alert.

Today, we lost that battle.

Sleep was achieved briefly while we were enroute today. It was a long evening getting that tiny girl to sleep tonight.

At one point, I asked a tearful Finny what she thought would make me happy (strongly hinting that her going to sleep would be high on the list). She thought about her answer for a long time. Then, this: "Flowers, Mummy? Me make you flowers?" I told her that was a nice thought (and one that her father might want to arrive at once in a while).
Posted by Ericandles at 11:08 PM