We went to our very good pediatric dentist today: Dr. Millenaar. The girls got a clean bill of dental health. And they did a great job of being cooperative and helpful, which apparently is not always the case with kids at the dentist. Molly, who because of past experience has some trepidation, was immediately put at ease by the dentist who employed her as his assistant in counting Finny's teeth. He would point at a tooth and then pretend he was unable to remember how to count. Moll was all over it. She was very proud to be able to inform her dentist that four did in fact come after three. Less impressive to me, she didn't question that her dental health professional was that dumb...I think a good patient would inquire at that point how he possibly managed to graduate from dental school without knowing his numbers. If I were her, I would have been suspicious.

Finny was a great patient. The hygienist commented that she was the best under three year old she'd ever dealt with. Which was possibly true until about five minutes later when Finny puked all over both of us. She was a trooper about it, especially considering I don't think she's ever vomited before. Still, a messy situation. Might have knocked her a couple of notches down the under three list.

We came home and as I was in the kitchen, I heard Molly reading Finny a story. I came in to see this: 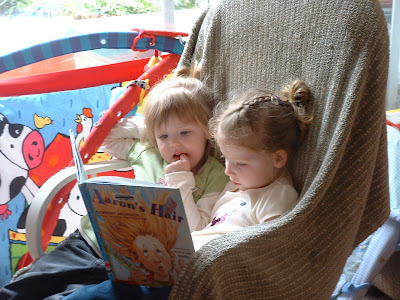 Oh, and Lukey says "Go Canucks Go" for this evening. 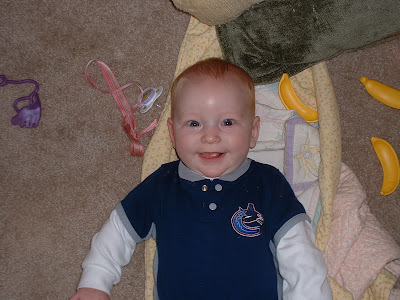 What he doesn't have a contract yet?