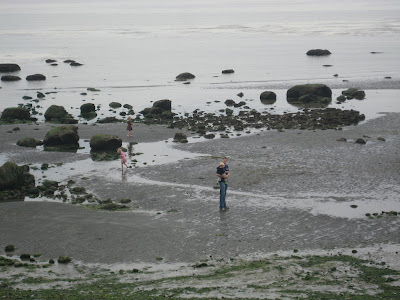 I will warn you right now that posting here will be (even) more sporadic, as we will be on a steady and unpredictable commute between here and Point Roberts for the rest of the summer.

Which brings me to the topic of time. Basically...time is flying by. How do I know this? In the small space of time since I last wrote here, I have newly acquired a four year old and a kindergarten graduate. These little girls used to be babies. 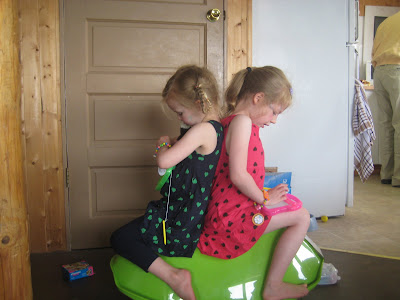 Now they are off doing stuff. Running around with friends. Expressing their own opinions. Reading. I mean...geez. Didn't they just get teeth?

Finny turned four last weekend. I am happy for her and she will be a Fantastic Four, but I have to be honest. I will really miss my three year old. Finny's year has been filled with a million firsts. She was a precocious and spirited three, tearing around on her Like-A-Bike and asking questions to stump a philosopher. A quick example? How about, "Mumma, how did you make my bones in your tummy? Did you dig up dinosaur bones to build me?" Uhhhhh, no....I actually 'fessed up on that one and admitted I had no real idea how I made her bones.

Finny can be rough. She grits her teeth in the underbite of determination and comes out of a corner with fists flying. She takes on life headfirst. In fact, the sizable scar now gracing her forehead can attest to that. She is fearless and tireless, first up in the morning and revving until her head hits the pillow. She is a force.

Not all the time, though. Just before her birthday, Finny made a special request to hear the song "Slipping Through My Fingers" by ABBA. It it the saddest song I can think of, telling of the heartache of children growing away from parents. The time lost. Sweet Finny knows that I get choked up listening to it, so she made the request to Eric while I was out. Later though, she picked a quiet moment and asked me if I knew why she wanted to listen to it. When I turned towards her to answer, I saw her eyes brimming with fat tears. She continued, "Because I feel like I am slipping through your fingers. I'm going to be four. It is too fast." Alrighty then. Cue my tear ducts...clear your schedules all you ducts, because you are now on overtime. I thought my heart would squeeze to mush on the spot. Like real pain. It actually hurt.

Her birthday was spent at my parents' place in Point Roberts, celebrated with a big brunch with Solly's cinnamon buns serving as the cake. She was heavenly. 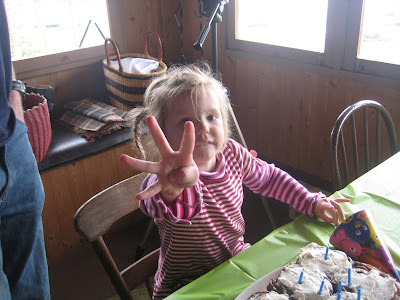 And her sister handled herself with grace, mostly happy for her sister and the many gifts she received. 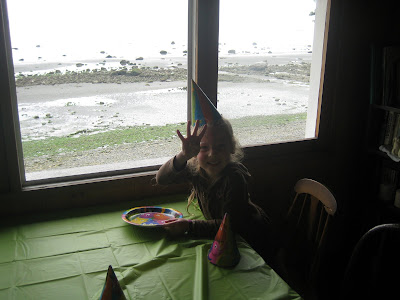 It is made easier to stomach when most of the presents are shareable...like MarioKart for the Wii. Thanks Uncie...the girls had a blast. And my mom spoiled them with treats, as she always does. It was a good day. Even though it was...oh, a little bittersweet.

And then on to more rites of passage, as Molly exited her kindergarten classroom door today for the last time. It seems like yesterday that she headed off to class with a mommy shirt stuffed in the pocket, ready in case she needed a quick sniff of reassurance. Ummm, if you don't know what I am talking about, I won't scare you with an explanation. She didn't know a soul in her class on that first day. You would never guess it today, as she sprinted around the playground after her last dismissal with all her little buddies sprinkled around her, laughing and hugging. The nicest group of kids I could ever have hoped to share this first intense journey with her. A few families settled in for an extended picnic after school, eventually moving to the Granville Island waterpark 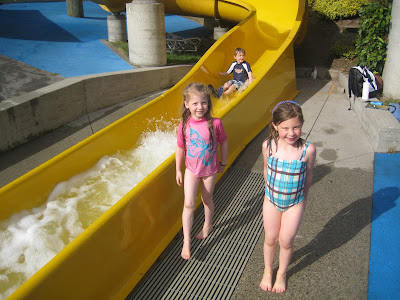 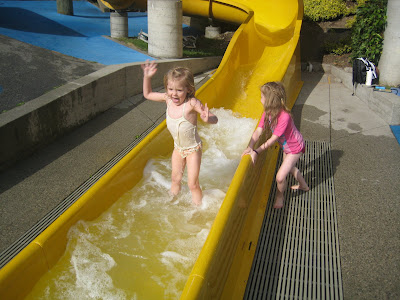 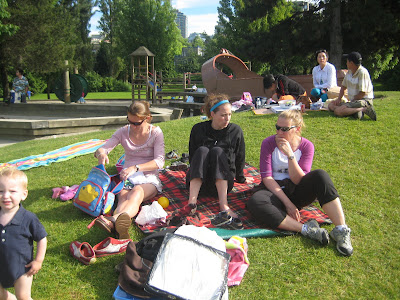 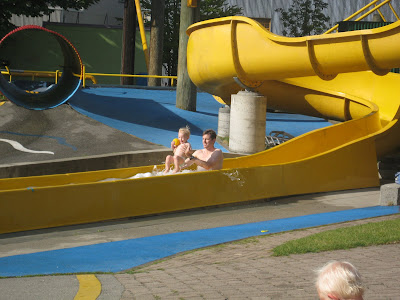 Nary a squabble. Few tears. Just good times and giggles filling the air around their great little group. It was a most perfect day to end a great school year. Oh my God...the school year. We're those people...you know, parents of school-aged children. How on earth did this happen?
Posted by Ericandles at 8:36 PM