I played my first ever wheelchair basketball game this week with 6 other guys from my department.  We weren't a great team but weren't the worst either.....which apparently is a big step up from previous years.   It was a fun day but one which I have paid for since.  My fingertips have been bleeding for days on two fingers and peeling on a few others.  Apparently I have some very wussy hands. 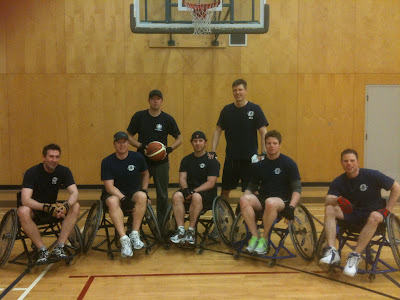 Luckily I got to feel a little more basketball success when I played with my men's league team in the final of the Delta League.   It was great to be back playing in a meaningful (I use that word very loosely..... but at least the teams care enough to be playing hard on defense) game for the first time in a long time.   Despite some controversy about whether I had played enough regular season games, I was allowed to play in the finals.  We won by about 10 points against the Meralomas and I played pretty well.  Despite getting hit a couple of times and sprinting faster than I have for since my surgeries, my body felt good.....and wasn't even too bad the next day. 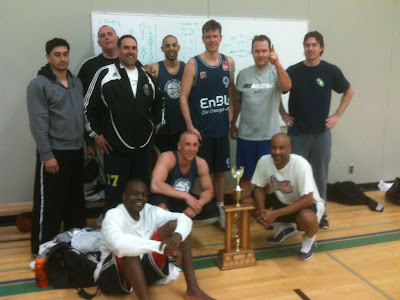