I do. In how to properly (and in a timely fashion) dress a little hockey player.

Today was Lukey's first hockey lesson. We have jumped the gun a little and put him into the first hockey skills lessons available, which are intended for kids born in 2005. Not kids born at the end of 2006 like he was. Even though he is at least a year younger than everyone out there, he was game to give it a go. So why not?

Eric was away, so I was on deck to shop for all the extra gear Lukey needed. I thought, "whatever, no big deal..." and set aside about half an hour to run into Cheapskates and snag the stuff.

It isn't easy to track down the 1,241 items that are "standard" equipment for hockey. Especially in XSmall. Three different hockey stores and over $150 later, we had...a new helmet and full-face cage, a pair of very mysterious protective cup shorts that had Lukey and I in hysterics in the changeroom, complete with a strange velcro garter belt system for socks, two miniature and very stiff gloves, shoulder pads that make him look like a buffed up gladiator, shin pads, stripey socks, elbow pads...argh. And the u-haul to transport them. Just kidding. He doesn't need a u-haul. He has me: sherpa-mother.

That was yesterday. So today, we headed to the rink at about 3:30 for his 4:15 lesson. I wanted to leave lots of time to get him dressed.

Yeah, good thing too. It took forever. I am thankful for two things:

1. We were alone in the change room, so no one had to witness me LOOK ON THE INTERNET for instructions on how to attach his socks to those velcro flaps.

2. Lukey has a great sense of humour and we laughed and laughed. When I had to shove his sleeves up his arms, virtually cutting off his circulation, to get on the elbow pads I'd forgotten about until the end, we were both laughing so hard that anyone in the area would have assumed we were deranged. Oh, and when his little jock strap was free floating around his knee caps and he said, "Mumma, this can't be right..." and we realized that there were leg straps...it was funny.

It took a full half an hour to get him geared up. I still wasn't sure I had it right. I think they should offer parents lessons too. 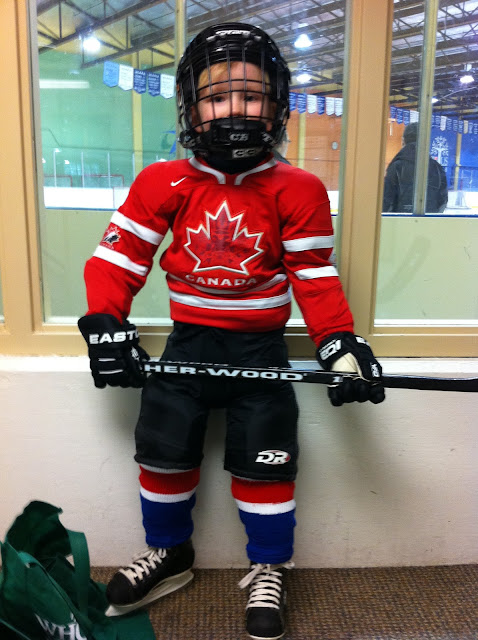 Luckily, it was worth it. I was so proud of his attitude. He was the smallest, youngest and certainly the least experienced player out there, but there was no stopping him. No one took the time to explain the drills to him or outline the rules to British Bulldog (?!). They just threw him in with the rest of the kids, who have already had a year of hockey.

In the first five minutes, he fell pretty hard. I had to stand on the sidelines as all the equipment we had spent half an hour strapping onto him prevented him from getting himself up. He was so bulky in all that armour that his joints weren't working the way he expected. He tried a dozen different ways to get up, with dogged persistence and no tears or outward signs of frustration. I used all my willpower to stop myself from stumbling out onto the ice in my clogs to help him.

An instructor finally heaved him back up onto his skates. Thank goodness, because I was weakening over there in the bleachers.

He can learn the hockey skills. He'll know all those drills and he'll understand British Bulldog. That just takes time and repetition. What he can't learn is a positivity and determination. What he needed most today wasn't elbow pads or a jock strap (although they are helpful...). He needed something he already had, without all that junk strapped to him: a great, open attitude.

Maybe no one else noticed that tiny guy working his heart out to keep up with the big kids, but I did. And I'll never forget it.
Posted by Ericandles at 11:38 PM

You cannot have a picture of Lukey looking like that and not provide a note of warning. I just guffawed tea out of my nose. Best. Picture. Ever.