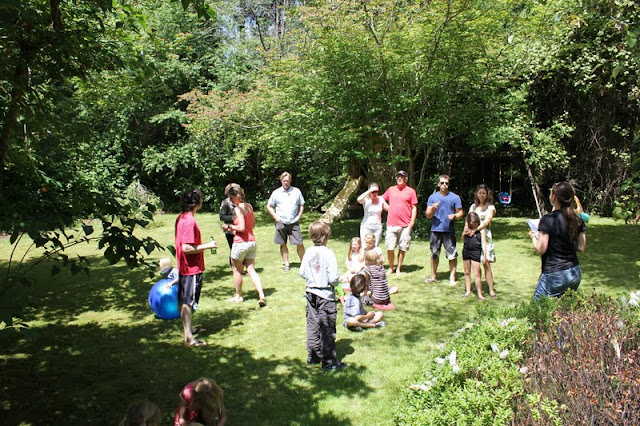 Last year, we hosted our very first "car rally" style scavenger hunt in Point Roberts to celebrate the end of the school year. Luckily, our friends are the tolerant kind and they submitted themselves to the same torture for a second year.

Last year, Eric wrote the clues and acted as the course commissioner. I had so much fun on his hunt last year that I thought it would only be fair to take turns. I took over the clues and Eric got his own car to command.

We met up in our garden to fuel up with veggies, fruits and chips. After all, there were three hours of straight up hunting and gaming to get through before we'd be done.

The group gathered to hear the rules (and arrange a bit of car juggling...Molly joined Maya in her family team and Finny and Delia teamed up with Eric). That picture shows Simon using his body to describe how much fun the hunt would be... 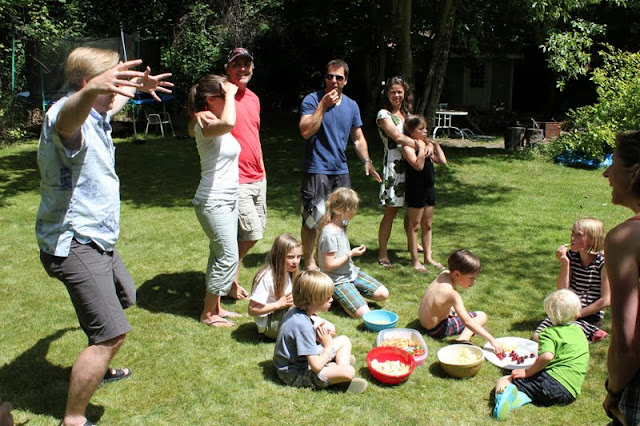 This shot is Eric scrambling through the local newspaper for the answer to a clue. He is competitive. I don't know if I have mentioned that here before. There was much debate over how much of an advantage Eric had as a competitor. He had the obvious advantage of knowing Point Roberts very well, but he was the only team leader without another adult in the car. 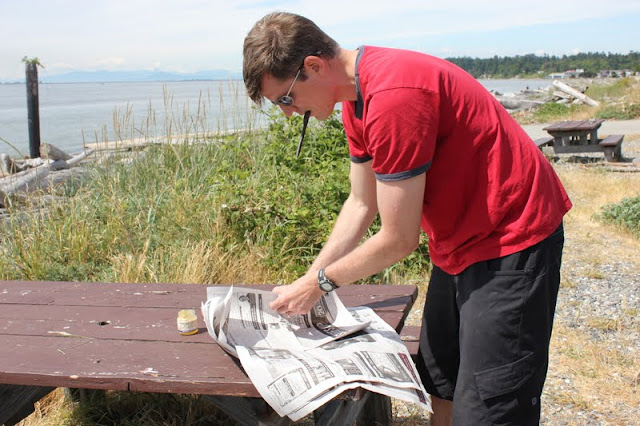 Here is Eric's team forming the letter "B" for "Butler. Poor Delia. And Finny, really. Oh, pity them all. Oh, and that jar on the picnic table is the baby food I made the teams eat. Last year it was chocolate bars. This year, I decided to make them really work for points. Extra points for choosing vegetable based baby food. Those peas really reeked. 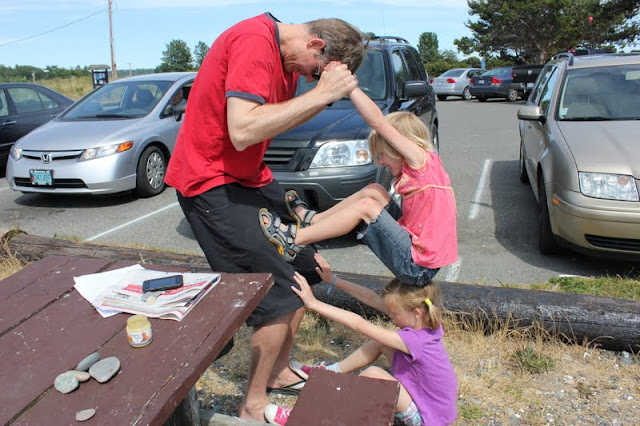 There was swimming, which was similar to last year... 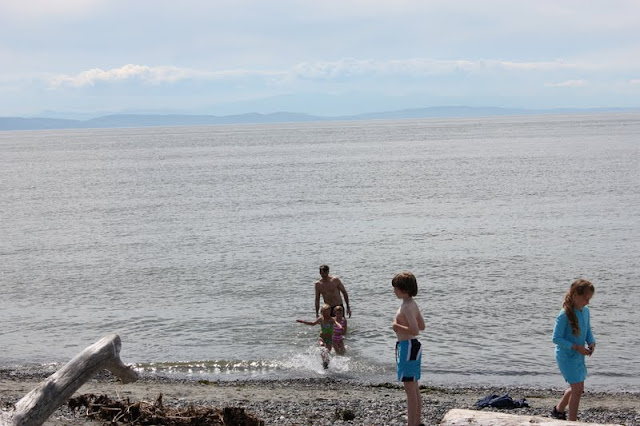 ...but I introduced a new event that I expect to see repeated. The "hands-free doughnut eating contest". The spectator value on this one was huge. I liked that contestants were allowed to pick their own poison. They picked from a random selection of doughnuts...adults went for strategy, kids went for flavour. We learned that the cream filled ones are NOT the way to go. Unless you are there as a spectator, in which case, all cream filled is the best choice. 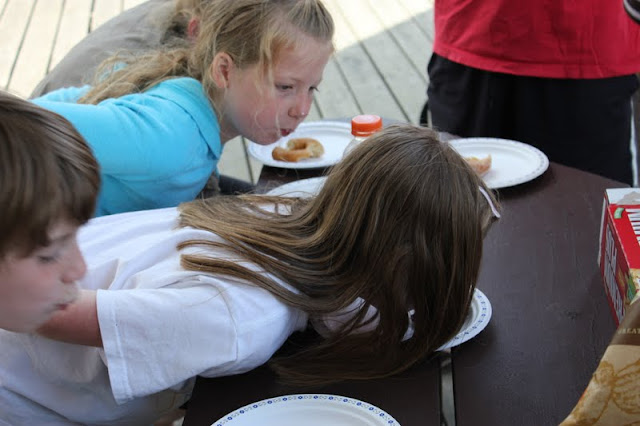 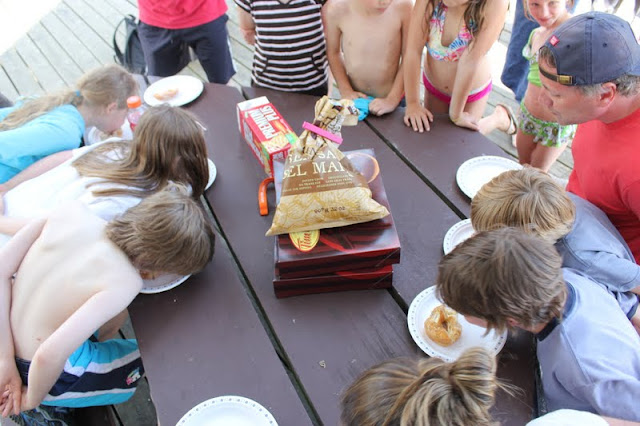 If these shots are shaky, it's only because I was laughing so hard. 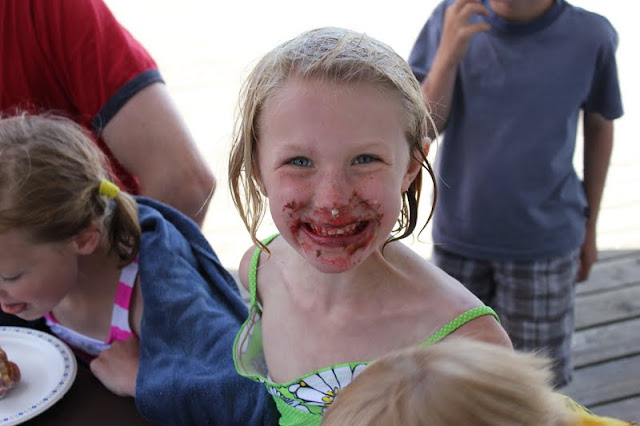 I should note here that Lukey's performance, while mostly unnoticed, was pretty incredible. He was the unsung hero. I saw you, buddy.

Up next was the cracker eating contest. Kids were up first. Ben took this one. 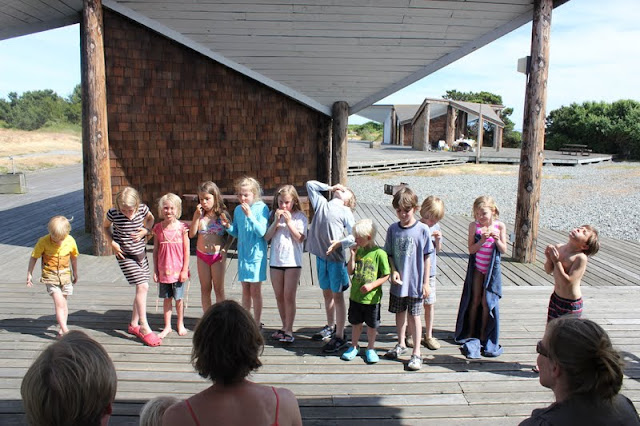 Then the grown-ups. We had to whistle after four crackers. Not easy. 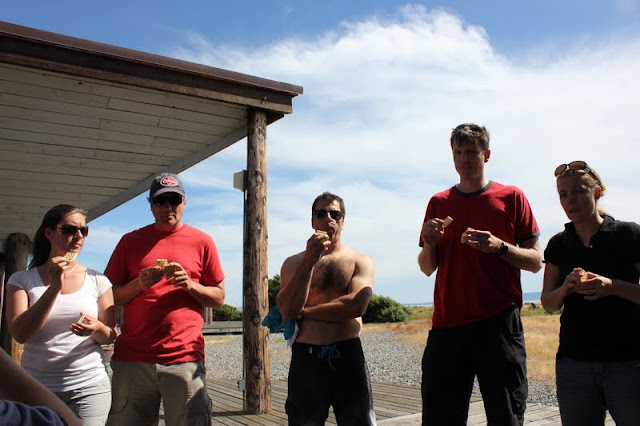 The results? Well, Team Butler was strong. They had the highest point total, but with adjustments for advantage as a semi-local, the title this year went to the Kaplun/Mulcahy team. Last year's champs, the Braun/Grants, went away disappointed. It was a 10 point difference, which is a true heartbreaker. I think they'll be swimming next year. 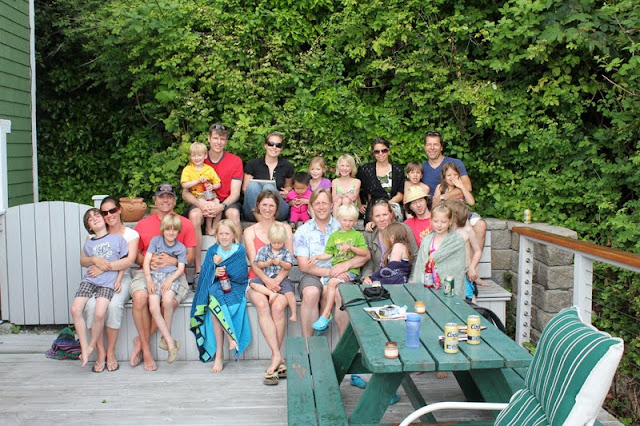