You know, how we continue to be optimistic and naive about the time it takes to pull together our family for a week long trip is beyond me. Our family psychology could be a text book example of the power of the mind over overwhelming evidence to the contrary. No, we cannot pop out the door with a backpack and a baggie with our toothbrushes in it. No, we cannot wake up in our bed in Vancouver at 10 am on Sunday morning and then expect to motor out of the Point Roberts Marina by noon. And yet, like dim-witted Disney characters, we are positive beyond all reason that we can achieve anything.

Our original plan was to head down to Point Roberts on Saturday night, then get an early start Sunday morning. Instead, we had a great evening out at our friends Mike and Kate's house watching the Canucks game. The sun was shining, the kids were playing happily and the television was set up outside. It was impossible to tear ourselves away. So…plan B was to get up early and head done to Point Roberts, quickly throw our stuff into the boat and sail off NOT into the sunset (i.e. long before the sunset).

Plan B got off to a rocky start when we slept in until 10. It was even rockier when we hadn't even arrived in Point Roberts by 1 pm (it's a good thing I am writing this blog post, because there is no way that Eric would ever admit to the massive detour and plan-killer that was the retrieval of his laptop from a distant firehall in North Delta). When we got to PR, we had to stop by the cabin, then head to the Marina to load the boat.

Argh…it just takes so long. It was the lowest of low tides, so the ramp that goes from the parking lot to the dock below was basically the steep drop you'd see on a world-class roller coaster. With many fewer safety precautions. In fact, when I went to take my first trip down fully loaded, I grimaced in Eric's direction. When you have been married for a long time, you can speak volumes in a single glance. It was one of those word-free conversations. I looked at him to express my misgivings about taking the Wheelbarrow of Doom down the Ramp of Death. He looked back at me and clearly expressed his disbelief at my cowardice and all-around lameness. Well, what could I do? I pointed my oversized rubber wheels down the ramp and went for it.

I nearly died. No, really.

I wanted to make sure I didn't drop our groceries, clothes and other supplies down the ramp and catapult them into the water, so I decided to turn around and walk backwards down the vertical line that was the ramp. It was suicide. If not for a last second brainwave to jam the handle under the railing and hold on for dear life, the W of D would have shot down the R of D and after dragging me down the metal-grate, it would have run me over before flying top speed into the ocean. Instead, I calmly called to my husband. I told him that I "needed assistance immediately". He came to my rescue, but there were raised eyebrows and poorly concealed smirks flying. Until he tried the same manoeuvre, then asked for my help…!

Well, it turned out that we rode off into the sunset after all…it was a later start than we had hoped for at the initiation of The Plan. Plan W, or whatever letter we were up to by that time, had us motor over to Patos Island to tie up to a float for the night. It was only a two hour cruise across to Patos, but in those two hours we had a bonanza of wildlife sightings and we felt like we were finally on holiday. We tied up, got out dinner stuff, played a couple of games together…before we noticed that the whole front cabin was filled with more than the regular pong of boat…more like the smell of straight diesel.

Long story short, there is a little leak in the engine somewhere that caused us to scratch our heads a touch, untie again, motor back out to see what happened in the engine, and calm down the protests of the impatient natives (the kids) that we were somehow turning around and heading home to Point Roberts ("What…? That was the whole holiday…? We aren't staying…?"). We satisfied ourselves that the issues weren't catastrophic and went back into the bay at Patos and tied up AGAIN.

See Molly's smiling face? It wasn't like that while we motored back out to sea... 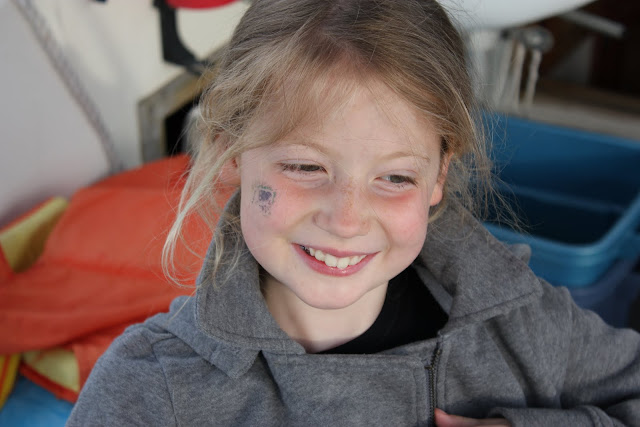 The sunset was spectacular. It went from this bright orange slash across the water... 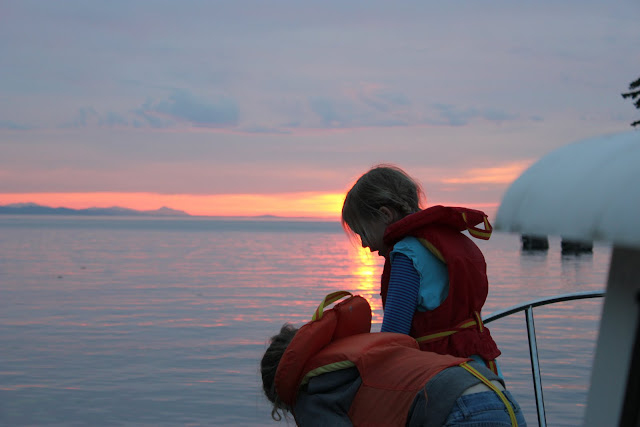 ...into this crazy pink flamingo sky. 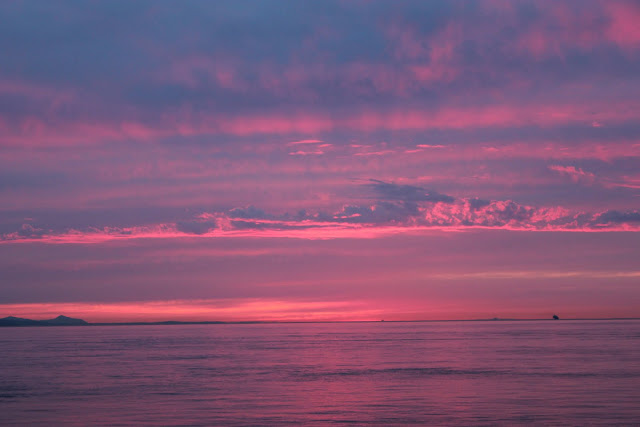 Morning came. I slept fantastically well. Our sleeping arrangement is that all five of us form a Tetris puzzle in the rear cabin of the boat. There are heads crammed into ribs and feet pushing into cheeks. Molly and Finny sleep sideways in the middle, between me and Eric and Lukey is a floater. The strangest part of this jigsaw nighttime routine...? There is a whole other cabin in the front of the boat with room for at least three people to sleep. It goes empty. Why? Not sure. I guess we're a close family.


Eric boiled water for my coffee (which tasted divine) and we set out for Anacortes. 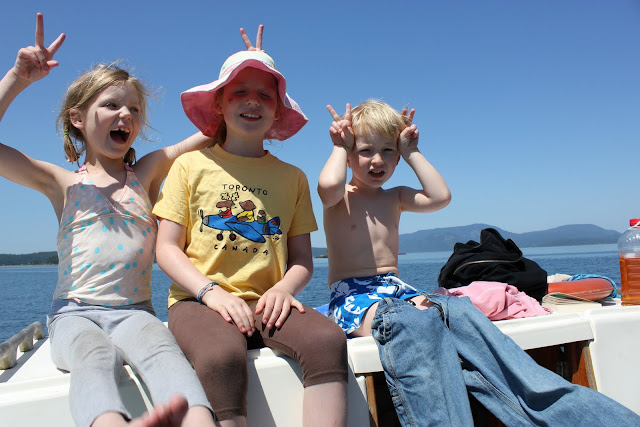 On the way, we couldn't resist a quick picnic on Spencer Spit on Lopez Island. It's a very cool geography that was, unsurprisingly, a favourite of First Nations people. Much like us, they stopped there en route to other more permanent places. They stopped for clams. We stopped for turkey sandwiches. I wonder what they would have thought of sliced turkey on buns with avocado, cucumber, lettuce, cheese and tomato? 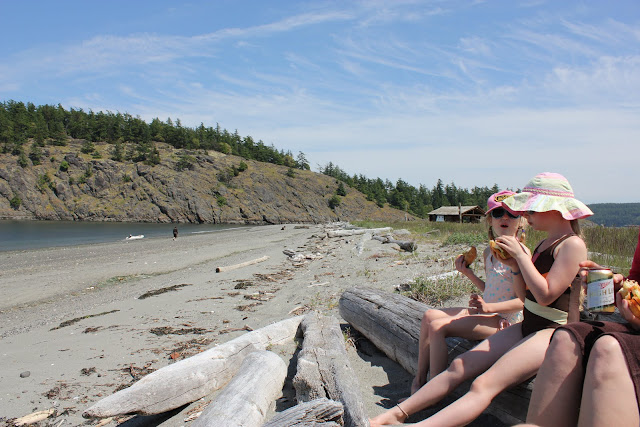 Below, you can see Finny in front of both our landing dinghy and the ship we call home, the lovely Pacific Pride. 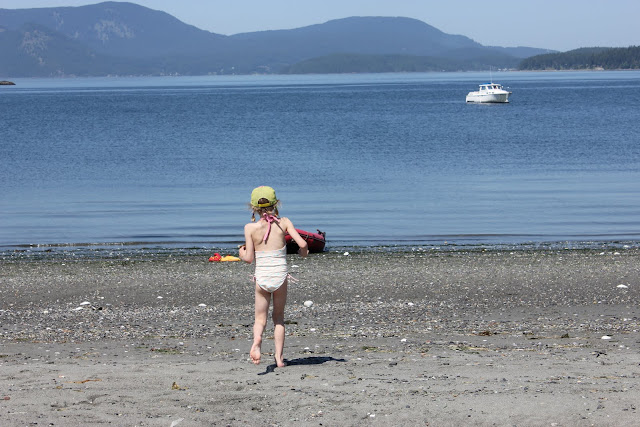 Lukey, Molly and I went for a walk around the area, which is actually a great car-accessible campground. It was an old homestead site in the 1880s and is now a Washington State Park. 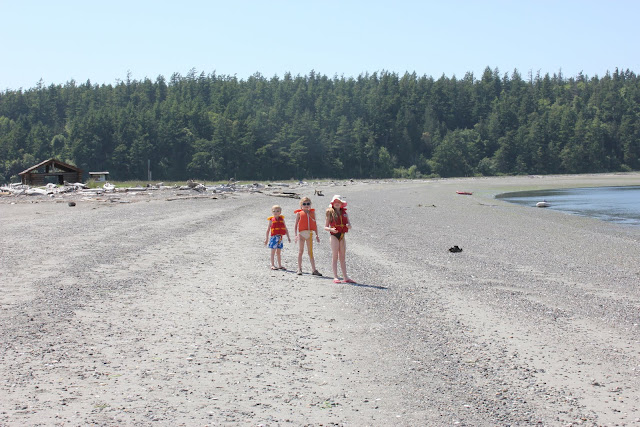 The kids all went swimming. Fools. I mean, brave souls. 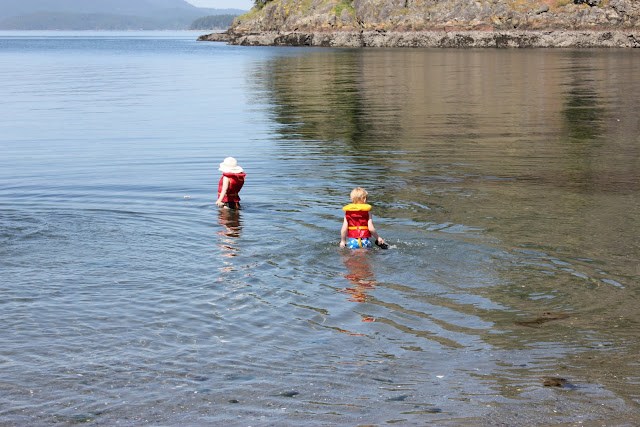 Eric and I have discovered that tying up to a float is a much more relaxing situation than anchoring. I know we will do more and we should get better at it, but our trip up north in the boat last summer was a little nerve-wracking. I like the peace of mind that comes from lashing up to one of these babies: 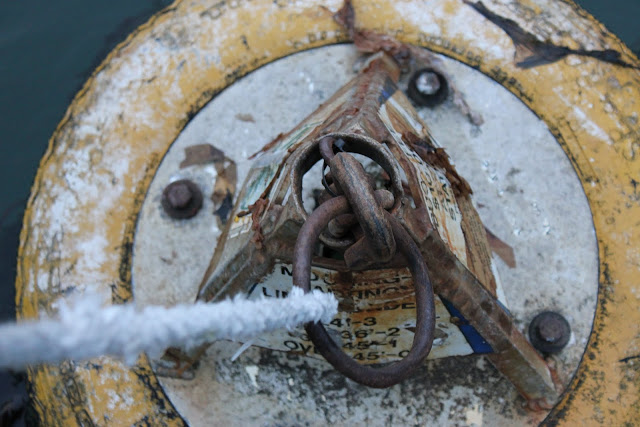 And, if there could ever be a more stereotypical father/child moment...Eric taught the kids to skip rocks. It was pretty much Eric skipping rocks. He seems fairly pleased with his best effort... 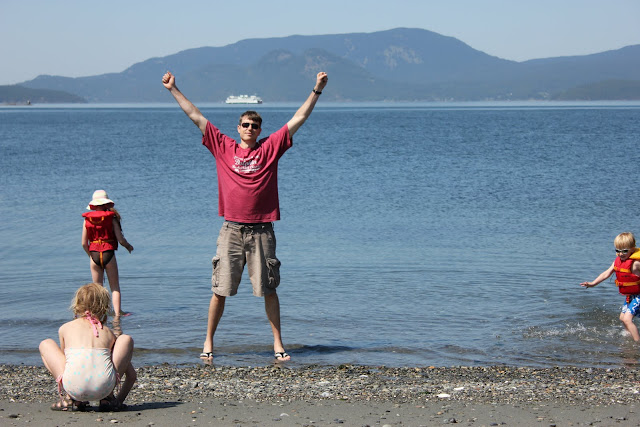 We packed up and headed off to Anacortes. We were trying to get there in time for the Canucks, but didn't get into town until the middle of the game. While we scrambled to find a place to watch it, we stumbled onto some wifi and saw the score. We decided to have dinner on the boat instead.