Once we left La Connor, we had an interesting trip through the rest of the Swinomish Channel and then a long cruise to Oak Harbour. The clouds had moved in, so the overcast sky drove us all to our separate pursuits…well, as separate as you can get on a tiny boat. I drove while Eric read, Molly read, Lukey slept and Finny played on my iPhone. I listened to three Vinyl Cafe stories en route, then made the kids listen to one of them (The Waterslide, in case you are interested…it's hilarious). 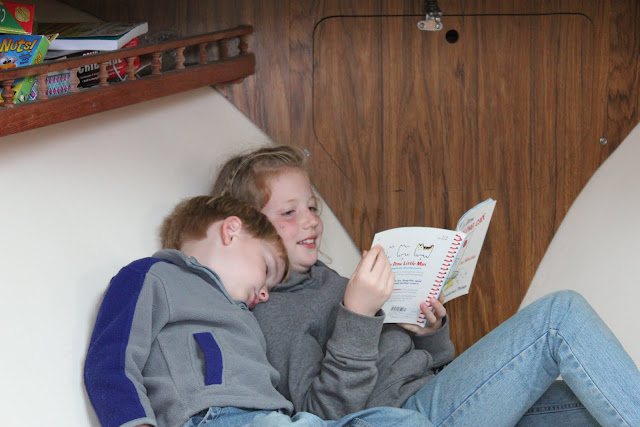 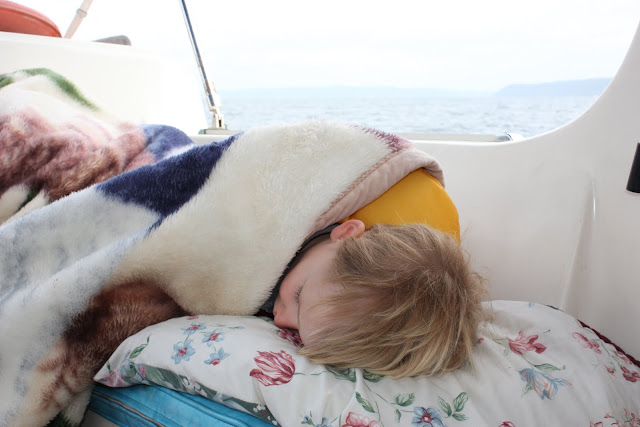 Oak Harbour's marina was well outside of the little town. It was on the late side when we pulled in, so we decided to skip a walk into civilization and hunker down for the night. I thought the chilly evening called for a warm dinner, so I pulled out the pasta and set to work lighting the alcohol stove. Eric was off trying to sort out the reciprocal club arrangements for the night, so I lost my usual sous chef (he is usually the stove lighter…they freak me out a bit, plus I figure that as a firefighter, he should make himself useful). On my own. Not. Good.

I had, how shall I put it, a STRONG flame on the stove. The good news is that the water boiled fairly quickly as a result. The bad news is that my stove confidence was shaken. I have stuck with it and the stove and I have come to a bit of an understanding. A little bit. Actually, not so much. I still don't really get it, but I'll keep trying. No temperamental stove will get between this girl and her morning coffee.

Yesterday was our iffiest weather day forecast, so we decided that we'd hoof it to Shilshole Bay, a suburb of Seattle. It was a solid six hours underway, but the kids were troopers. We arrived in at about 5:30 and figured we should walk a little bit into Ballard and see if the Canucks game was on tv anywhere we could take the kids. We enjoyed a really nice walk along the waterway towards the Chitternden locks system that we planned to hit the next day. We got to walk onto the locks themselves and we tried to explain the lock system, which the kids dubbed "the boat elevator". They were excited to see it in action, though a little nervous about the number of people watching the boats in the locks. Stagefright for our turn.

We asked the lock guys where we could catch the game nearby. The consensus was that the Stanley Cup Finals were not the priority in Seattle that they are in Vancouver. There was a lot of shoulder shrugging and looking around for another guy to ask. We popped into one of their recommendations, a little dive called the Lockspot, just outside of the Lock park gates, not really expecting much success. Instead, we found a tv to ourselves, CBC feed, cheap beer and killer fish and chips. It was great.

The game, on the other hand…

As so often happens when the kids are away from the routine of school, within days our family shifts to its more natural rhythm of staying up late and waking up even later. This morning was proof. We cracked our eyes at 10:40 am. While I love a good sleep as much (actually, far more) as anyone, it does make me feel like we are at odds with the boating community. They seem to be a much more of an "early riser" kind of crowd than the Butler/McKnights. Story of our lives, really…

We only had a hop, skip and a jump to motor before we were into the locks. There are two locks in operation, one large and one small. It is a serious business, with big fishing vessels passing through to travel into Lake Union and Lake Washington. As far as we know, our boat has never been in fresh water, so it was a right of passage for our Albin too. I have to admit to a bit of stagefright myself as we approached the locks. The last thing you want to come off as is the biggest goofball novices on the water. Those lock guys mean business. They shout out directions on the loud (and I mean LOUD) speaker for all to hear and they expect things to happen fast. There are ropes flying and knots to be tied. We made it through with minimal embarrassment. The kids got water safety colouring books handed over at the end of our "elevation" and they were tickled, waving to the people gathered around to watch the locks at work. 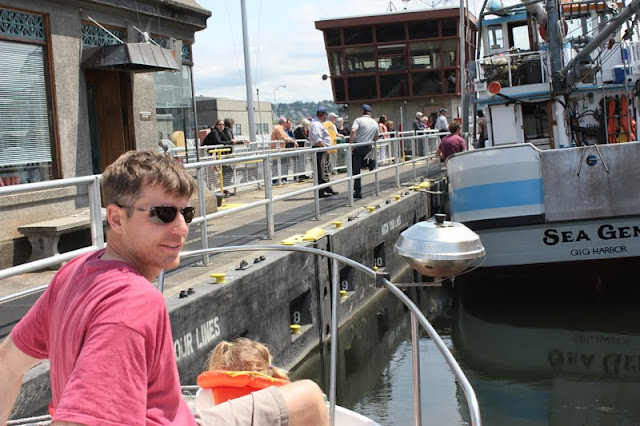 The trip into Lake Union was amazing. Partly because I think I know Seattle a little bit and it looks so different from the water, patly because it was incredible to see the mix of working boats, pleasure boats and best of all…dreamy houseboats. Oh, the houseboats. We had a great journey though Lake Union into Lake Washington. We cruised along gawking at the enormous houses on the waterfront. We think we spotted Bill Gates' place, or at least the one we would build if we had his money. We docked at Meydenbauer Marina, reciprocal guests of the Yacht Club. It is the first place we've stayed on this trip that is truly a Yacht Club, complete with a clubhouse mansion and some VERY spiffy boats. We launched our dinghy with its new motor and explored the local park for happy hour. Then after dinner, we walked into Old Bellevue, which is basically Kerrisdale or Ambleside on steroids. It's fancy. And you know, we barely stood out in our day-five of the trip grunge. Barely.

Tomorrow, I am going to wake up at a more decent hour (yeah, right) and walk back up to old Bellevue for a fancy coffee to start my day. Then, we'll explore around Mercer Island and likely tuck back into the lap of luxury here at the Yacht Club. The local Safeway has a television lounge (!) and we'll try to watch the Canucks game there.

Posted by Ericandles at 8:34 PM