Start of Track and Field Season 2014

Exactly one year ago, Finny went to her first track and field meet. It was out at the track at UBC and it was essentially a monsoon for the entire two days. It wasn't the smoothest introduction to the sport, but Finny took to it like a duck to water (ha, get it? It was wet that weekend...). Since then, she has trained hard and she's really excited to embark on her second season of track and field with the Vancouver Thunderbirds.

At least this weekend we didn't have to contemplate escape routes from rising water...! It wasn't exactly warm, but it was dry.

The girls picked up right where they'd left off last year: flopping around like overactive puppies, all long limbs, track spikes and blond hair. 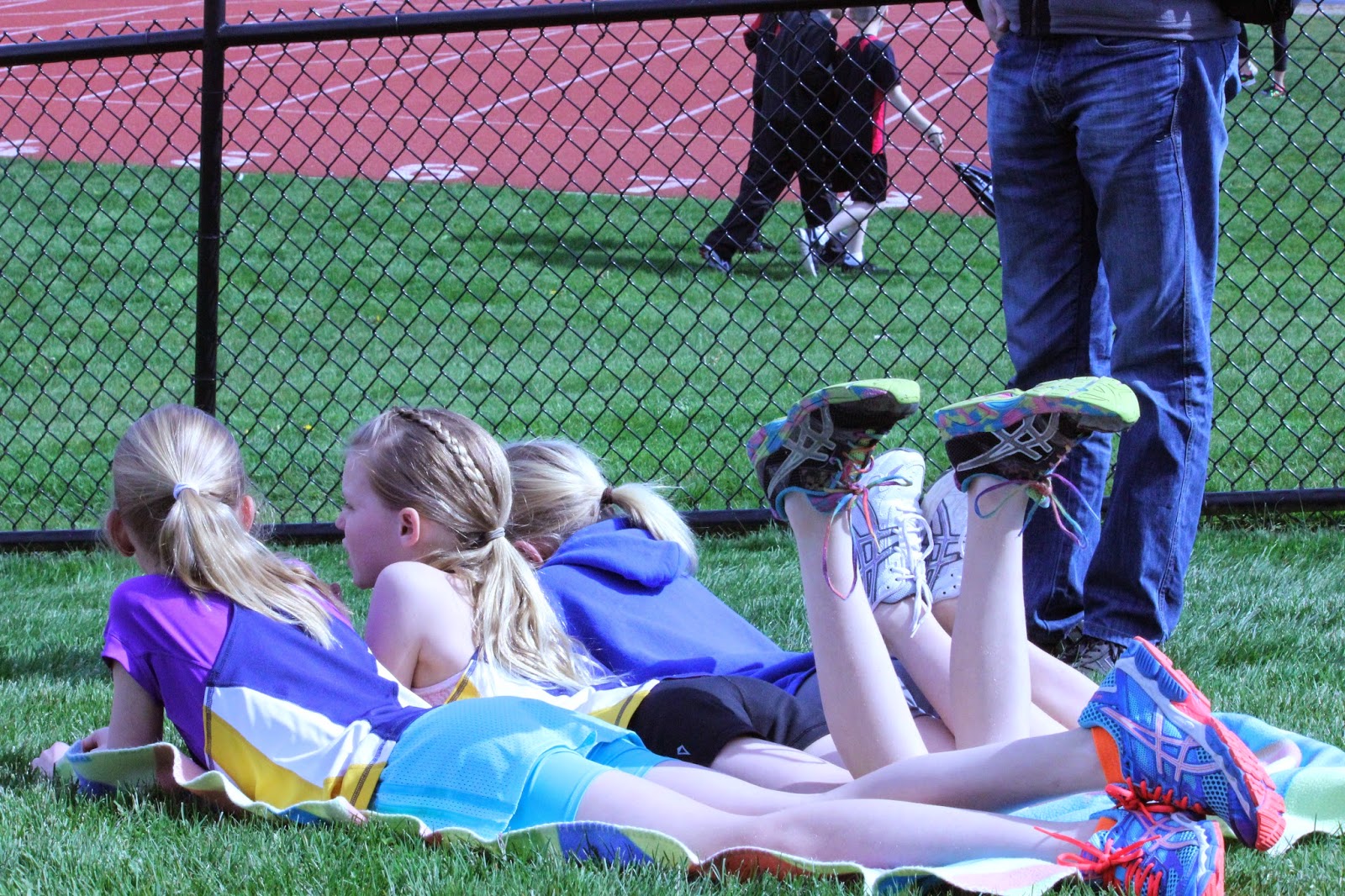 Finny's first event was the 60m hurdles. She isn't a super confident sprinter, but she has the long legs and spring required for getting over those hurdles. Consequently, she does pretty well compared to some of her shorter legged and more gravity prone competitors. 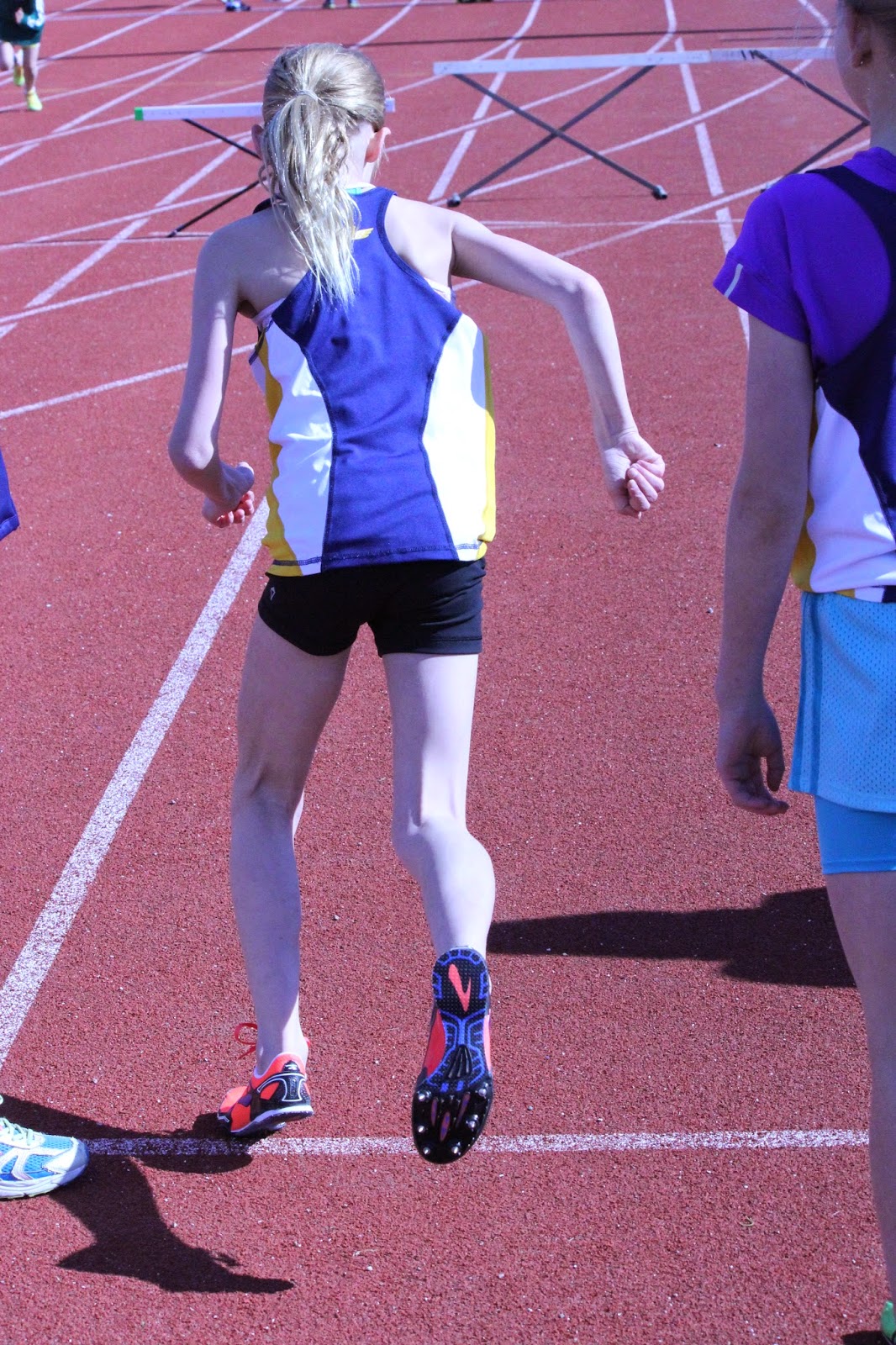 She gets her game face on...I could tell she was nervous, so it was good to get her first event done. Her time was 13.33, second in her heat and lucky 13th out of 48 girls. Not a personal best, but a good effort. 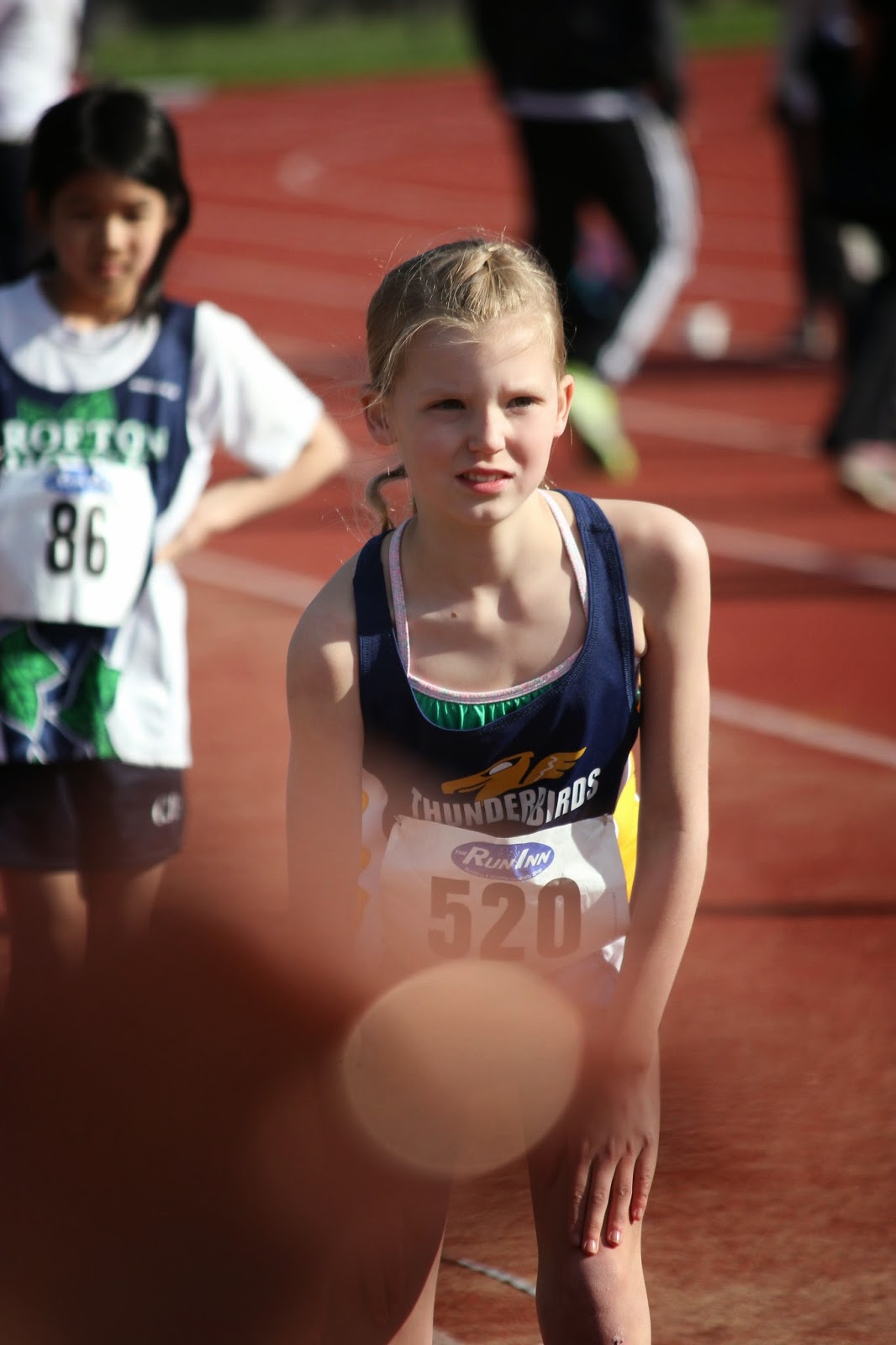 Her next event was long jump (somehow "jump" just autocorrected to "hum"...that would be a funny event...long hum!). It took over two hours (!) to get through all 50 girls. It was more of an exercise in patience than athleticism. She had her best ever jump...3.07m. Good enough for 7th overall. 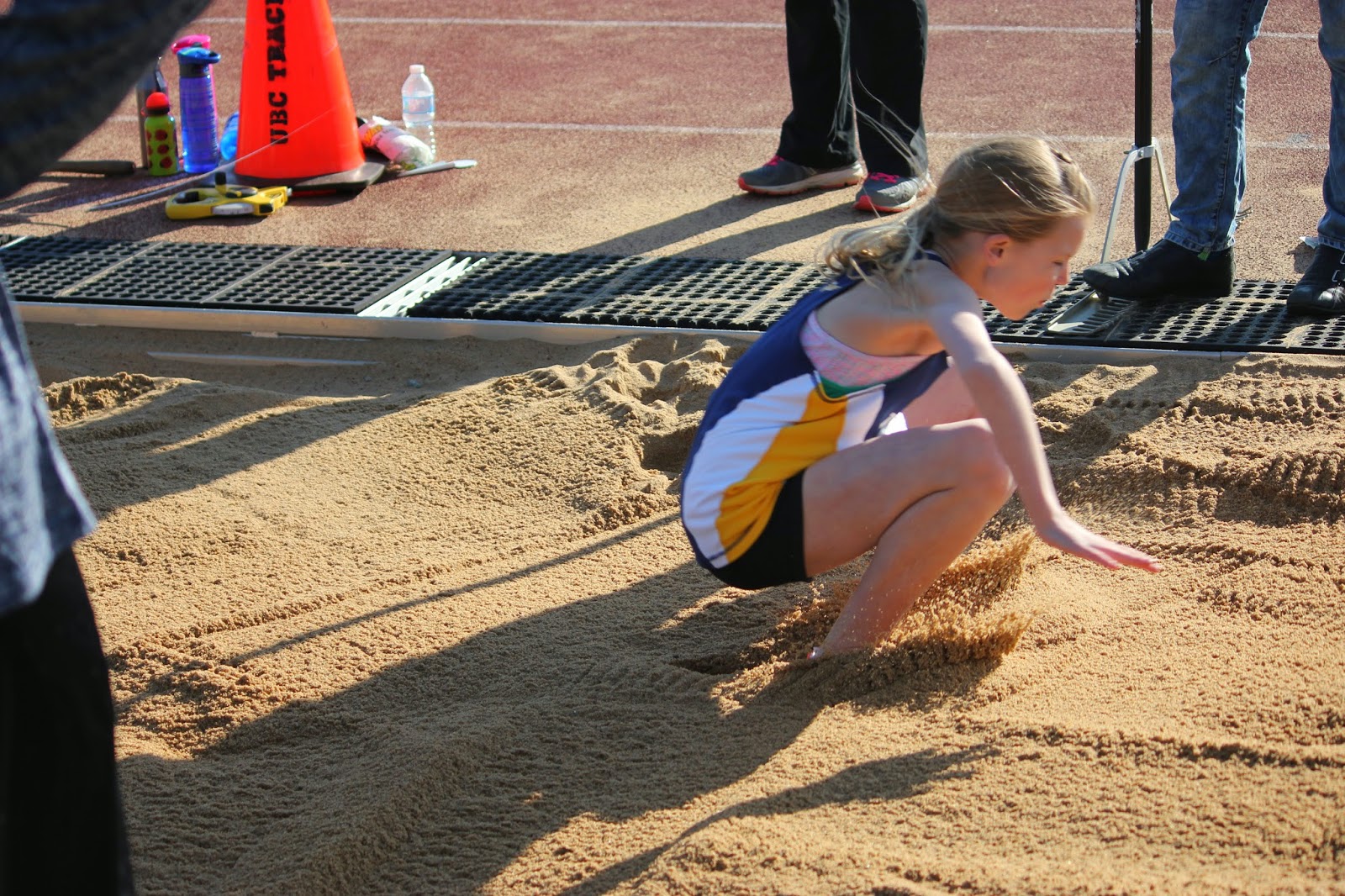 Next up, 1000m. We have discovered that if there is dirt under Finny's feet, she does better than on track. Still, a great race and she placed 6th out of 18. 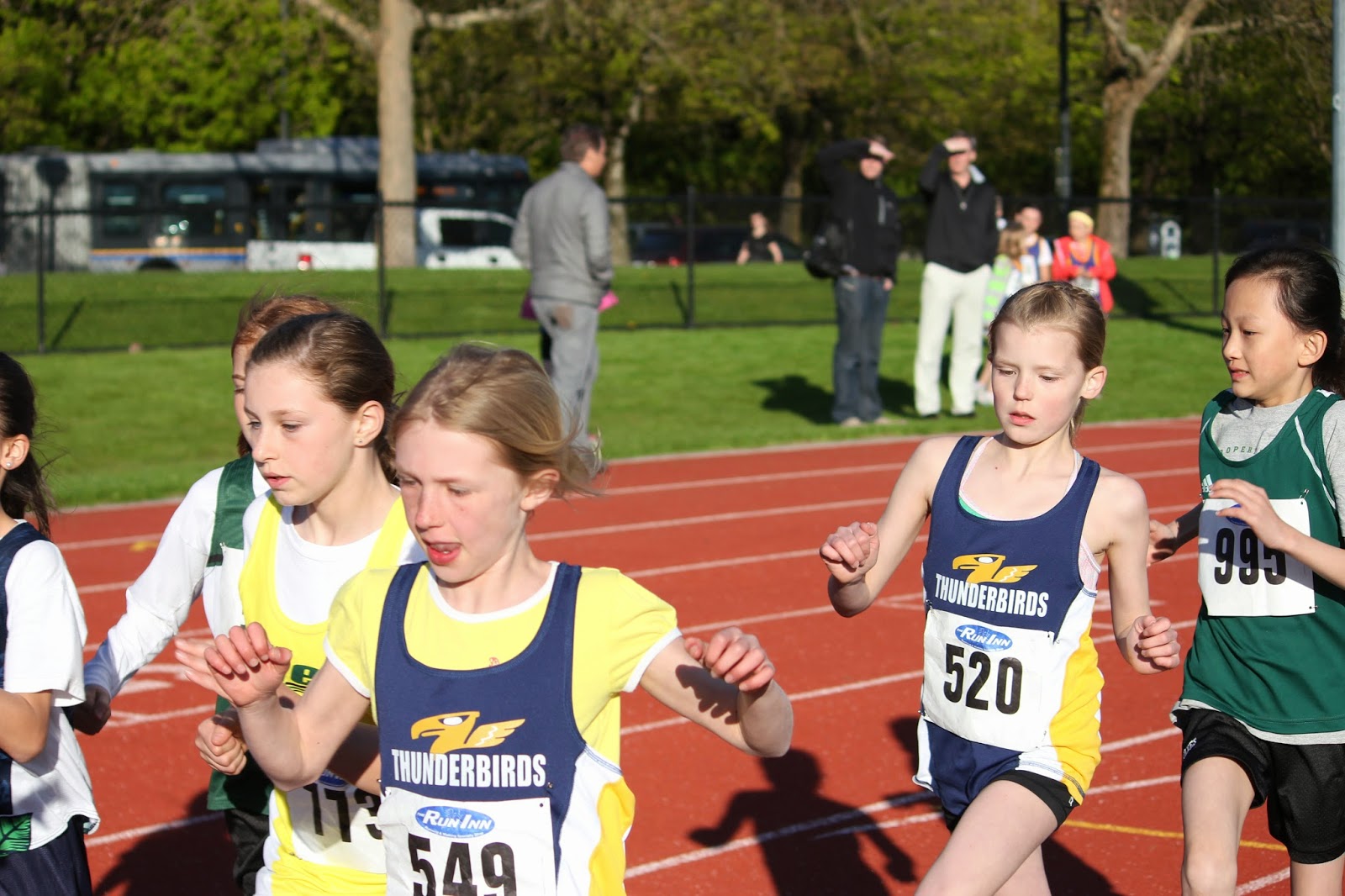 One of the greatest benefits of track, though, is the great friends Finny has made with the girls her age. They are mostly named Sophie (or a variation on Sophie). I am not kidding. 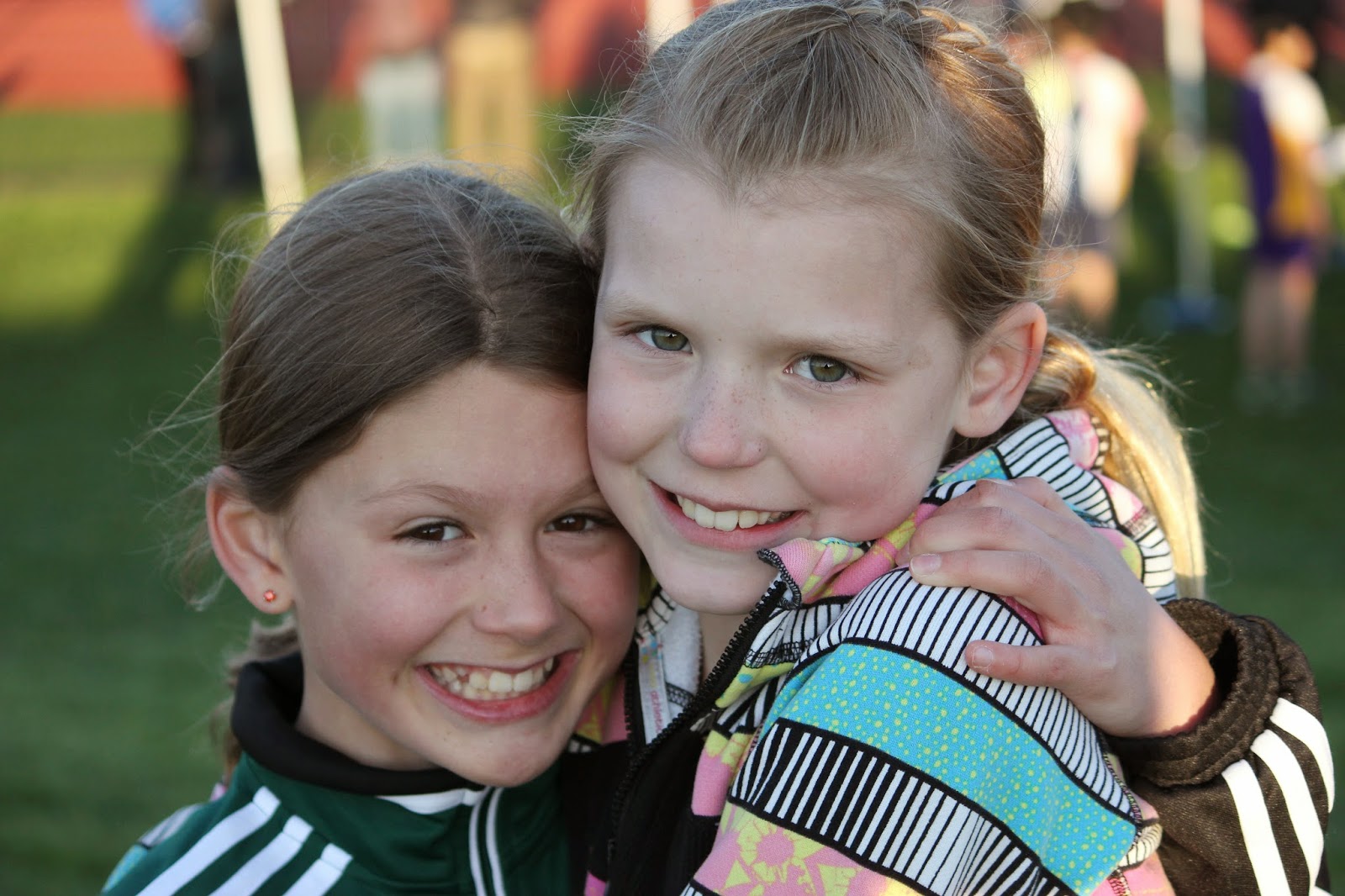 After the 4 X 100m relay (and a 3rd place finish), it was home for a rest. Up early the next morning for high jump. 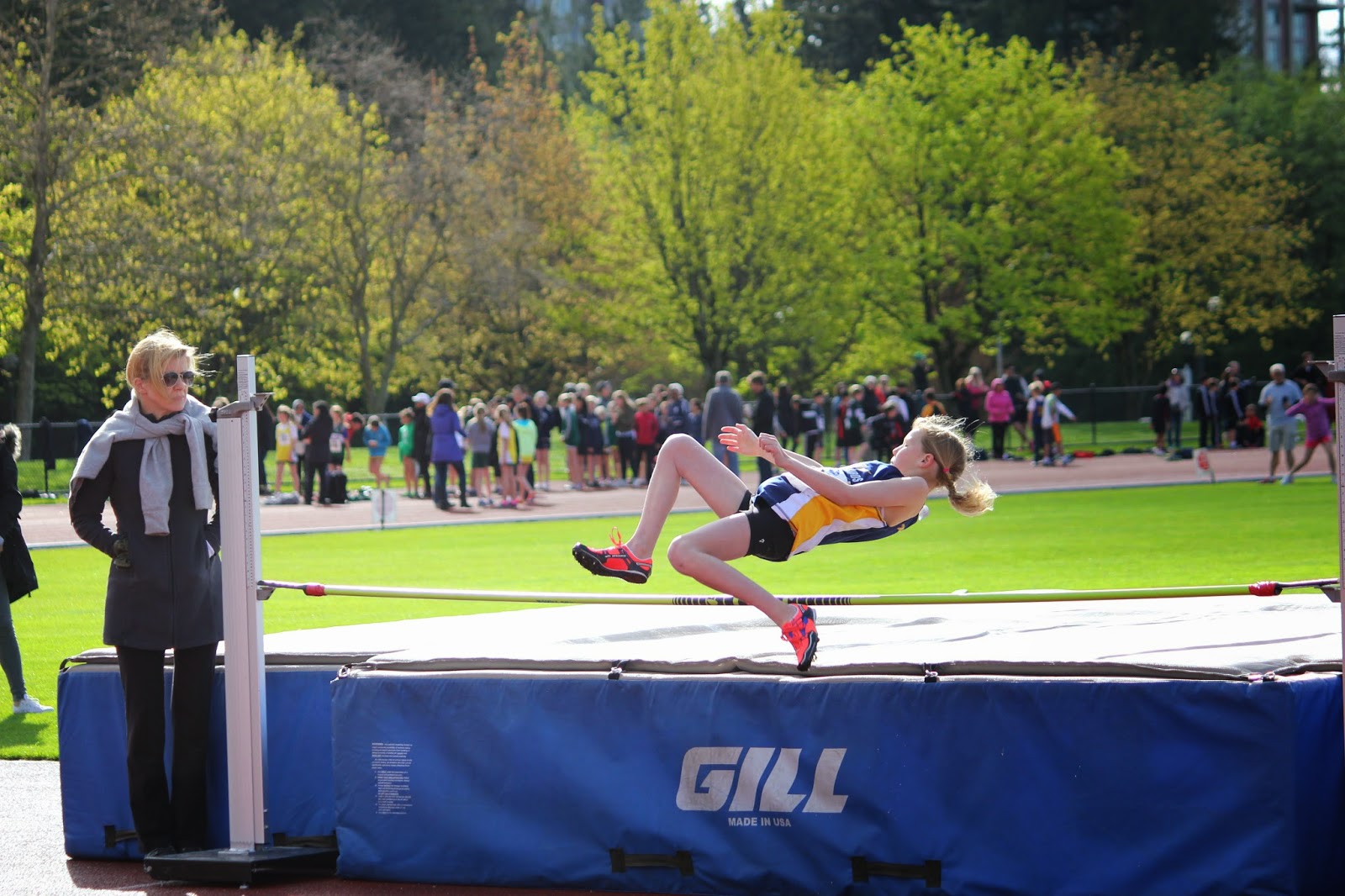 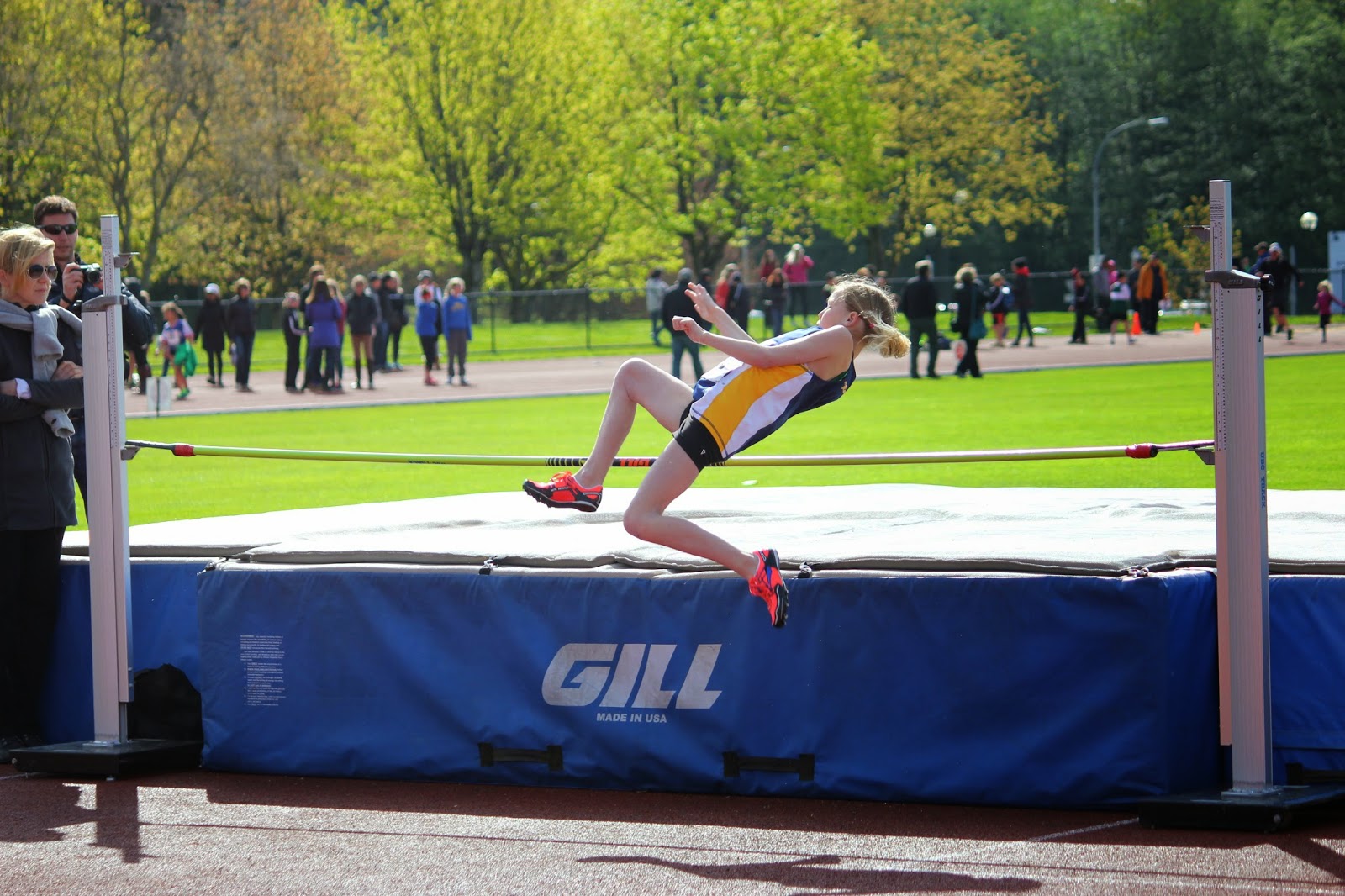 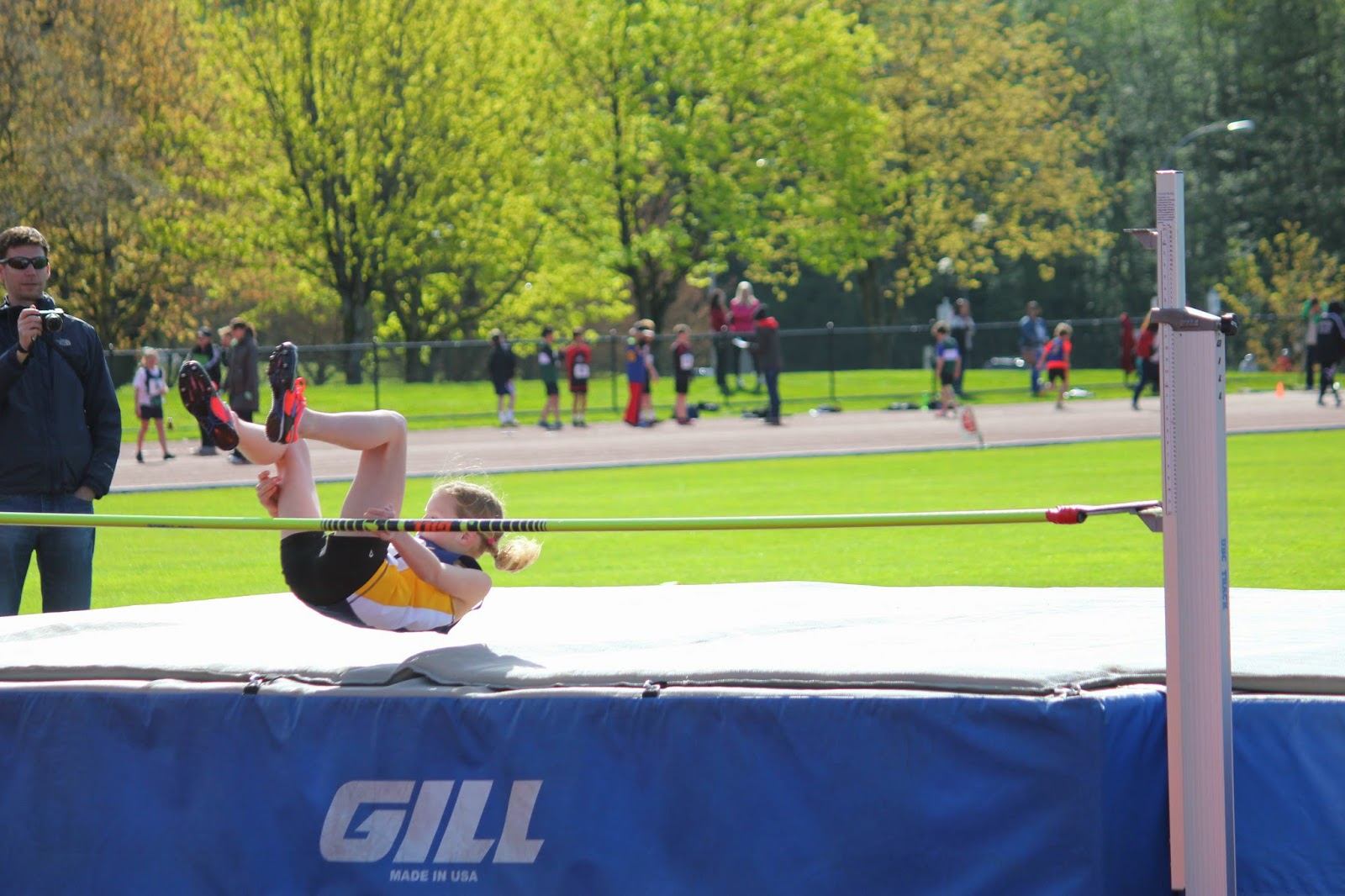 ...and shot put. She matched her personal best in high jump and threw almost a metre over her PB in shot put...throwing 5.13m for 4th place. She doesn't look the type to  excel in shot put, but she has a killer shuffle step and she channels her inner beast. We all know it's in there... 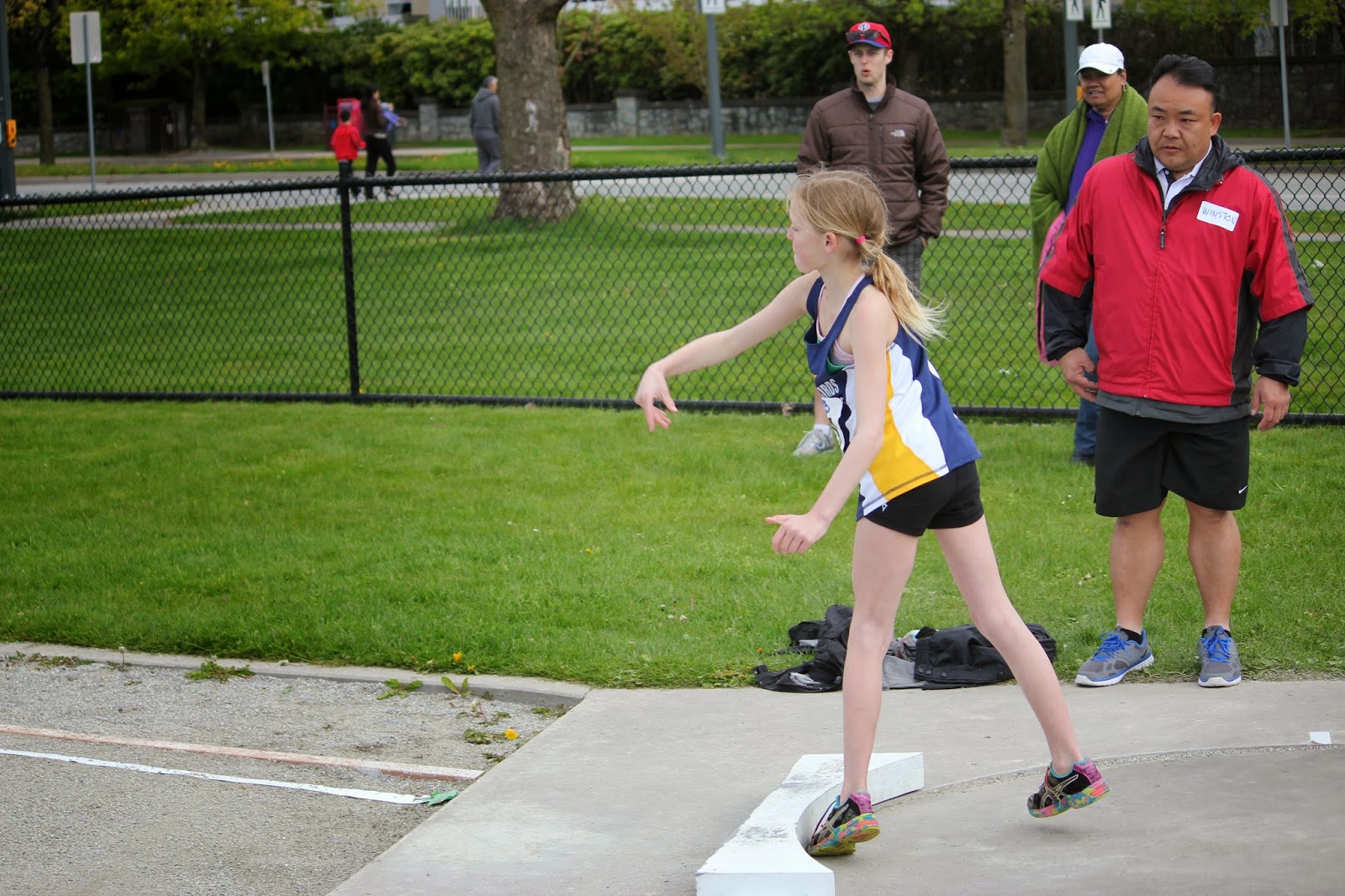 It was a great start to track season. Not only do I really enjoy watching Finny, I value the days I get to spend with her during the weekends she competes. We have long, uninterrupted talks. We stop for food and chat. They are our days. So, here's to a whole season still to come of boring blog posts, but wonderful weekends of Finny time.
Posted by Ericandles at 12:04 AM