24 Hours as a Single Mother of One Small Boy

Saturday afternoon Eric headed off to a 24 hours shift at work and the girls were picked up by Jane for an overnight before a Sunday of skiing.

That left one Lukey and one...me.

Lucky for us, we had a great diversion planned. We had tickets for the Canucks game, thanks to Uncie. My dad dropped us off in time to catch most of the pre-game warm up.

It was a bit of a stinker game (we lost 5-1), but there's no one I would rather watch a hockey game with than Lukey. He knows EVERYTHING, but he also doesn't mind my fairly stupid observations. We chatter away, sing to all the songs that come on and cheer our heads off.


After the game, it was clear and bright out. We had some energy left to spare, so we walked all the way home from Rogers Arena. I figure we're pretty lucky to be able to walk home from a hockey game, so why not?

When we got home, I made Lukey a smoothie and made myself a margarita. Yeah, that's right. I also made him a sandwich AND a hamburger. It was a midnight party, actually. 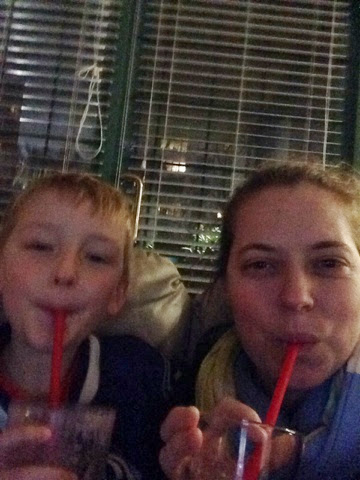 Needless to say, we slept in the next morning...but then it was up to watch the Bruins against the Flyers. Because...you know, there's never enough hockey.

Oh my God, what has this kid done to me?! 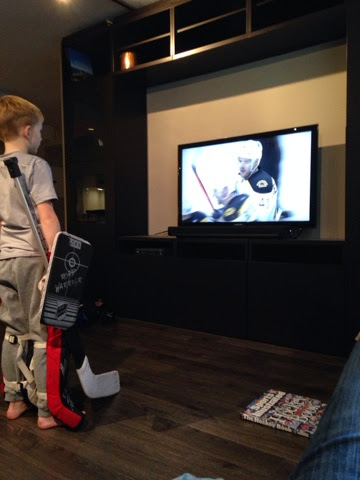 We missed Eric and our girls, but it was a pretty great stretch of time for just us. Rare, but a treat.
Posted by Ericandles at 1:00 AM