Oh blogosphere...I am not hiding from you. But wow, it sure doesn't take that much to get out of the habit of blogging every day or two. The biggest issue is feeling all the experiences I want to blog about pile up to the extent that it feels daunting to catch up. So, I will post some of our great pictures from the last couple weeks over the next few days.

Today felt like stolen sunshine in the face of all this weird hail/snow/frozen rain we have been getting. Here is a picture of our porch from three days ago. And before you ask, yes we do keep plastic vegetables and um...donuts out there year round. 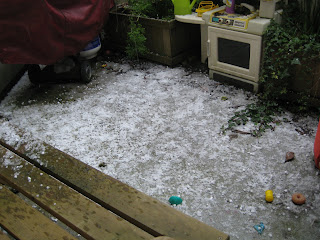 In fact, nice weather today was such a treat that I got a stern lecture from Molly this afternoon when I dragged the kids inside for five minutes to change Lukey's diaper. She admonished me for "wasting the sunshine by hanging out inside". Right. Because I just love diapers full of poop sooooo much more than sunshine. My bad.

Molly was invited today to her friend Della's birthday party. Which brought us round to yet another awkward conversation with Finny as to why she is seldom invited to the birthday parties of kids she considers her friends. She and Molly are close enough in age and good enough friends with each other that Finny plays with any kids that Molly hangs out with. But...reality is...Finny is three. Not five. And when it comes to invitations to sixth birthday parties, no one thinks of Molly's three year old sister. Except Della. She went home after spending yesterday afternoon at our place and asked her mom if Finny could be invited for today. I went to drop Molly off at the party this afternoon after having spent a couple of days hyping Finny on all the things we would do while Molly was at the party, but when we got there Finny was asked to stay. She was over-the-moon thrilled.

Tonight, we started reading Little House on the Prairie. Finny is a bit young for it, as evidenced by her falling asleep in the middle of chapter one. Molly was eating it up though. The best part was her horror when the family loses their dog Jack when they ford the Missouri River. When Laura spots some glowing green eyes beside their camp a few days later, she thinks it is a wolf. Pa goes to investigate and a terrified Molly was urging, "just shoot it...shoot it!" When she realized the glowing green eyes were attached to an exhausted Jack, she was truly shocked. It was a moment that warmed my book loving heart.

Another momentous occasion last week was Eric finishing up his official training period out in Delta. This week, he starts his regular shift. That's right. Regular. Now there is a word we haven't heard much of around here. For a glimpse of Eric in uniform, feast your eyes on this: 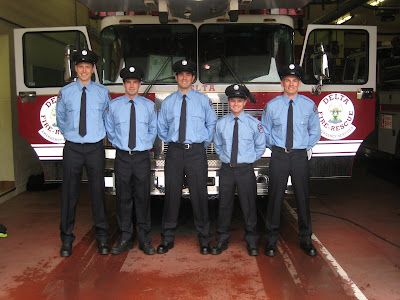