The good, the bad and the crunched 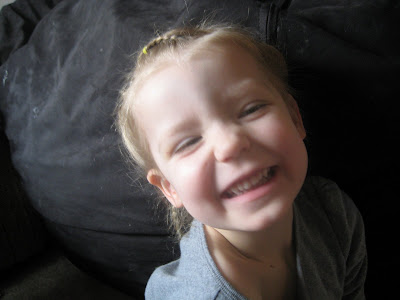 I will start with the good, because that's just the kind of chick I am.

Sometimes, just for fun, I play a stream of consciousness word association game with Finny. I don't know why it is always with Finny, but I guess it is just kind of our thing together. I say something and then she says the first thing that comes to her mind. It has filled hours of car trips and waiting room time. This little word play often yields tasty tidbits and insights into Finny's Mind (this is capitalized because I sometimes think that Finny's Mind is an entity unto itself...). This exchange is an example of my pleasure in the exercise:

ME: Finny, what is the hardest thing you can think of?

ME: What about the easiest?

Now, if that doesn't make your Grinch heart grow four sizes, nothing will.

Speaking of Grinch hearts, now I will turn your attention to the bad and the crunched. The bad is the insanely hammered guy who plowed into our van in the middle of the night. The crunched is the van. I was in and out of sleep when I heard an accident outside our window. I woke Eric up and he bolted out of bed in time to see that a 1962 Ford Fairlane had taken the front left corner off our car. He then proceeded to drive away. In a swerving, speeding, inebriated way. Eric called 911 and was more or less told that it was a really busy night but they would try to keep an eye out for the guy. Right.

Luckily, one policeman's diligence did result in the apprehension of the perp (ha, I love police-talk). Good thing too, because otherwise we would have been on the hook for the $800 deductible on the car. It looks like he will be charged with leaving the scene of an accident and drunk driving. Apparently his wife was in the car too...

But hey, let's focus on the good. Because even though going to ICBC and filling out forms is hard...hugging is easy. Good to keep it all in perspective.
Posted by Ericandles at 12:08 PM

I just wanted to say thank-you for this post. We have just found out this weekend that the road to K's career is going to be longer and harder than we had hoped and when the weight feel so great it is good to be reminded that some of the most wonderful things in life are easy!

Glad the caught the guy!