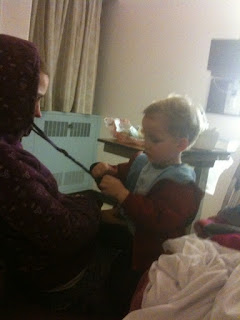 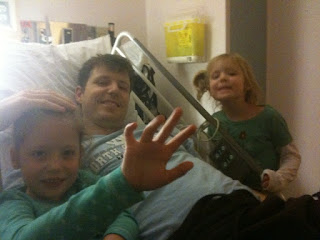 Les brought the kids out to visit again today and we had a pizza
dinner together. It is starting to feel like I have been here at the
hospital and in a bed a long time, so it was nice to have a change of
pace. Les has been great about coming out to visit but it has been a
really tough week for her do this and also get the finishing touches
on her latest chapter due and take care of all the kids needs. She
handles it incredibly well but I know it isn't easy and that it must
be stressing her.

My only job has been to take it easy in bed and protect my operated
leg while I get healthy. As simple as it sounds, I actually haven't
done a great job of it. After my blood transfusion on Wednesday and
subsequent hemoglobin test that showed rising levels on Thursday, I
was given the go ahead to start supervised physiotherapy. On Friday
morning I managed to walk pretty well with crutches and to demonstrate
most of the home exercises necessary to be discharged. The one last
check was to have someone demonstrate the proper method for getting in
and out of the tub. Unfortunately that someone happened to be the one
staff member we met who wasn't great....okay to be honest.....was one
of the least competent people either Les or I have ever come across
anywhere during our lives. (Get Les to tell you the stories) However,
I hardly figured this occupational therapist's incompetence was going
to be an issue during a two minute demonstration.

However as this person, let's call her Pat (not her real name and not
nearly as "on the ball" as SNL's Pat...but let's go with it)
demonstrated how to sit on a bench and pivot, I started to feel light
headed. I told her I wasn't feeling too well and needed to rest. She
just kept talking, perhaps not quite catching on to what I was saying.
Because there was no where for me to sit, other than Pat's bench which
I would have needed help down to anyways, I leaned back against the
counter of the bathroom sink. As I started to lose even more colour
and feel more light headed, I told Pat I needed to sit down. She then
left the room and walked down to physiotherapy. She came back a
minute later and told me that someone was coming with a wheelchair.
At this point I was fighting really hard to stay awake (a little bit
like you can get when driving on a long trip and have to really fight
to keep your eyes open), still winning the battle but knowing I
wouldn't be for long. When I told Pat I wasn't going to make it, I
figured she would either grab the kitchen chair six feet away or help
me to the ground. Instead she just left. The next thing I remember was
waking up, on my back under the counter with a big lump on the back of
my head and surrounded by a group of concerned hospital workers.

I have to admit to being a little bit panicked. Like I said, my only
real job is to protect the leg while it heals and here I had fallen
uncontrolled from my feet to the floor. The welt on my head let me
know it wasn't a soft fall. My hip was still so swollen and the leg
filled with so much fluid it was impossible to tell if I had directly
fallen on the right hip. I was also a pissed because, while I had
folded like a cheap suit, I knew that if anybody else had been there
other than Pat, this would not have happened.

The rest of the day was spent getting more x-rays, being confined to my
bed and getting another couple of units of blood. For some reason my
hemoglobin had dropped to 69, which when combined with standing still
for a five minute Pat tub transfer demonstration, is a rather
intolerable combination.

It appears like I didn't do any further damage to the new hip and
there won't be any consequences beyond having to extend my stay here a
couple of extra days. Overall the hospital has been excellent, so I
guess I just have to think of it as an extended vacation really. I
just feel a bit bad for Lester, who, instead of going on vacation, has
turned into a regular White Rock commuter.

Hope you're feeling better Eric - AND I hope Pat stays away... eek, scary. Hi to all! xo

Anonymous said...
This comment has been removed by a blog administrator.
9:39 AM