The kids were so excited by the beach. We decided our second day after Orlando would be a tour of all the beaches that caught our attention on our drive between Hutchinson Island and Fort Lauderdale.

First stop was a random pull over on the side of the road, still on Hutchinson.

There were no people in sight. Just gorgeous peaceful beach...and three screaming kids. 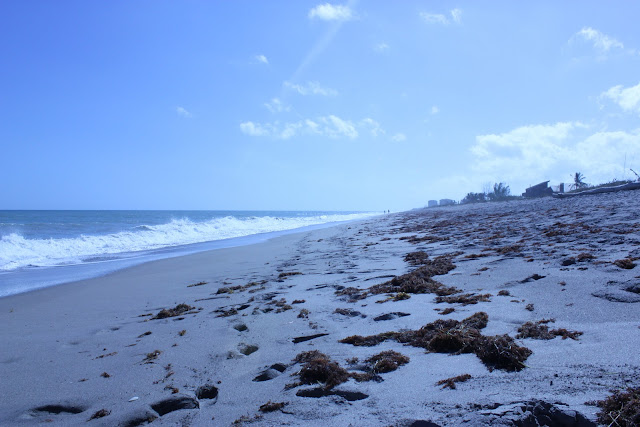 I will apologize again for the lack of variety here. There are a lot of beach pictures. The kids don't even have different bathing suits to break up the monotony of beach fun. Sorry... 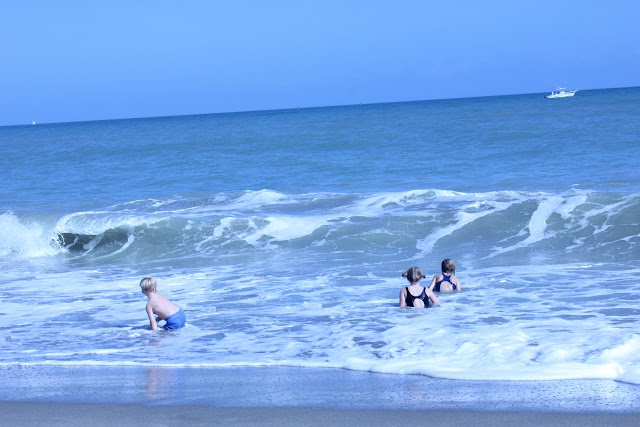 There was more throwing in the water, trying to catch a wave. 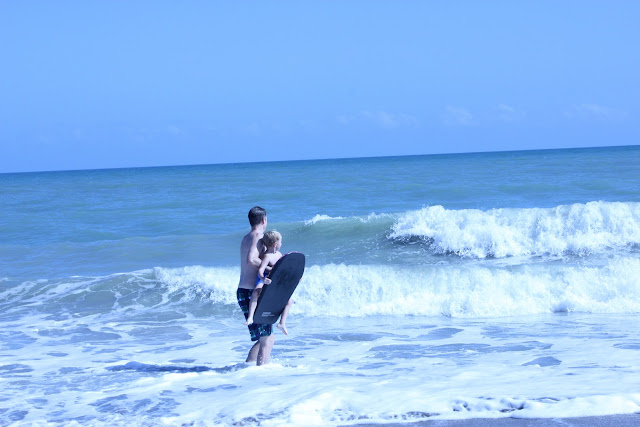 There was some excellent shell hunting. Some straight swimming and some sand play.

We jumped back in the car, kids still in swimsuits sitting on a towel in the back of the car to allow for a quick bolt to a new beach.

It didn't take long to find another tantalizing stop. Boogie board, towels, noodles and kids. We poured out of the car and into the water. I should mention that it was BOILING out. It was honestly too hot outside of the car and not in the water (at least for me...). It was that magical temperature when you come out of the water and feel no chill of any kind. 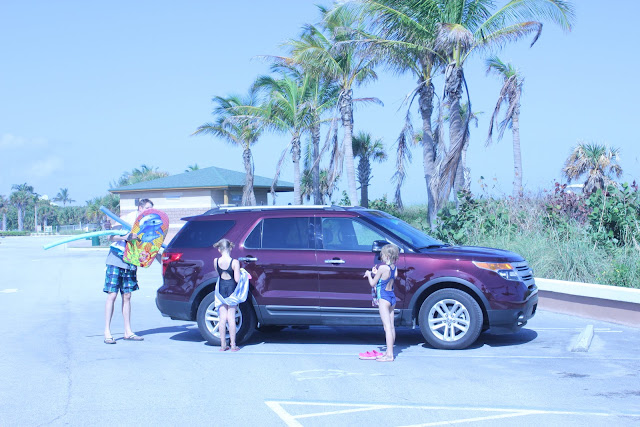 We hit Jensen beach because it was favourably reviewed in our guide books and online, but it wasn't our favourite. The beach was a little steeper and more shell-ridden.

No problem...back in the car. 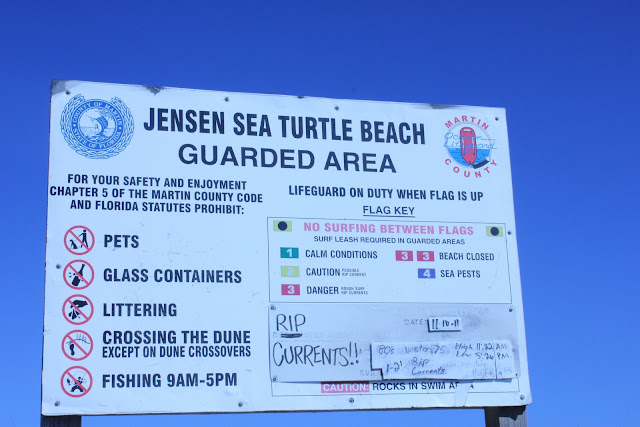 We did like the poster of the manatees, though... 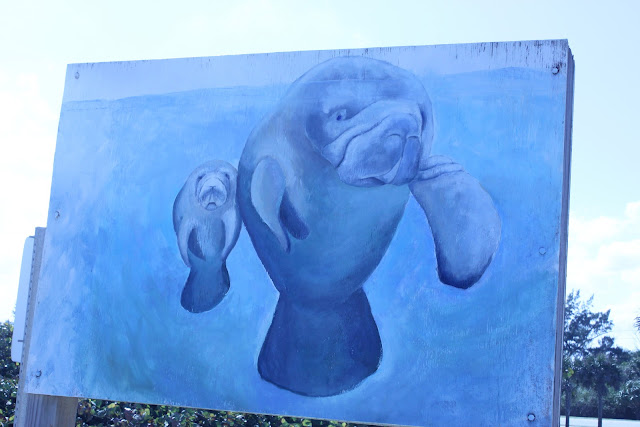 Our next stop was meant to be Bathtub reef, a really cool looking beach named for the reef that forms a shallow tide pool off the beach shore. Unfortunately, it was closed. Apparently October and November storms wash the sand out and make cliffs and unstable dunes.

We modified our plans and stopped for Subway sandwiches and another close by beach.

Once lunch was done, we had a family soccer game. 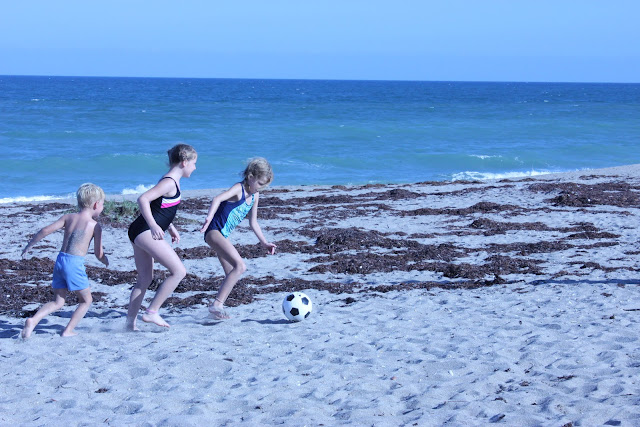 Surprisingly, Molly was the most competitive. She really wanted to win. 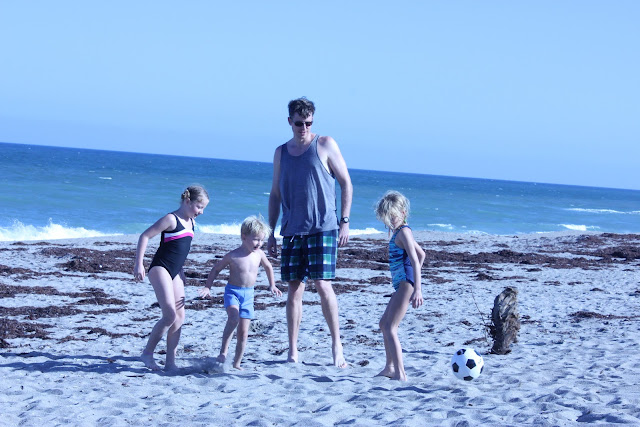 Check her out challenging Lukey. It was girls versus boys, but the fairer sex did not prevail. Next time, girlies, we'll get those brutes... 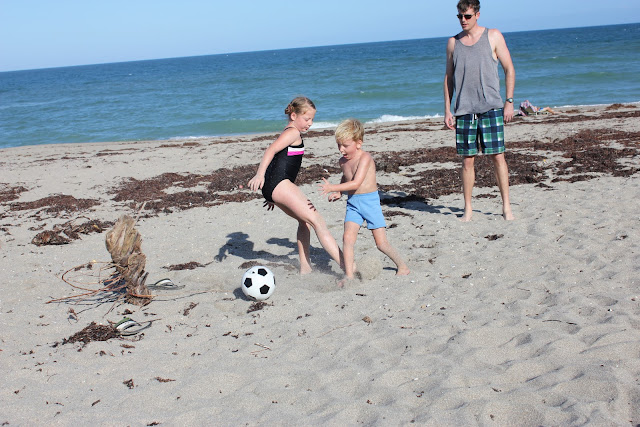 So, sweat and sand equal...this guy: 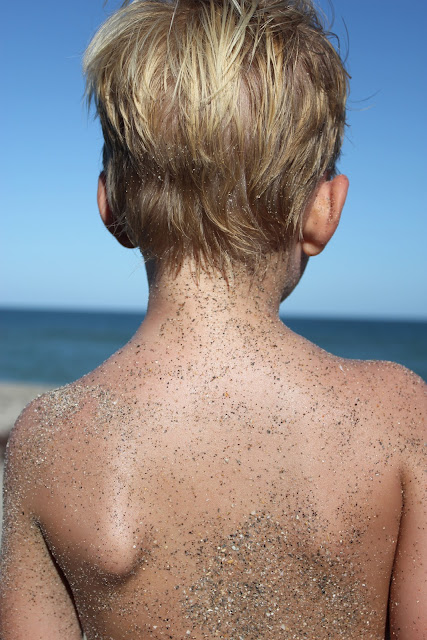 He looks so disdainful and cool beach boy in this one. I had to laugh. 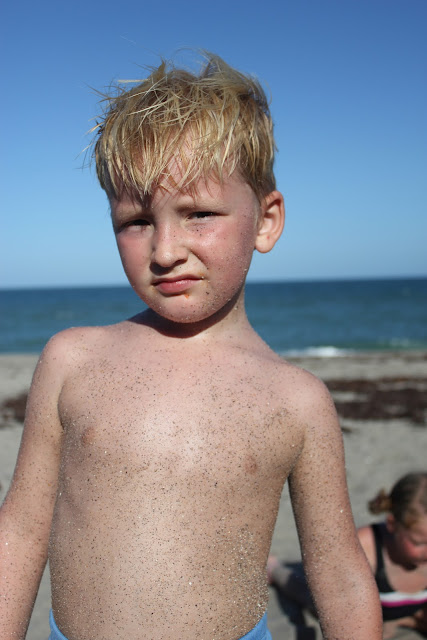 The kid was covered in sand, so we figured we may as well go whole hog and bury him in the sand. 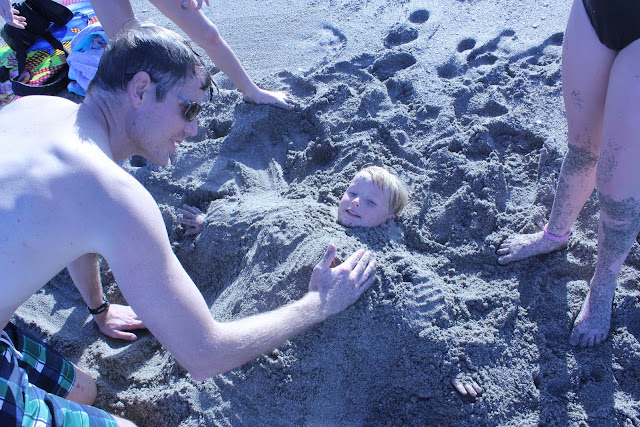 He was pleased. Until Daddy put boobies on him. 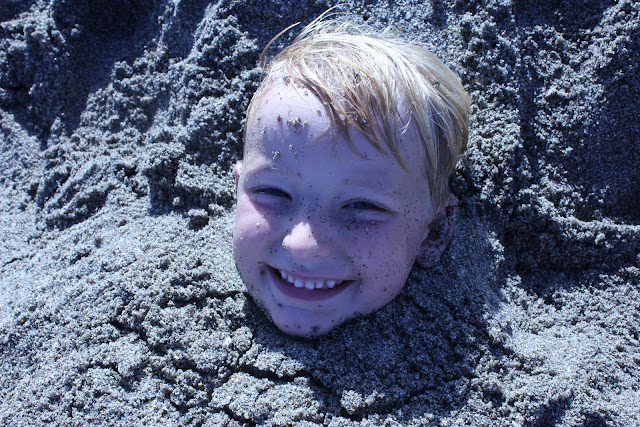 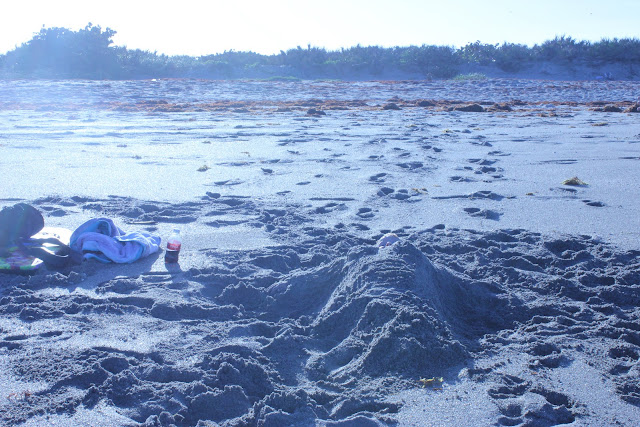 He broke loose and it turns out you CAN get sandier. 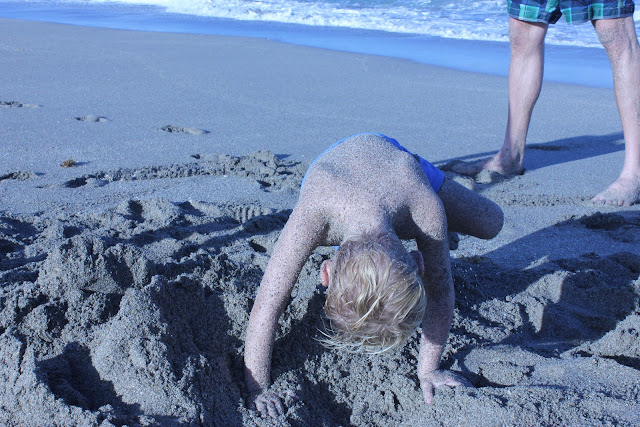 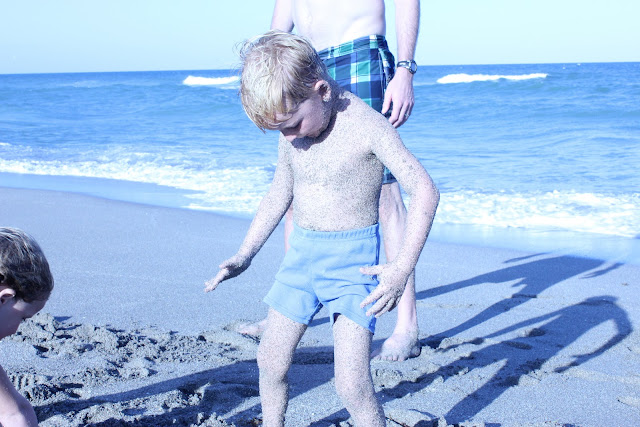 Never one to be outdone on fun, Finny needed to be buried too. 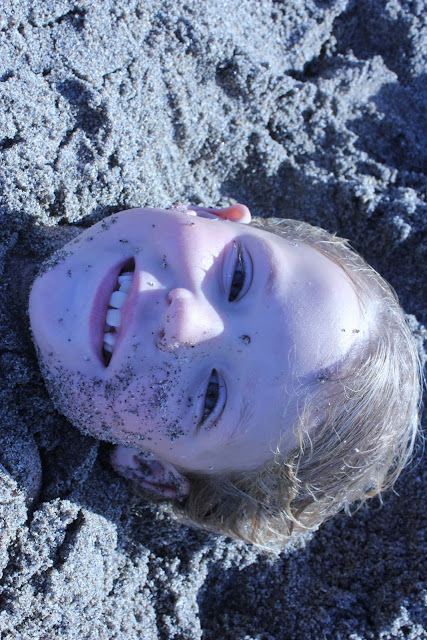 The boogie board is supposed to be a gravestone. Macabre. 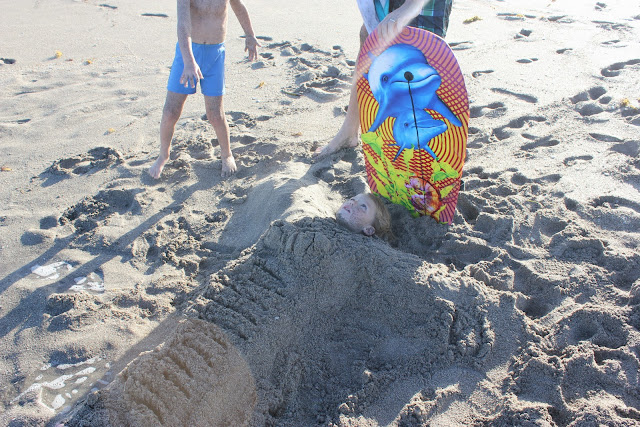 We drove through Palm Beach as it was getting dark. Described in our guide book as the wealthiest city in the U.S., we made a statement by eating two day old buns with peanut butter and jelly on their fancy beach walk. Take that, swanky Palm Beach. 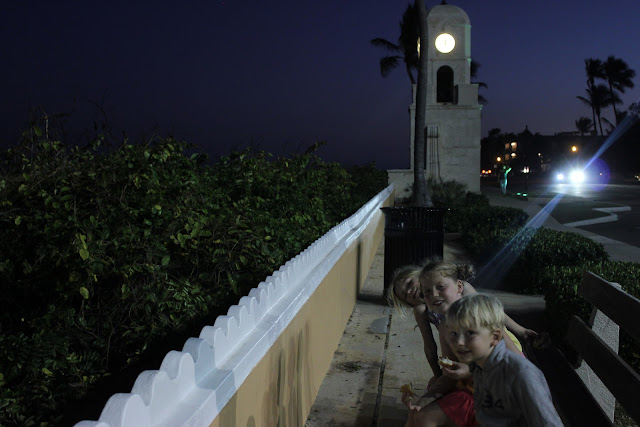 We called it a long day (and I will preserve our dignity by not describing our search for dinner that night...suffice to say there are limits to what should be done to find free kids' meals...) and checked into our lovely hotel in Fort Lauderdale. The kids had a nice swim before bed. We needed our sleep...next day we were off to Miami! 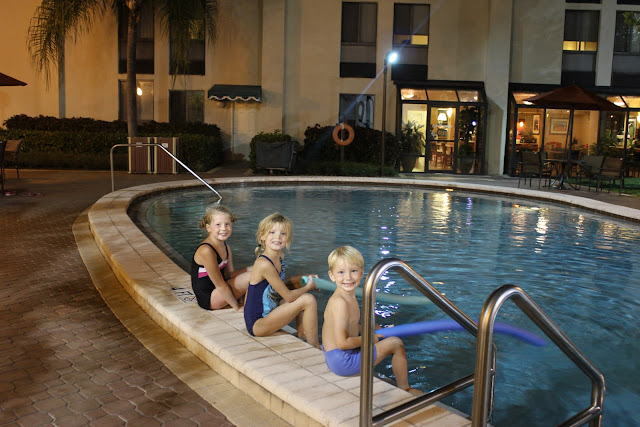