Weekend fun and a half birthday

The sunshine comes out and we start to think of summer. And nothing says summer quite like Point Roberts and the boat.

With no plans on Saturday and gorgeous weather forecast, it was time to dust off the old Albin and get out on the water. We only had time to do a little run around Lily Point to Maple Beach, but it was so nice to get out. 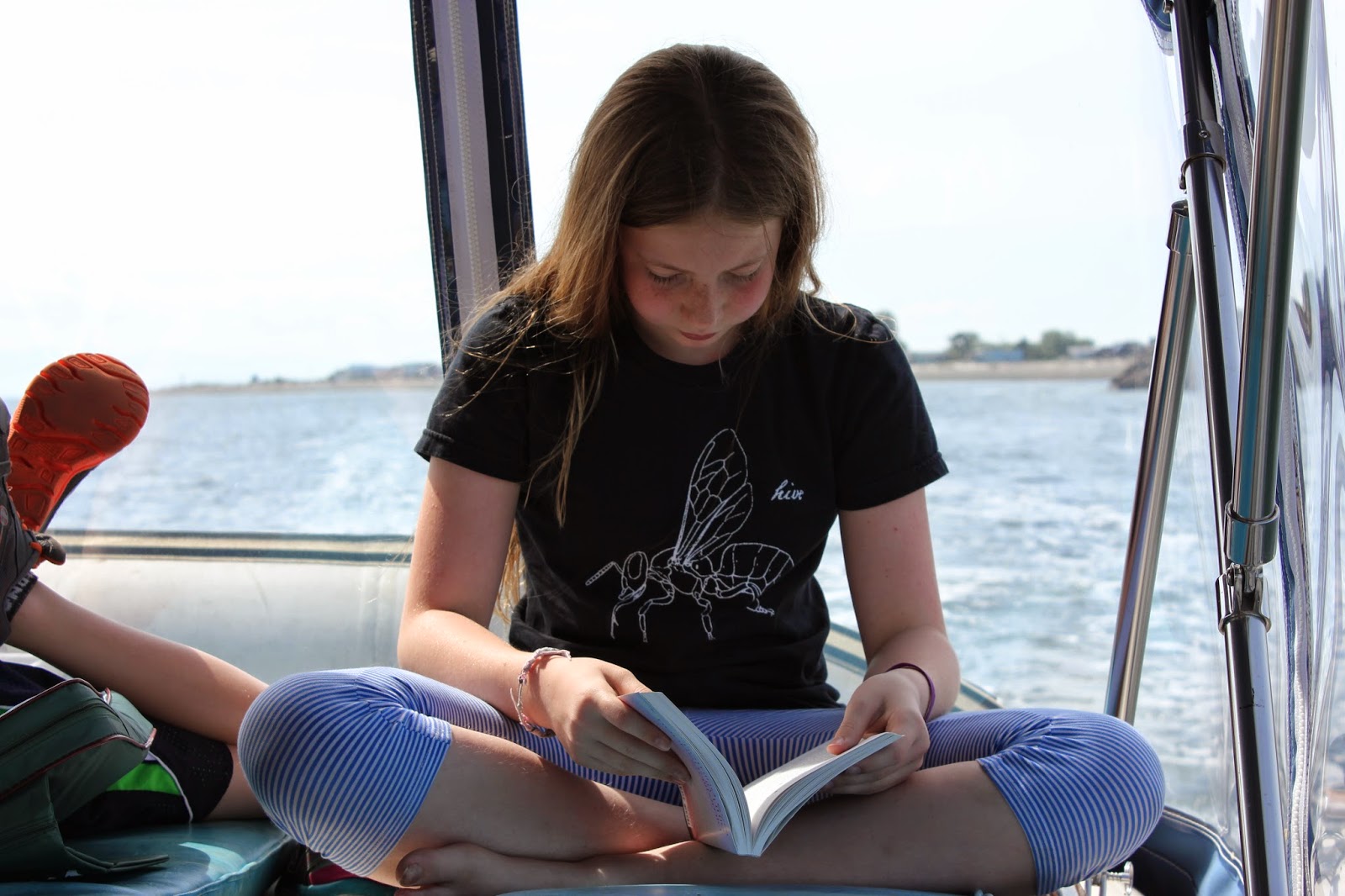 Not much makes me happier than seeing my girl buried in a book. 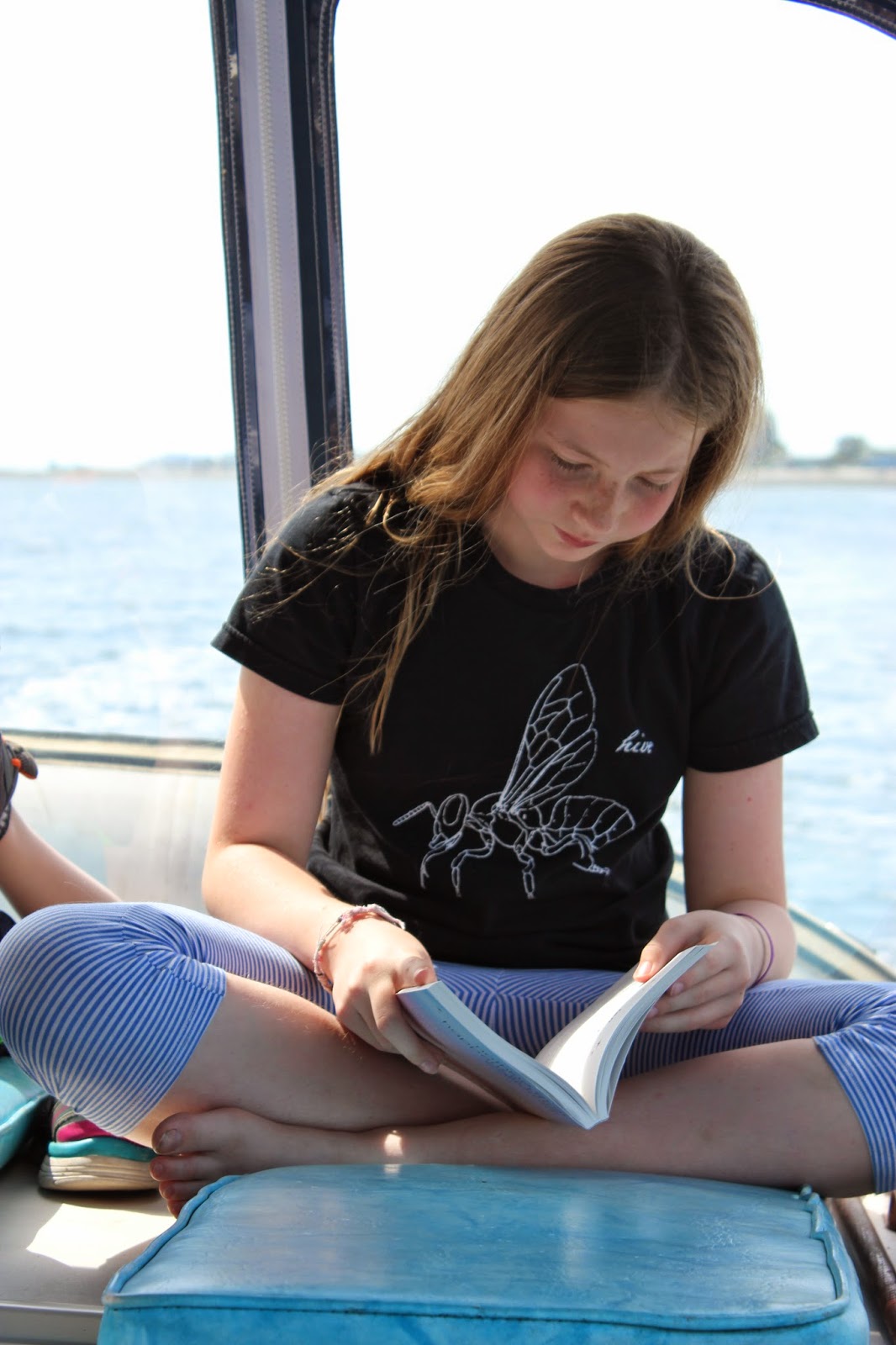 We haven't gotten Lukey into the world of books just yet. The closest we have come is this strange little Black Lagoon series that he likes, but he is still happy to hang out between his two bookworm sisters. A ring pop helps... 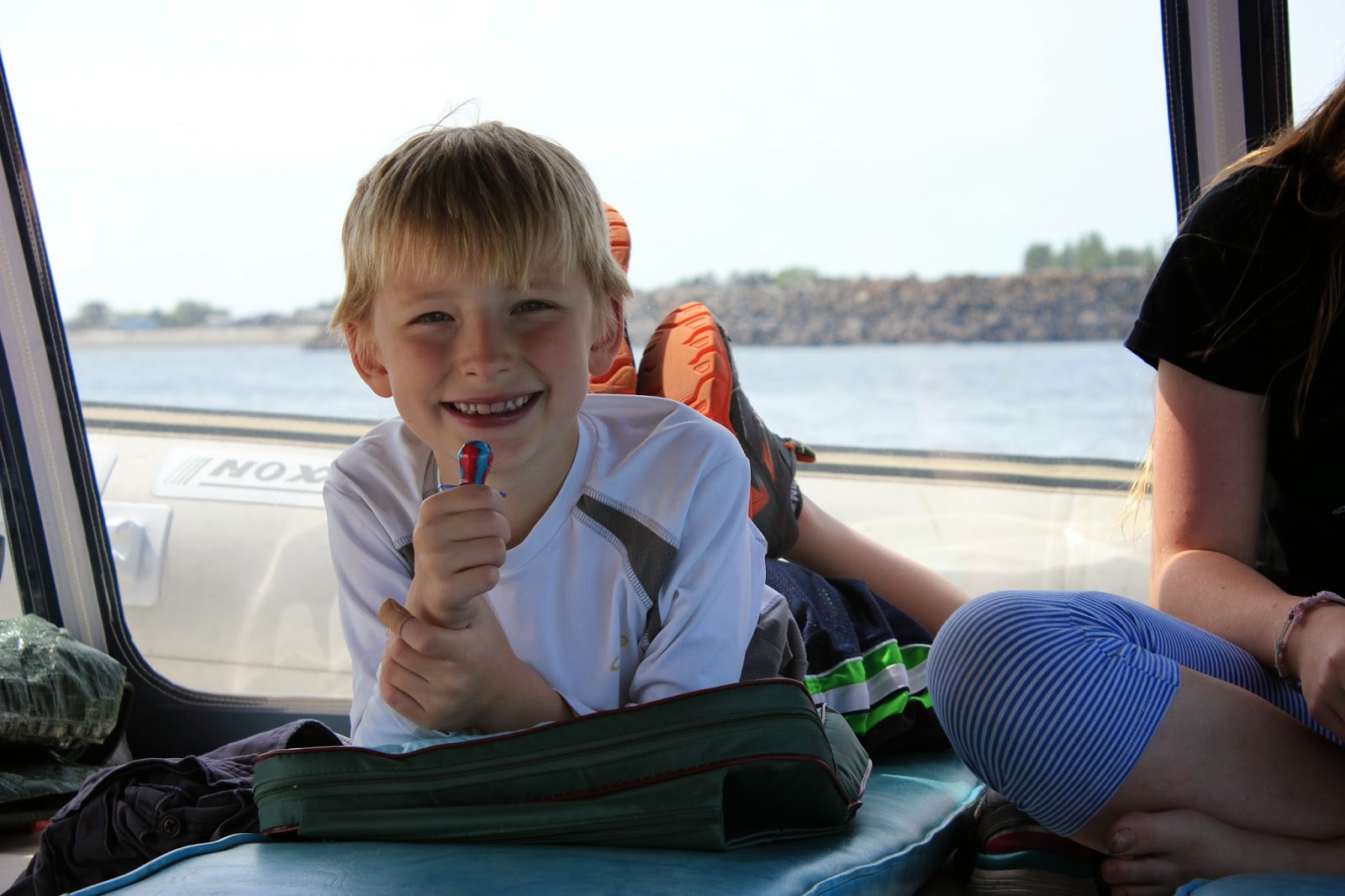 We had a really short sojourn down to the Point, since we had a few things lined up for Sunday. First and foremost was Lukey's half birthday party. December is a busy time and trying to figure out something fun indoors for a party with his friends feels daunting. Instead, this is the second year we've waited half a year and gone with a street hockey half birthday celebration instead.

Just a little bit of preparation: 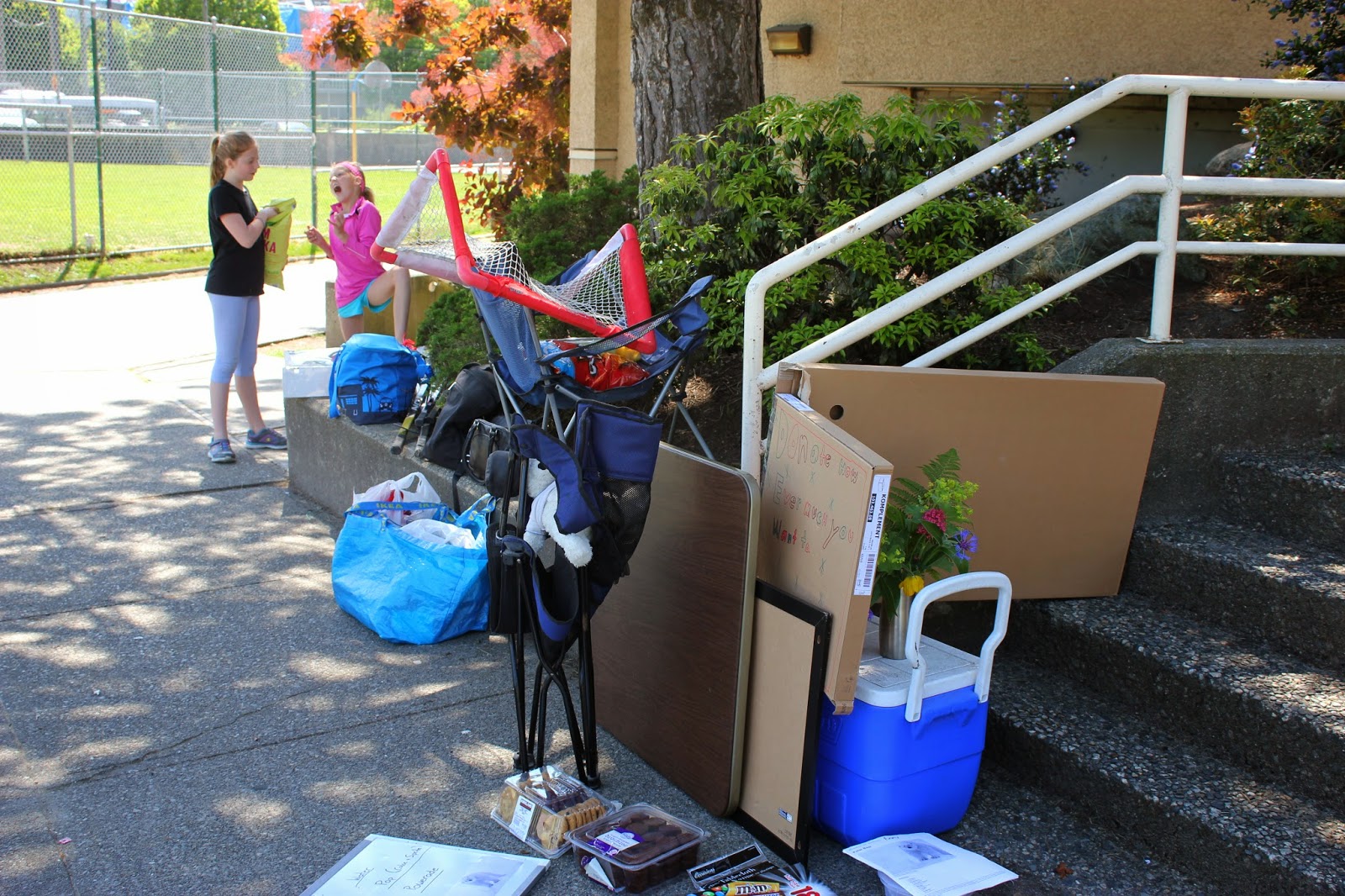 ...oh, and Finny decided to run a sale on the seawall to benefit polar bears at the same time. Because...why not? 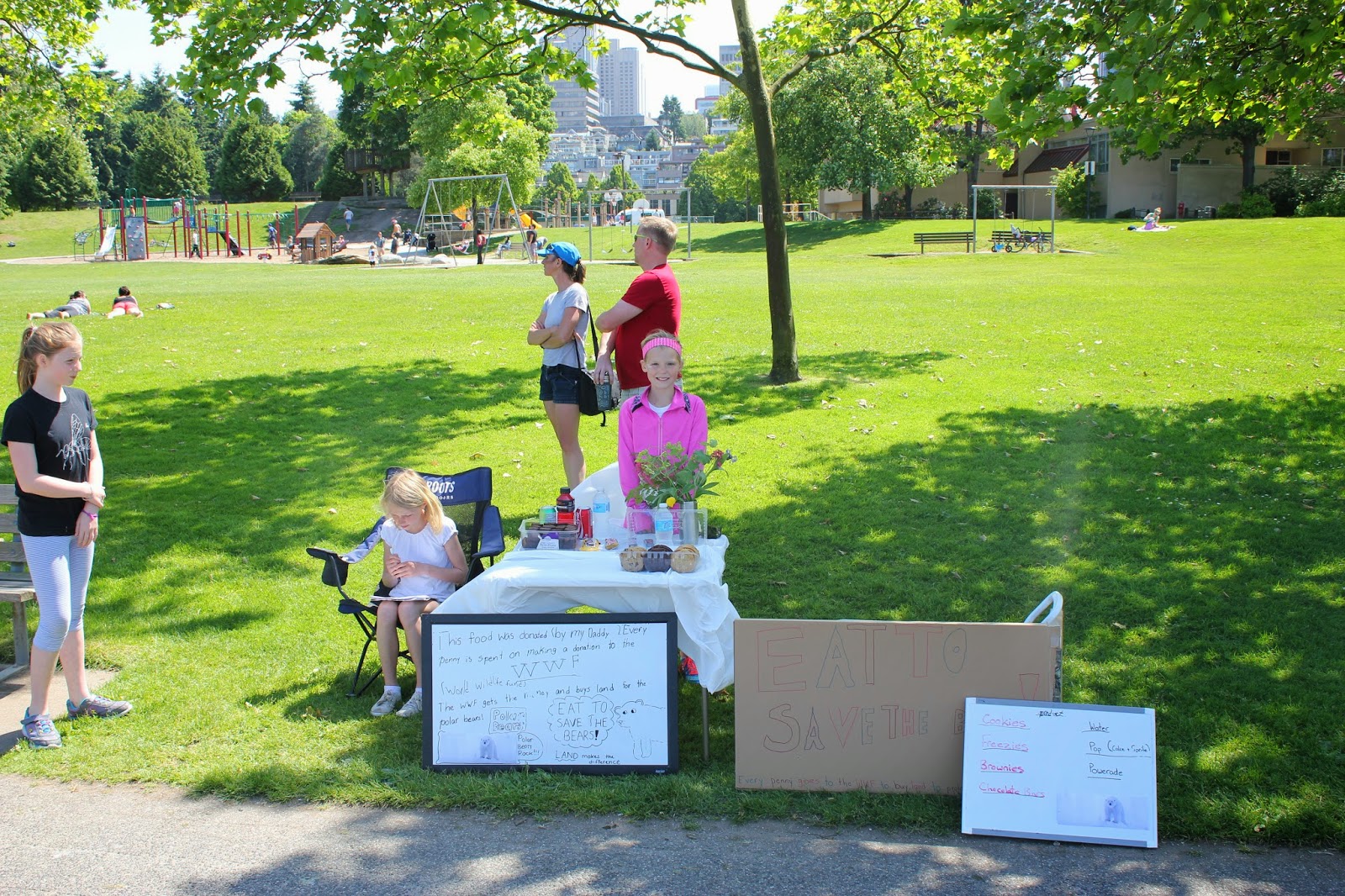 Never keen to do anything by half, she had an information sheet to provide info on the plight of the bears. We had a bunch of stuff from Costco and she was offering it up by donation, with all proceeds going to the WWF and polar bear conservation. (See the "Eat to Save the Bears" sign?)

It started off with the kids being a bit shy and tentative, but by the next time I went down to check on them, I could hear cries of "Bears are dying...!" from the swing set. They weren't going for subtlety.

I guess it worked for them. $212 later...the polar bears are grateful. 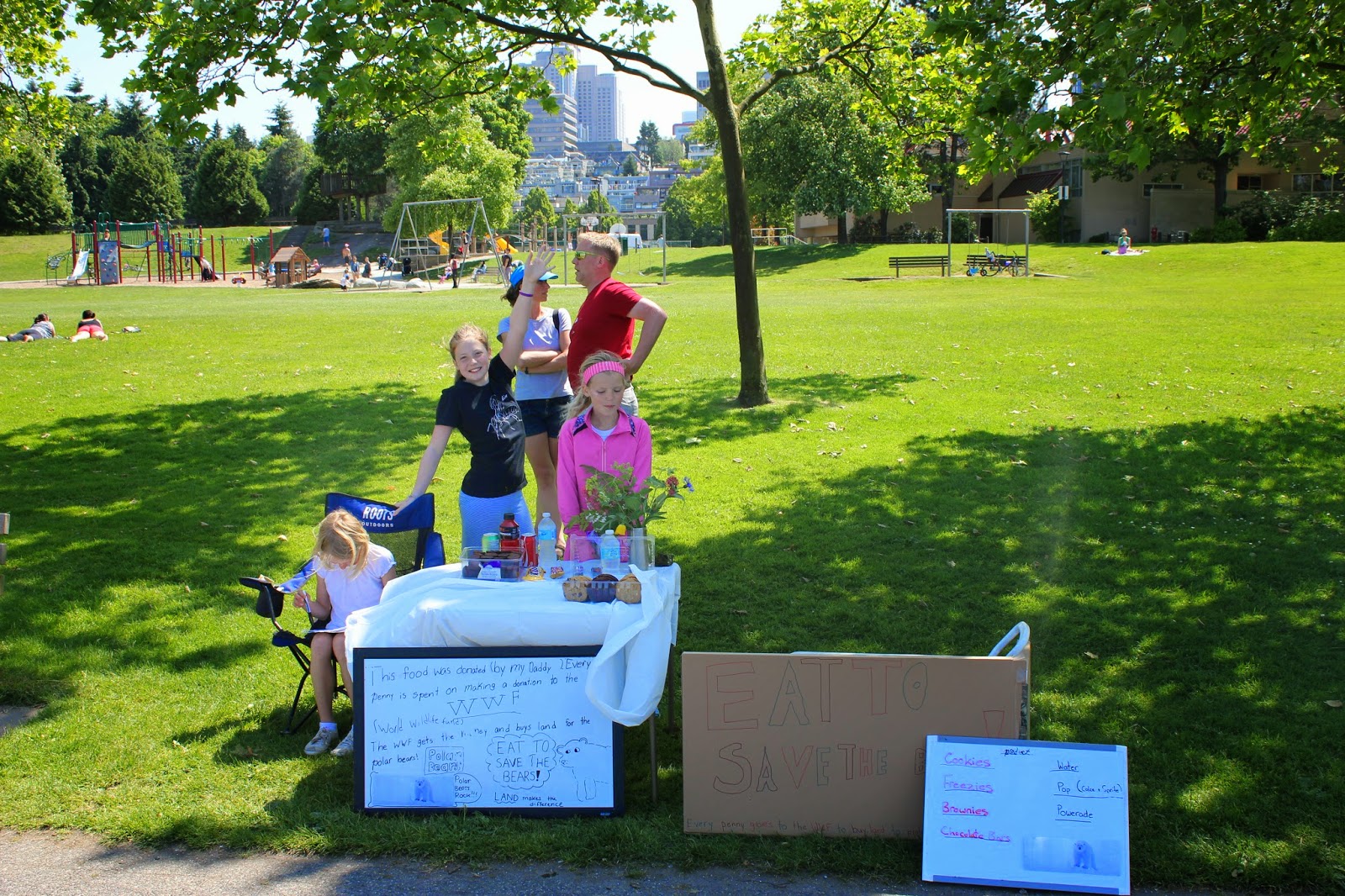 Meanwhile, up on the blacktop, the boys were deep into hockey. We had: Jeremy, Torsten, Markus, Dario, Oakland (Dario's brother), Jude, Matthew and Brett. Pidge played the whole time, too. A couple of other parents dropped in and out, but my comment at the end was "I don't know if the kids will sleep well tonight, but I know Eric will..." 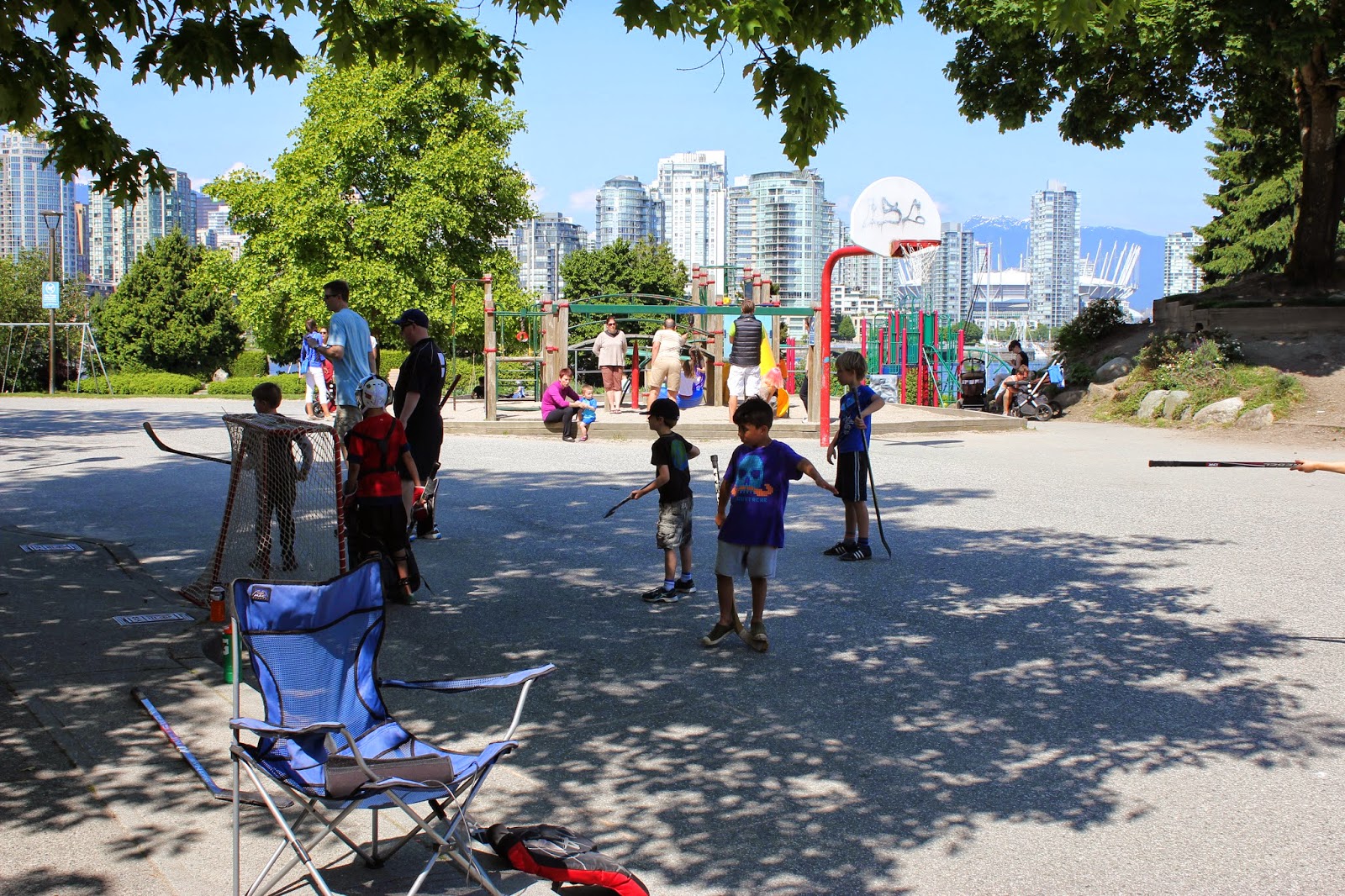 There were a few injuries along the way. A few breaks for water, Powerade, snacks and cake. But mostly, it was a lot of hockey. Like four hours worth. 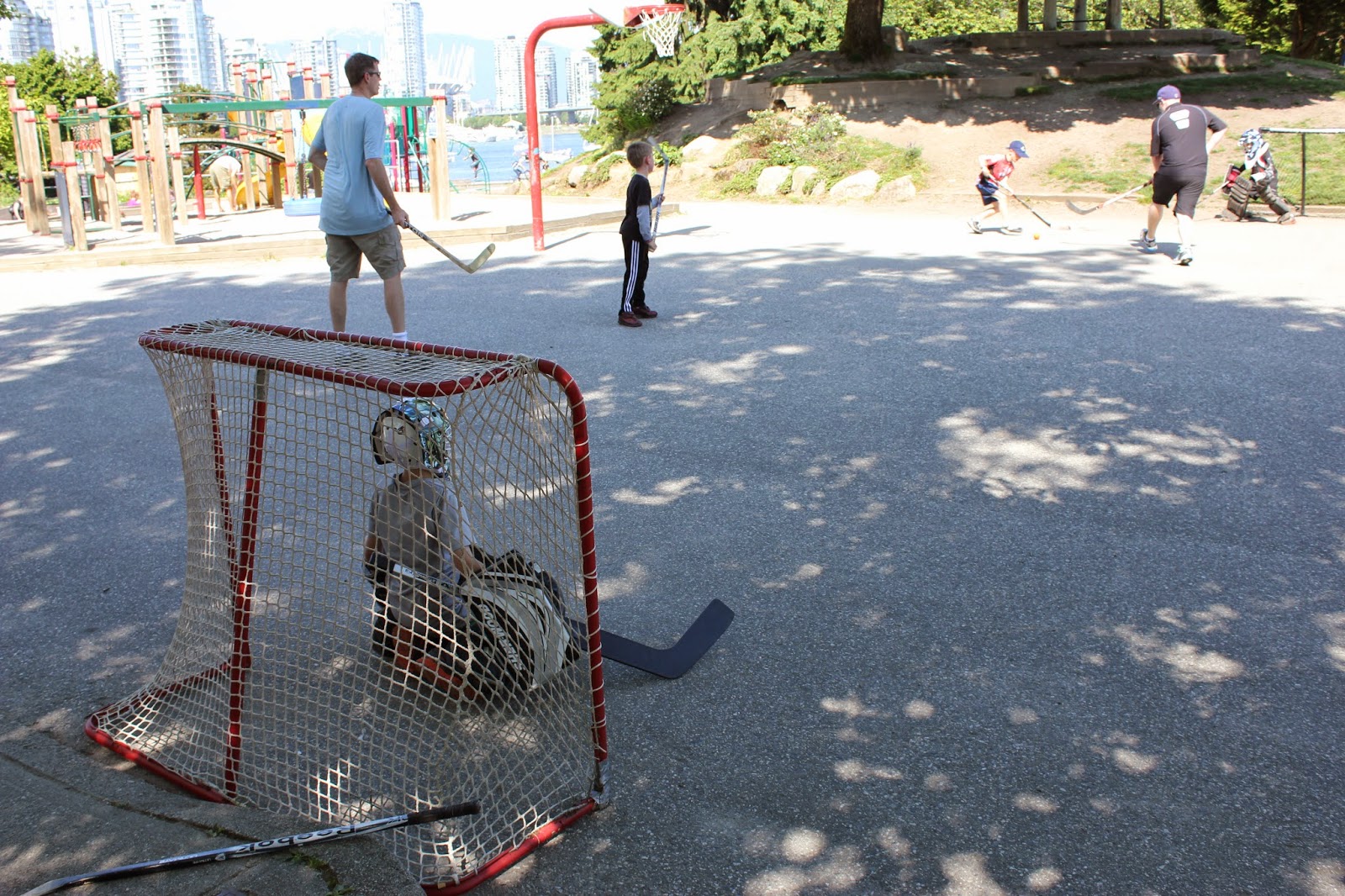 Hilary brought a few radlers (beers) and Tristesse also donated some delicious 33 acres beer to the cause. The sun was shining and it was a very pleasant way to spend the afternoon. 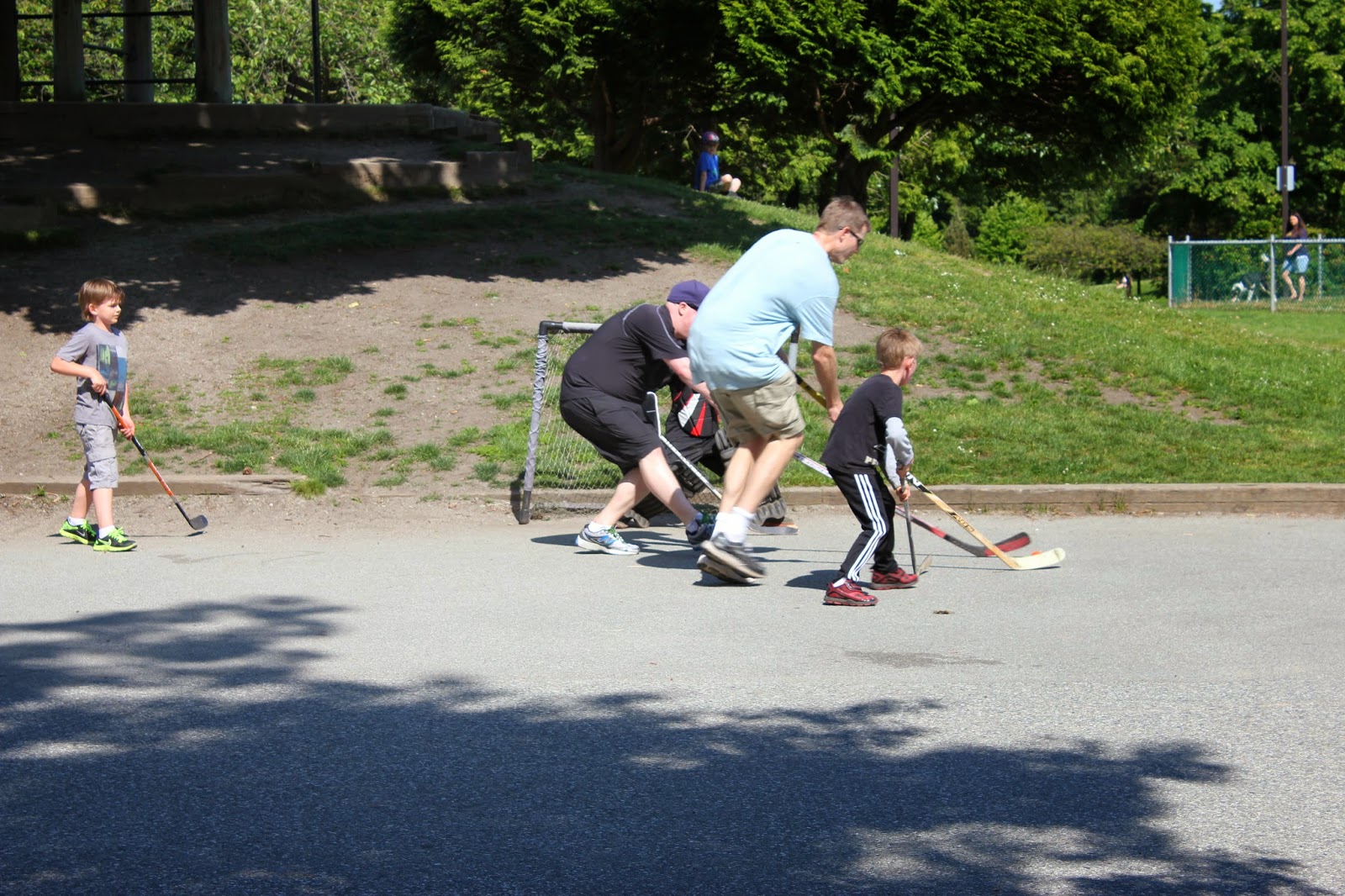 One of the short breaks...a quick cake stop: 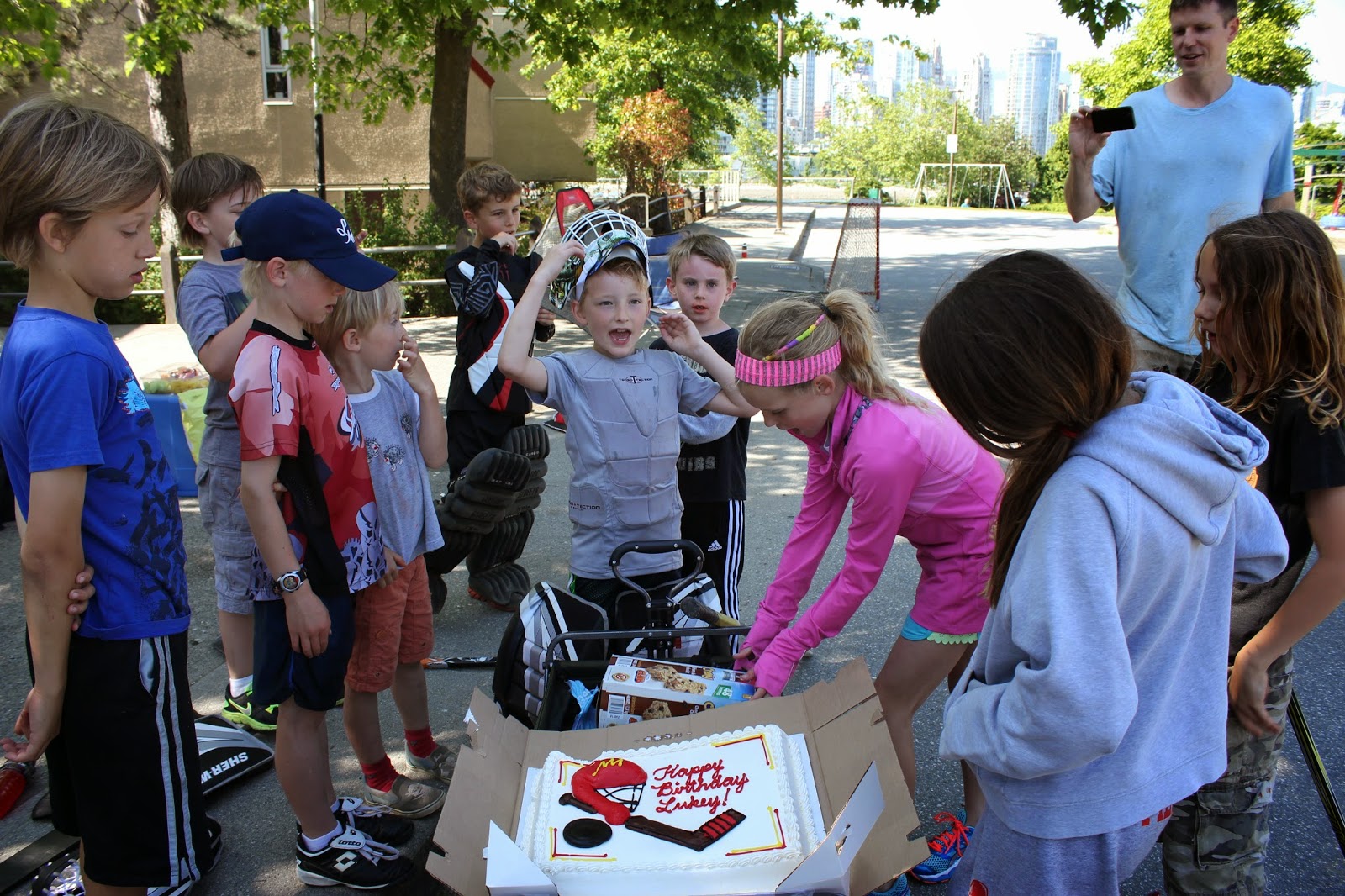 Lukey even pretended to "blow out" his invisible half birthday candles. 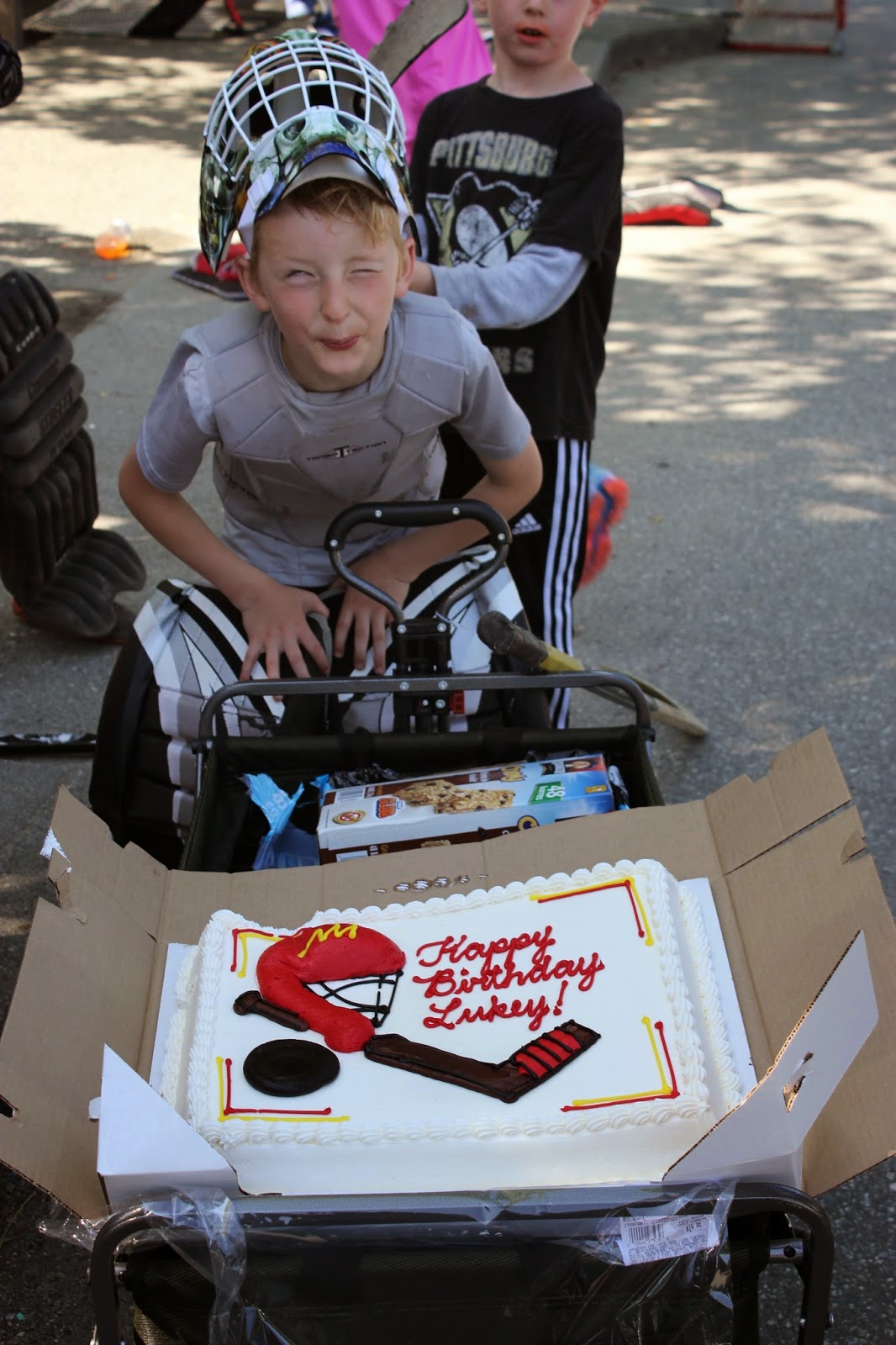 Even after all the kids had left, Eric and Lukey (and Jeremy and Matt) had another hour of hockey left. By the time they were done, I think Lukey was actually tired. Well, that was easy. Has there ever been a better dad than Eric, working hard playing hockey (not that he was complaining) for hours on end, all in name of his little guy's happiness. It would be an incredible sacrifice...if I didn't think he enjoyed it nearly as much as Lukey did! 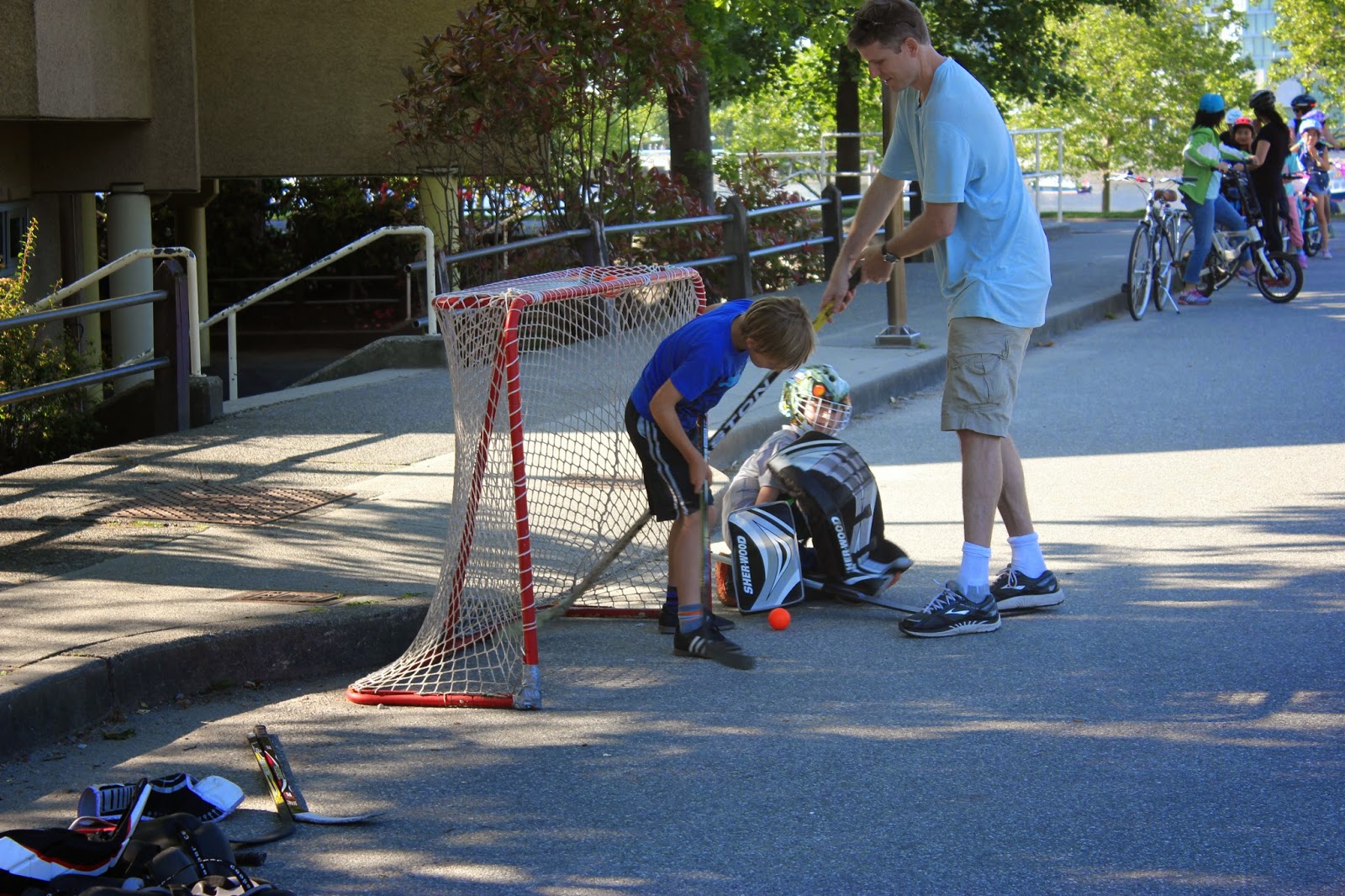 Posted by Ericandles at 3:00 PM