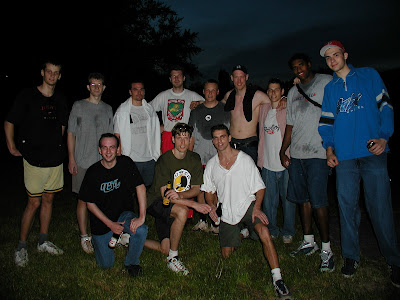 New Years Eve 2006. On this night, typically associated with wild drunken debauchery, I am sitting quietly by the computer while the kids play by my feet. However, the beers are flowing and we will have a fondue with Les' parents in a couple of hours. In the last few days down at Point Roberts, we have done lots or reading, playing board games and Scrabble and drinking beers by the fire. I have also taken advantage of the recent wind storms by collecting firewood from the plethora of fallen trees littering the ground. So far, I have collected wood from Oak Street, Stanley Park, the Arbutus Club and Point Roberts. I now have a decent stack of Alder, Birch, Hemlock, Cedar and Maple. I also recently got to play in the
Battle of the Bulge" football game. In what will hopefully be a Boxing Day tradition, I played 7 on 7 football with my friends before hitting "Ham Fest" (Steve Hall won a Ham while drinking at the Legion) in the evening. The day very much reminded me of this picture with my 2001-2002 Mattersburg 49ers basketball team. At the end of the season, Rich Anderson, Joey Vickery and I taught the Austrian's how to play football on a beautiful Spring day. We played all afternoon and then had a barbeque in the evening in a park right in the middle of town. We roasted Ferkel (baby pig) on an open fire and drank way too many beers. As we sat around the fire until 2 am, I told the Austrians, in very slurred speach, all about their local history. The next day, I woke with a hangover worthy of New Year's day butalso with the satisfaction of having passed along a little bit of historical knowledge to the locals.
Posted by Ericandles at 6:48 PM