As parents of young children, our lives are filled with a lot of responsiblity. At this particular stage in life, there just aren't as many hours left in the day for frivilous moments of fun as there were in our early 20's. Sunday, however, was a chance for us to let loose a little when 3 former team-mates from my UBC basketball team, and their families joined us, for a party down in Point Roberts. 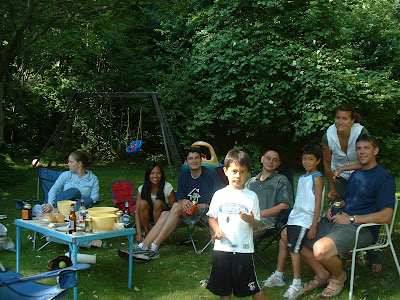 John, Trixie, Jack, Hunter,Cole and Gerald joined the 9 of us already down at the Point early in the afternoon. We feasted on onion cheeseburgers with these new flat buns (which I would definitely recommend), chips with gaucomole, fresh cherries from Brady and Lisa's garden, melon, blueberries and beer. 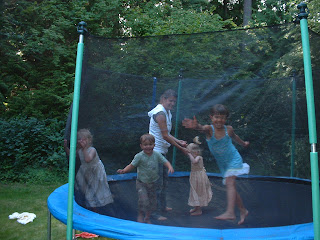 It was great to have the big sunny backyard to host all of these people and to keep the kids entertained. It was really interesting to compare how the girls played on the trampoline (think "Little House on the Prairie") versus how the boys played (think "WWE Smackdown").

At a particular moment in the party I happened to notice one kid playing hockey, another basketball, two girls wading through the pond, one person on the trampoline and a couple of more on the slippery slide. With all these distractions around for the kids, the guys were able to get in a pretty serious game of Bocci while the girls talked on the porch. Just the nature of our friendships, being former team-mates who competed every day in practice, make any activity we participate in pretty competitive. We upped the stakes by assigning shots of rum to the player with the worst ball each round. Things got silly quickly. Having said that, it was a pretty special day to be able to spend some time having frivilous fun with friends, reminiscing about some good old times and creating new memories as well. All the while the kids were safe, entertained and creating some new friendships of their own. 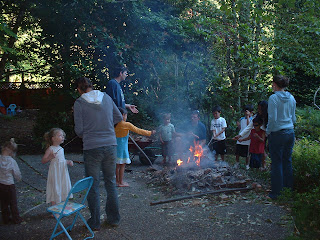 As the afternoon wore on we got the fire going and roasted hotdogs and marshmallows. The kids, who seemed like they would never fade, eventually went inside to watch DVDs. (Although it perhaps doesn't seem like such a feat now, in the moment I took a lot of pride in being able to crack the parental code on "Ice Age" and "Strawberry Shortcake".) With the kids thus entertained, we were free to continue the party outside listening to music around the campfire. At this stage in our lives, it was about as perfect an afternoon as possible.

The next morning wasn't so perfect however, as I had to get up early for a test in Richmond. There were about 700 questions from 5 different tests measuring everything from my ability to quickly work with fractions to my tendency to psychopathy. Although I might not have had the perfect preparation for the test, I figured anyone who had been able to crack a Sony Playstation code in my condition should probably be able to get a passing grade on the test. We will see next week.
Posted by Ericandles at 8:43 AM