E-The most Canadian of Canada Days in the U.S.A.

I often hear people from outside of BC say that Vancouver isn't the "real" Canada. Without getting into too much debate about what or where can really claim to represent the "real" Canada, I tend to agree with those people. We don't have the cold winters or wide open spaces and cheap land. Other than the NHL's marketing machine we don't follow a lot of hockey. We even have more places selling sushi then donuts!

Having said this, I am proud to be a Canadian and look forward each year to celebrating July 1st. This year we were down in Point Roberts, which, because of some geographic anomaly, is actually not in Canada. Somehow, without really planning it, we ending up having the most Canadian of Canada Days while in the U.S.A.

It started when I rented a log splitter on Saturday afternoon. For the price of one days rental, I didn't have to have it back until the store next opened on Tuesday. A log splitter is a fantastic machine, making light work of logs that just wouldn't crack with the hand splitter. It is even pretty safe because it works at a very low speed but high hydraulic pressure. The speed factor presented a challenge for me however as I had many tons of wood that I had collected last winter to get through. 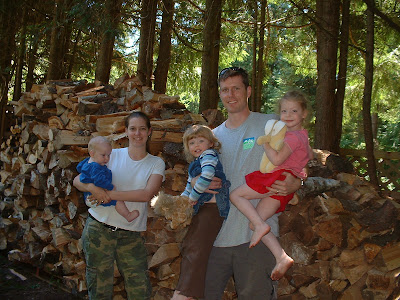 What I really needed was a team of people- and somehow, without my asking, in a very helpful Canadian way, the team showed up and worked all day. Les started the splitting, operating the lever with her left hand while holding Lucas in her right. Bryan and PJ came by early in the day, followed a short while layer by Joey who had just returned into town. Our neighbour Bill (also Canadian) came over to see what all the racket was about and joined us for about 8 hours worth of work. All day long the team worked diligently until there was no wood left to split. And then, tired but not hungry (Les made great fried onion cheese burgers for us and there was lots of beer to be had) we did the most Canadian of things- we went over to our American neighbour's house (he was out of town) and split his wood for a couple of hours.