Alright, alright. I know I am behind in blogging. Right now, we are in a slightly dodgy hotel in San Diego, planning to hit Sea World tomorrow. We also just realized that it is Veterans' Day tomorrow, so we might be sharing Shamu with every military family in the SoCal area. There should be enough whale to go around, right? Then, hopefully dinner tomorrow evening with my brother who happens to be here on business this week.

I will upload pictures from today later on, but we had a fantastic day on the beach in Encinitas. We camped (albeit for $35! for camping!) on a bluff overlooking the beach and then rented a wetsuit for the day. Eric and I body surfed all afternoon. It was glorious. And a great way to spend our 18th anniversary, which was also today. More on that in a couple of days.

Instead of all that, cast your mind back to a time not so long ago when a brave king and queen took their overstimulated prince and princess to...hold on, I have spent waaaaay too much time at Disneyland. I'll go back a few days to try and catch up.

The day after our first Disneyland adventure, we were joined by Eric's parents, who had flown to California to meet us for five days. The following morning we had a sleep in and then a swim in the sunshine at our hotel (which I would recommend, by the way...the Jolly Roger: reasonable price and stellar location). 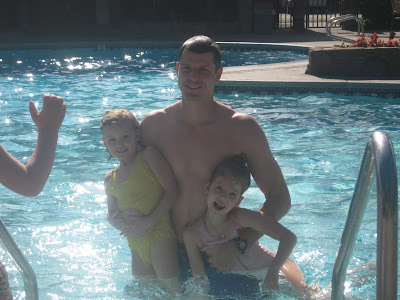 We rallied our group of seven out the hotel door and hit Denny's for breakfast. 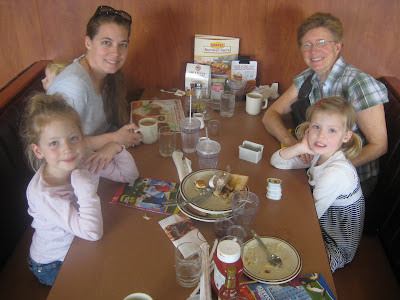 Our bellies full, we hit the red carpet at Universal Studios. 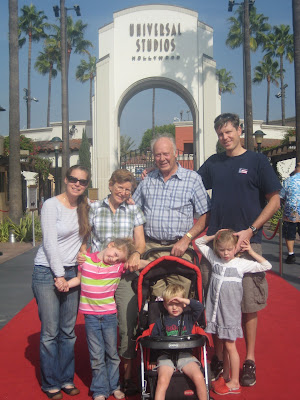 One potential sign that the recession is still on was the promotion offered by Universal Studios. If you buy one day's admission, you get a full year's pass for 2010. Even so, it wasn't crowded. You can see in this next picture, there wasn't exactly a huge heaving throng of humanity behind us. After our November experience, I don't think I will ever be able to imagine a visit to theme parks at any other time of year. 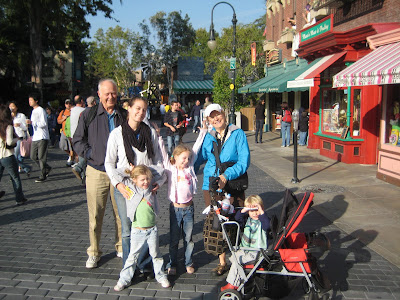 Characters however, were thick on the ground at Universal. Everywhere we turned, there was a six foot tall incarnation of a beloved film or TV character. Molly cracked me up, since she clearly understood that they were dressed up people, but she still wanted to hug every single one she encountered. I pity the people in the costumes. Awkward, mute interactions with kids abounded. At least it wasn't August heat for those plushy guys. 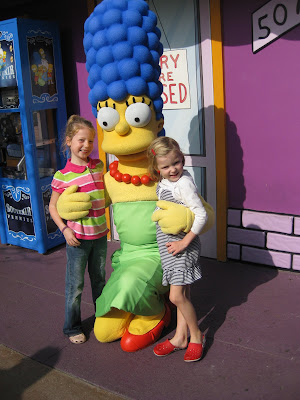 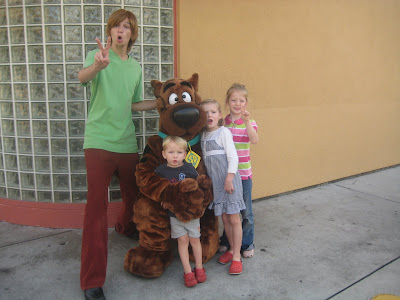 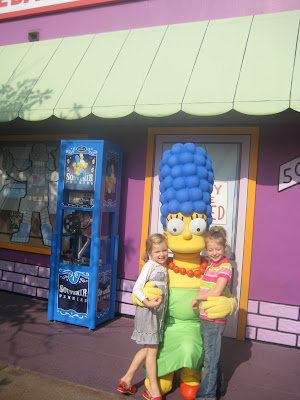 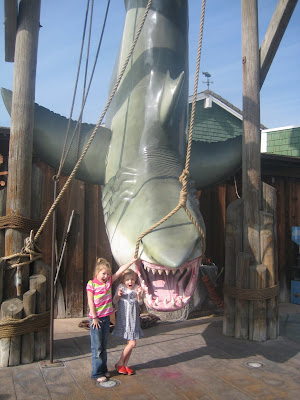 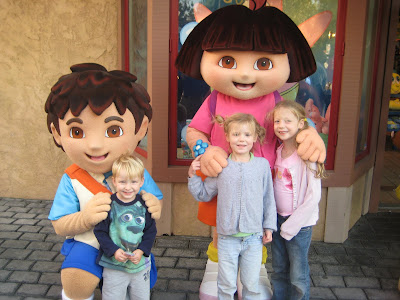 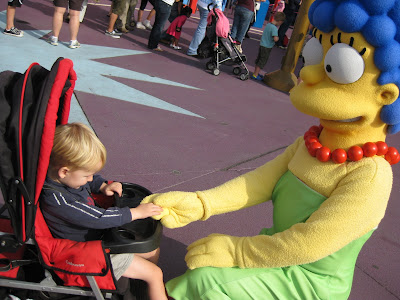 Aside from the great company they provided, having Jane and Dave along worked well, since we could more easily hop on and off rides that didn't suit all the kids. We also hit the shows, like Backdraft and Special Effects. Like Disney, I was impressed that the theme parks don't seem to skimp on value. They don't offer as little as possible, but instead appear to throw a lot at the production value of the entertainment.

We got an extra treat when our studio tour was interrupted by Jim Carey on our way past Conan O'Brien's set. It took forever to set it up, but Jim Carey ran out and shook our train. It was fun to see him live in action, but it may have been lost on the majority of our group. Jane and Dave didn't know who he was and the kids weren't too keen. Molly said at one point when we'd been stopped for a while, "These guys are wasting our time..." In fact, they sort of did. We missed our last show planned for the day, so got free tickets to return again. And since you can never have enough theme park (okay, lots of people can, just not me...), we did go back.

Here is Jim Carey (not Eric's best shot, but it was challenging...hint, he's the one pointing...): 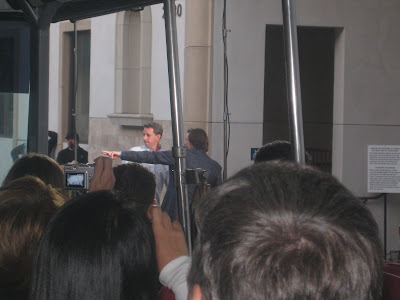 Our tuckered out but happy crew grabbed pizza on the way back to the hotel. After all, we had to get a good night's sleep, since we were hitting Disneyland the next day! But I can only catch up one day at a time... 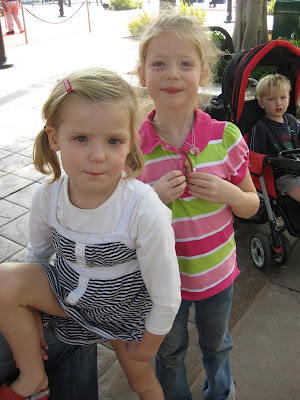 Posted by Ericandles at 8:55 PM