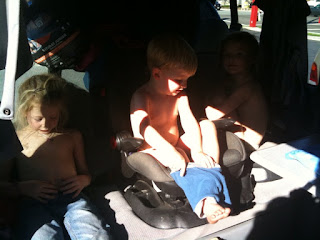 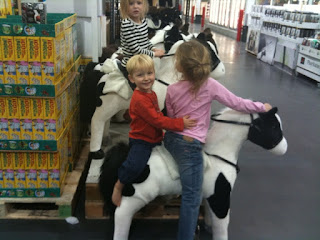 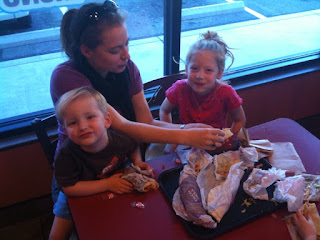 We didnt exactly ease the kids into the trip.....instead we drove over
a thousand kilometres. Happily the girls were pretty good and Lucas,
who we were most worried about, was fantastic. We powered through to
get to Portland's Costco before close. With 5 minutes to spare, we had
time to buy a membership and our Southern California Citypasses. With
Costco's discount and not paying any sales tax in Oregon, we saved
almost $200 for the family.

Before leaving my Mom mentioned that on her trip through the States a
couple of years ago they often spent the night at Walmarts along with
dozens of other travellers. We looked into the phenomenon a bit and
decided it might be a good option on big driving days where we just
needed a place to pull over.

Sure enough when we got to the Medford Walmart, we joined about 20
other vehicles doing the same thing in the parking lot. It felt safe
and was quiet......at least unti the Butler kids got all wound up when
we popped the roof for them. We slept soundly until the leaf blowers
started at 9am.

It's now early afternoon and we have stopped at Taco Bell for lunch. I
don't know what was more surprising......how much Les liked the Fresco
chicken taco (she was going on like she found a quaint, authentic
Mexican joint) or how hot it was. Here are the kids reacting to the
change in climate like they always do, by stripping down.

Posted by Ericandles at 3:58 PM