The miles seem to take about twice as long coming home as they did on
the way down. Today we drove from Vegas to just outside of Salt Lake
City, which although only four hundred miles apart, felt like the
longest drive of the trip. Perhaps it's just leaving the warm sunshine
for the rain storms that await us, or the snow we are actually parked
beside tonight, but somehow the trip home is much more difficult
psychologically. We are close to the three thousand mile mark and
have been on the road for almost three weeks, so there's probably a
little fatigue factor as well.

Last week, after spending a great day at the San Diego zoo with Les'
brother PJ, we drove all evening to Phoenix. The only surprise on the
trip was being stopped a couple of times by US customs officers
looking for illegal aliens using the interstate that runs along the
Mexican border. We stayed with our friend Ed Mohs in Phoenix, who
displayed his incredible hospitality by putting us up for a couple of
nights and never showing any signs of the stress that must come from
such a dramatic change to his normal peaceful routine. 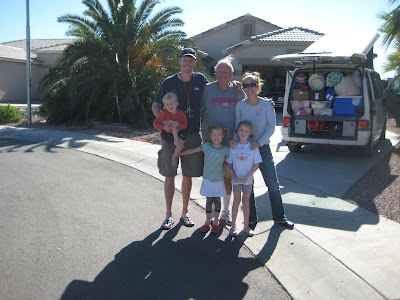 Even Lucas'
floaty incident in the hot-tub didn't seem to rattle Ed.

Les took the kids to the Phoenix science centre while I went with Ed
to look at a few foreclosures. Although prices seem to have stabilized
and are possibly increasing slightly, you can still get an incredible
amount for your money. Mostly we were looking at nice homes, less than
8 years old, in good neighbourhoods for around $80,000.

The rest of our time in Phoenix was spent relaxing and just trying to
soak up the sun, as if it were possible to somehow store it up for the
long winter ahead.

We eased into our trip home by first doing a short drive to Las Vegas.
Les proved her extreme internet bargain hunting skills again (restaurant.com
saved us hundreds of dollars and introduced us to many good
restaurants we would never have otherwise gone to) when she was able
to get us into the Four Queens hotel for 3 nights for $33 (total, not
each night) including all taxes and fees by using orbitz.com. Although
it's no Caesars Palace, the hotel was more than adequate, clean,
comfortable and right where we wanted to be in old Vegas. 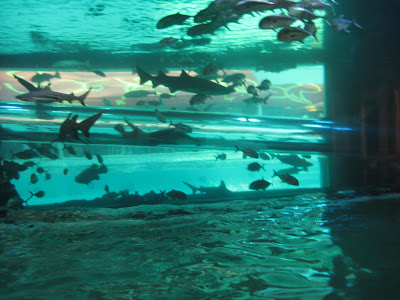 For the
second year in a row I got to see some guys from Delta compete at the
world championships of the combat challenge.

I also had my own challenge when we took the family to the strip one
evening at about 7 pm to experience the Vegas sites. After a couple of
hours and maybe walking half the strip, Lucas and Fin decided they had
had enough. With all their weight loaded in the front making steering
really difficult, it felt like my own extreme event navigating the
stroller through the throngs of people on the couple of mile walk back
to the car that finally ended close to midnight.

We spent a couple of hours each day in Vegas sitting by the the pool
in the sunshine and taking the girls swimming. 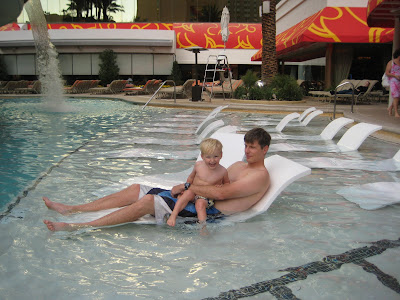 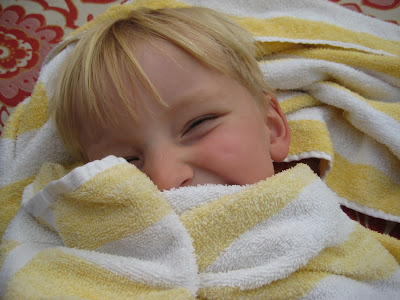 On one of these swims
the whole pool area was invaded by over one hundred contestants from
the Miss America Fitness competition. Although it's tough to really
complain, it was a bit of a scene having all the firefighters from the
combat challenge and all the girls in the pool at the same time. 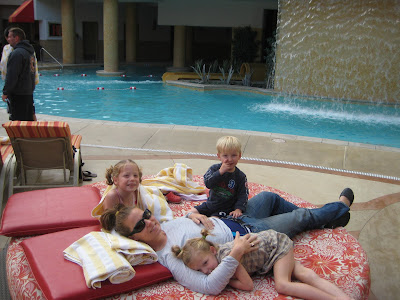 With
a peaceful swim out of the question, there was nothing to do but grab
a semi-submerged lounge chair, put on some sun glasses and watch the
scene.

Of course, being in Vegas we had to take advantage of some good
eating. We ate a pretty decent prime rib buffet when we stopped at
Laughlin on our way into town. Molly went crazy fir the profiteroles,
which I don't know how to spell and which she prefers calling
"puffers". We had some good meals at Magnolias in the hotel and
treated ourselves to a room service breakfast this morning as a
goodbye to Vegas thing. 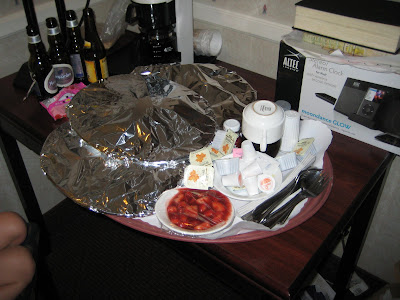 However the best food came at the Memphis
barbecue house. Another pleasant surprise from our restaurant.com
experience, the Memphis barbecue had big portions of really good
tasting food, at not at all unreasonable prices. Although my head may
be slightly sad to leave Vegas, I am sure my arteries are breathing a
big sigh of relief.

As soon as we left Las Vegas, the weather got progressively colder. We stopped for the night by Salt Lake City. There was snow on the hills. 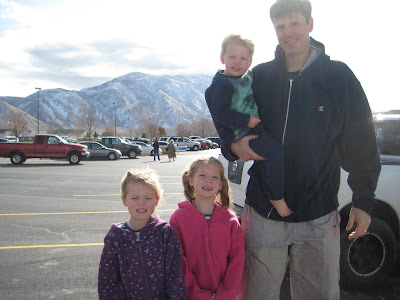 Here we are outside of Boise, visiting our friends Becky and Mantia on our drive home. 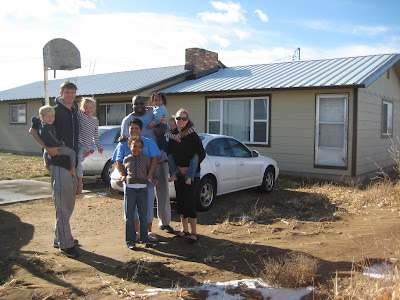 Posted by Ericandles at 1:56 AM