E- Turning a trip into an adventure 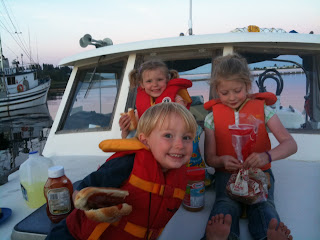 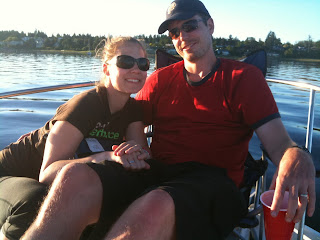 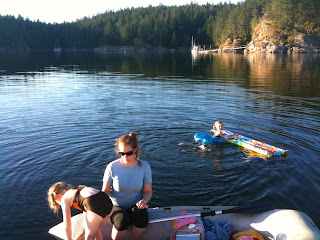 Andrew McTagert told me before I left that his Dad and he figured a trip could only be classified as an adventure if there was a least one moment in time where they wished they had never set out in the first place. I kind of like that definition, and it helped me in Comox when this trip officially took on adventure status.

After a pretty smooth trip from Nanaimo to Deep Bay, we were feeling pretty good about things. Despite some wind and choppy seas we were doing pretty well. However on our third day we had a couple if intermittent RPM surges that were disconcerting enough for us to get the boat looked at in Comox.

By the end of the next day Les and the kids had arrived, and the engine had been looked at and any problem remained undiagnosed. The only thing the mechanic had done was drain a little water he saw at the bottom of our fuel filter. We decided I would go under the boat to look at the propellor for any possible problems. However, 3/4 of the way across the bay to where I was going to dive, the boat stalled an would not restart.

Our primary back up plan for an engine failure has been to get our dinghy and 9.9 hp engine to tow us to where we need to go. However, Bryan and I, earlier in the day, had found out that the little outboard had seized up and also needed to be fixed....so it was waiting back at the marina for the outboard mechanic.

I decided to do the dive anyways and found nothing on the propellor but did discover the I am not a big fan of swimming underneath boats. Since I was already wet and there was little wind I decided I could sit on the swim grid and get us across the bay to the marina. Two broken paddles later and one tiny gust of wind quickly exposed the flaw in my plan. I knew we truly were having an adventure as I rode the swim grid home, broken paddle in hand, being towed by the mechanics to diagnose a new problem, trying to forget the old one still hadn't been resolved.

I am starting to learn there are good days and bad days on a boat....and Monday wasn't a great one. However, on Tuesday I got to learn a lot more about our engine from a great mechanic (who also happens to be a free miner with several gold claims around the province and a writer) and the rest of the family got to know Comox. At the end of the day we had a nice dinner and beautiful sunset out in the bay.....and oddly enough was a pretty good way to spend our 8th wedding anniversary. Wednesday was the type of day to make it all with while. The trip from Comox to Cortez was spectacular. The air was really warm and without any wind and the sea was dead calm. The boat ran beautifully, almost like she was try to apologize for her little tantrum on Monday. We pulled into Manson's Landing in Cortez around 5pm and hung out on the beach and in the water until after 8. We rowed back out to the boat and the girls swam some more while Les and I cooked burgers on the barbecue. I am currently writing this in shorts and a T-shirt at 1am, surrounded by seals snorting in the water and under as clear a star filled night that I can remember. It's one if those rare times that I can clearly see the milky way in the sky.