With all the work of the basketball camp and Finny's birthday celebration behind us, we started our journey with Luki to Ost Tirol...a drive up into the high mountains and the embodiment of what most people picture when they think of Austria.

But how could we drive east towards Tirol without stopping in at Kapfenberg to see our old stopping grounds and to visit our old friends. Bernie was the massage therapist when Eric played for Kapfenberg...he was a real character then and nothing has changed. Bernie invited another old teammate over and served us a fantastic lunch in his garden.

Which didn't prevent us from spending some time in his keller (basement)...basically a full-sized and fully stocked bar! 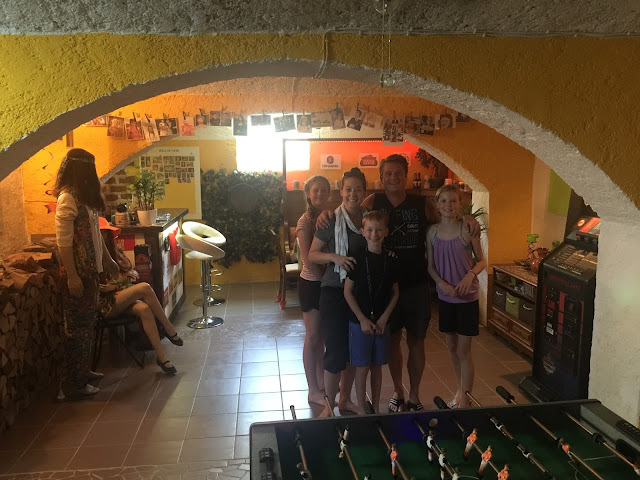 It was a beautiful day outside, but it was hard to resist revisiting olden days of killing time with friends in Austrian bars! Of course, in the good old days, the girls sitting on the players' laps were a little bit older. 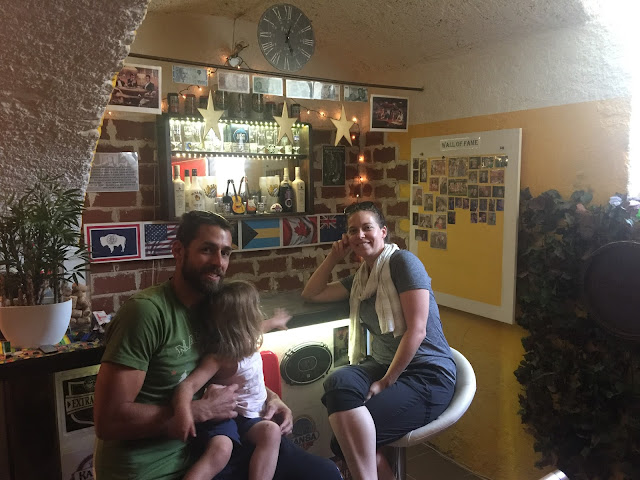 Lunch was delicious and it was so much fun catching up with Armin, Bernie...and Bernie's son Pascal, who was just a little guy when we lived there. Now he's a man with his own life...but JUST as lovely as he was when he was a kid. 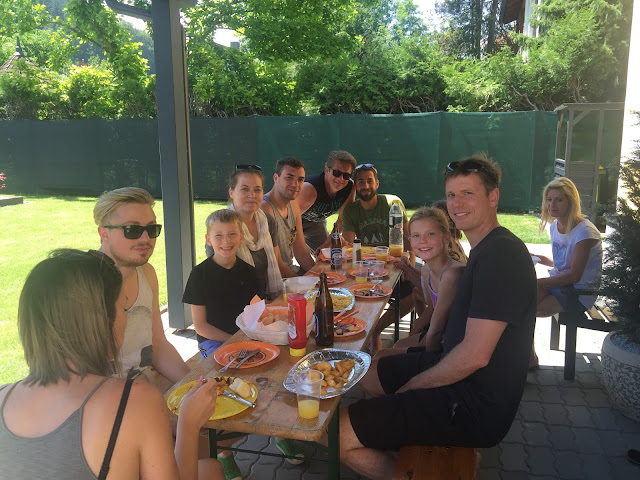 We took some time to play some soccer in the yard. 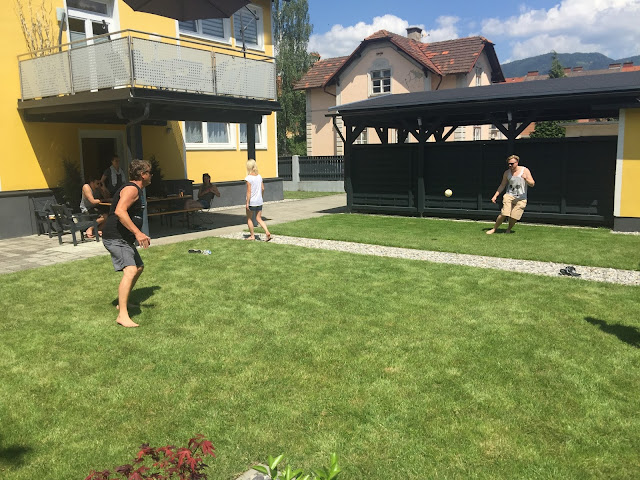 Lukey was in heaven. 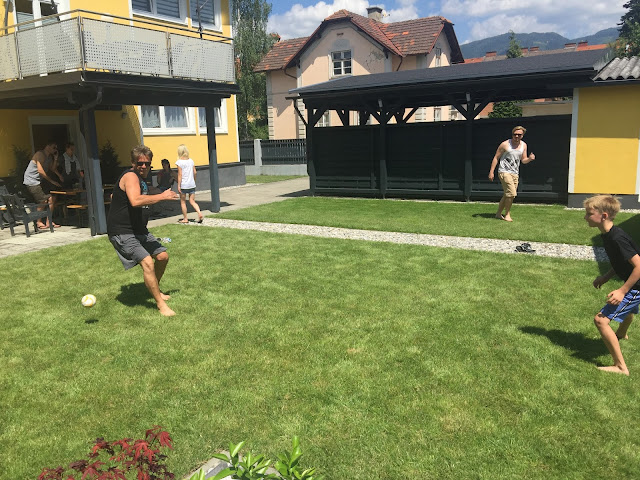 It was scorching hot and we had quite a bit of driving ahead of us, but it was hard to leave this little slice of Austrian paradise. Kapfenberg was never my favourite of the places we lived, but people like Bernie made it a much better environment. 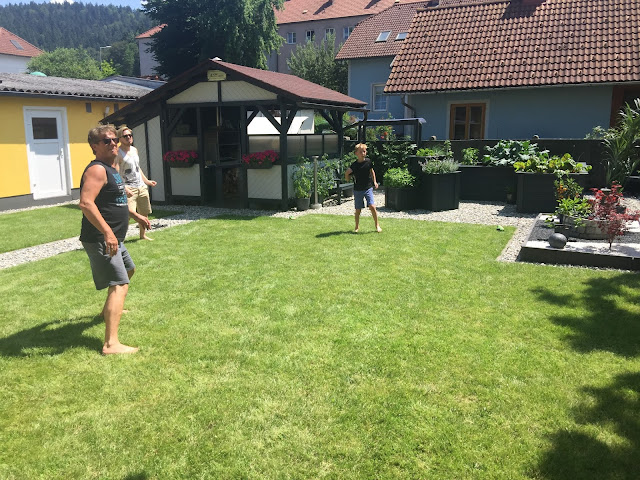 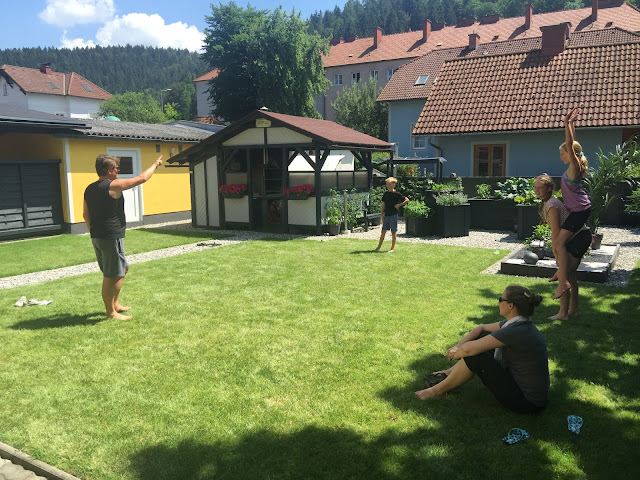 Next up, a gorgeous drive through the heart of the country. Everything sparkles in the sunshine and the rural areas of Austria looked pastoral and spectacular. 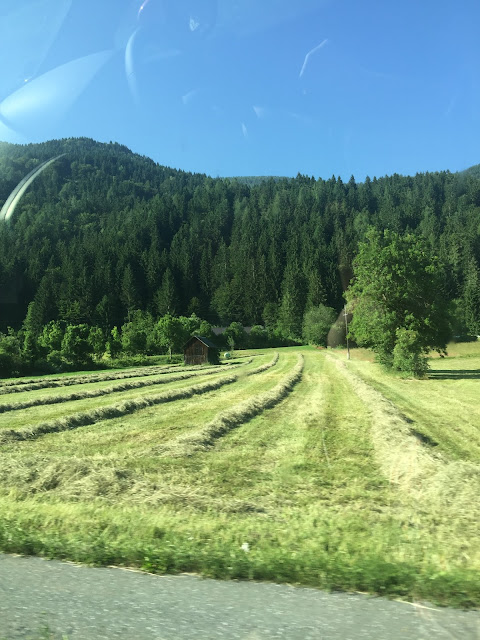 Even when nature calls, the roadside stops are picturesque. The mill below was super old, but like so many things in the country, it has been lovingly kept up over hundreds of years so that it is still functional. I wonder how many people have walked up here in their lifetimes to turn the wheel on this mill? 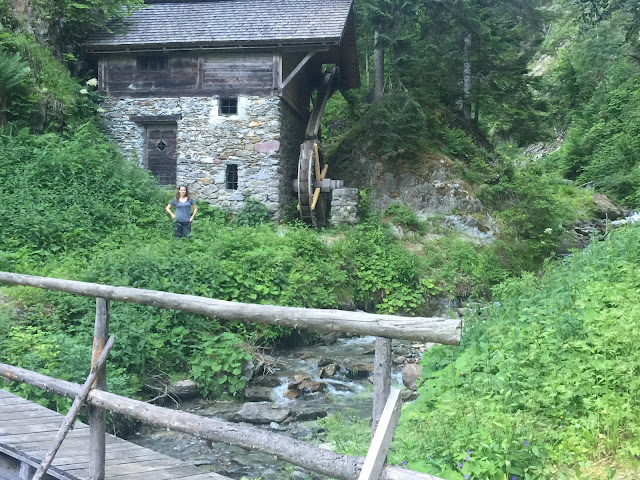 Finally, we arrived at our final destination: Obertilliach. A tiny village perched on the hillside, it looked like a picture book. 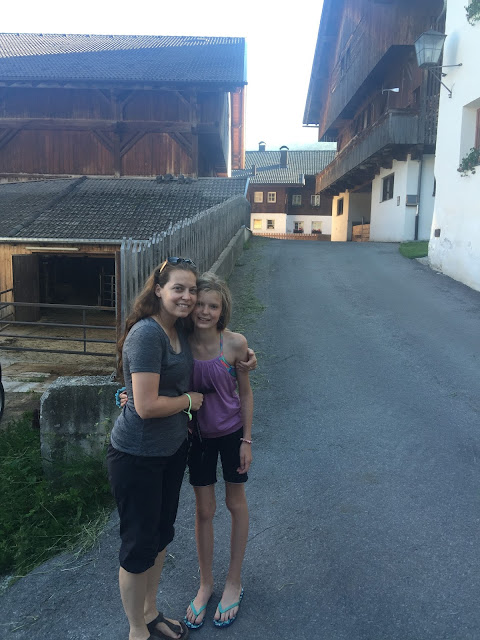 Every home was the half-timbered style so typical and traditional for the area.

Cows wandered all over and the little streets wound through the village in such a way that it was impossible to know what was a road and what was a driveway. Probably, it was all pretty much the same...! 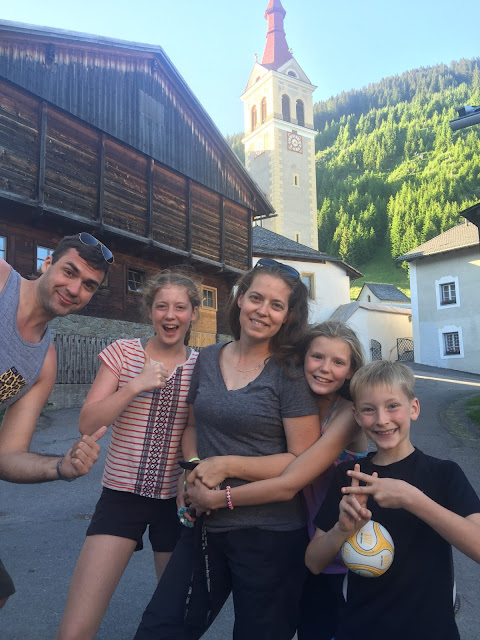 Our closest neighbours were cows... 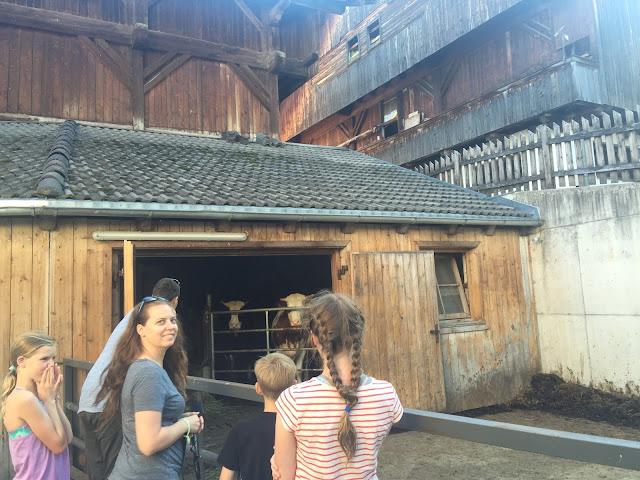 Below is the view we had from our room: 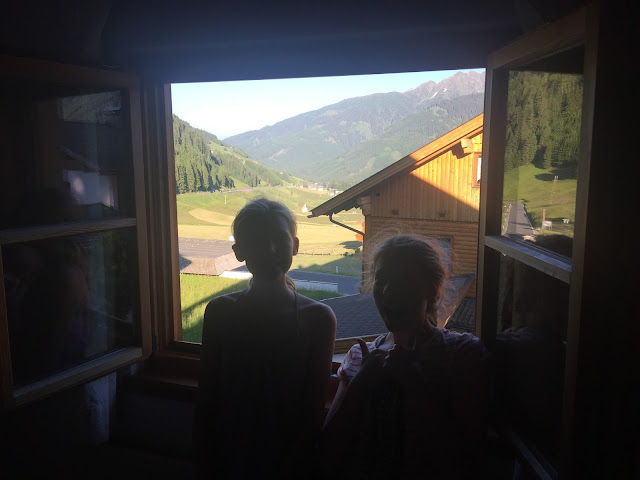 It was really neat, because this was a place that Luki organized and reserved. We wouldn't have known where to go or what to expect in this area...in fact, it is the part of Austria we have spent the least amount of time in...so it was really cool to sit back for a part of the trip and let Luki take the wheel. 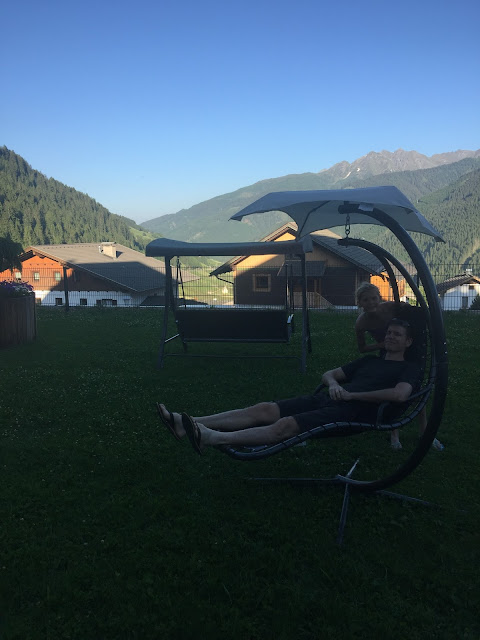 Another cool part of this spot was that it was a half-pension, which meant breakfast and dinner at the hotel. 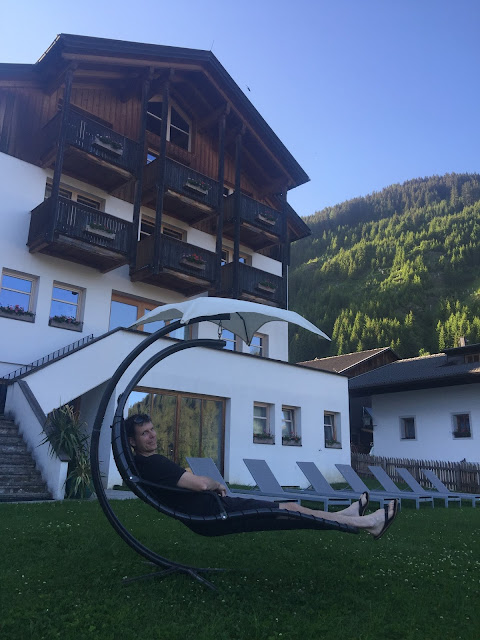 The first night's dinner was so exciting. It was sooooo Austrian, which I love. The menu was full of things that I haven't eaten since we left...things that I loved so much while we were there. Cream of garlic or pancake soup. Zwiebelrostbraten. Real schnitzel! Yum!! 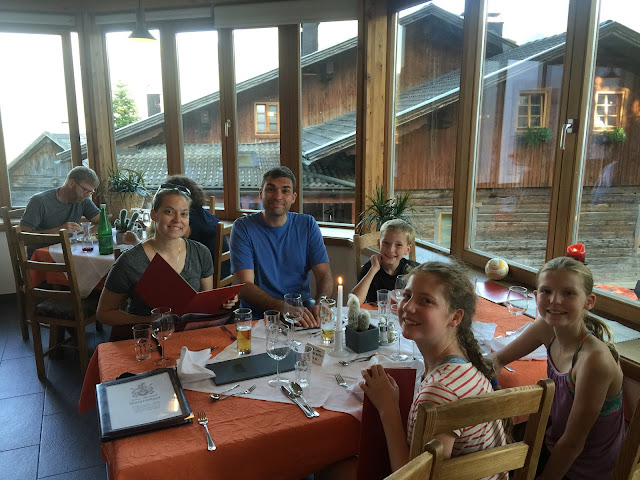 It was so hard to choose. We could order anything off the menu and it was a challenge! 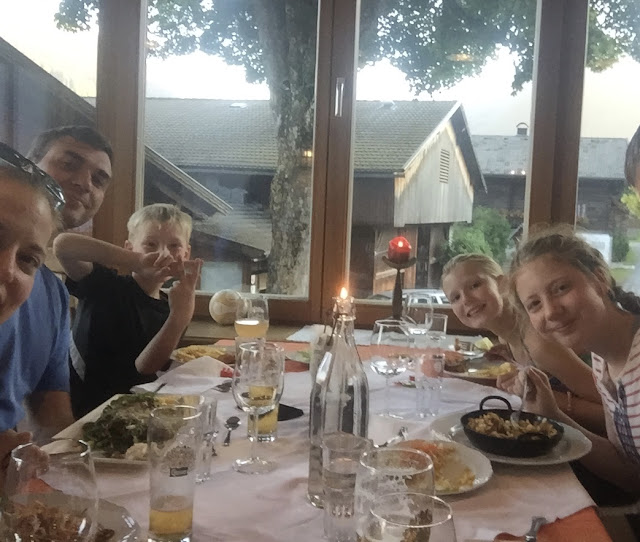 Everything was delicious and it was all capped off with Eispalatschenken...basically pancakes filled with ice cream and covered with chocolate sauce and whipped cream. What's not to like? 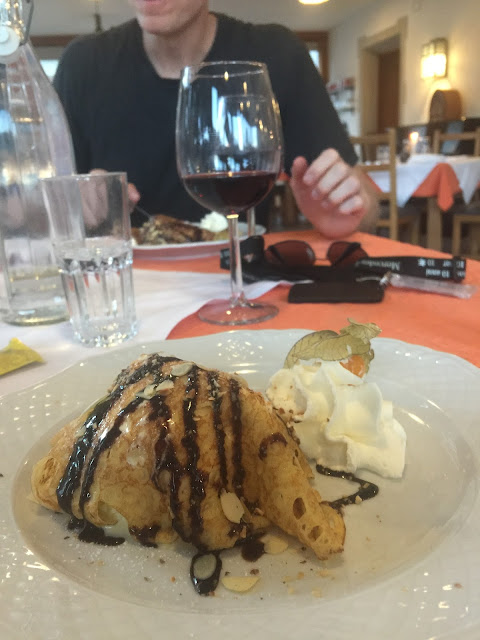 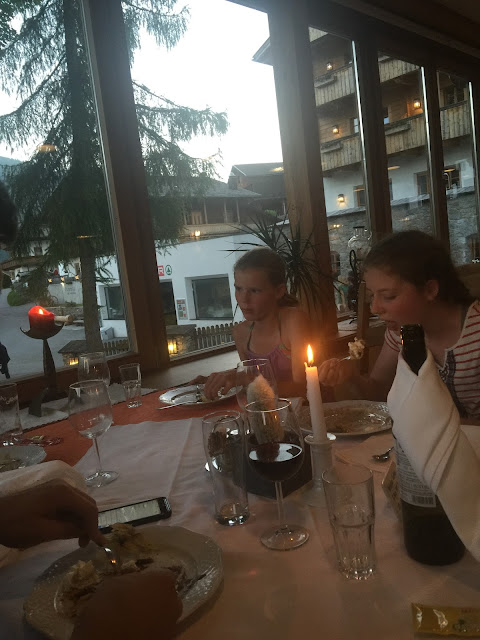 And awesome to see the kids enjoy this items that we loved so much when we lived in Austria. 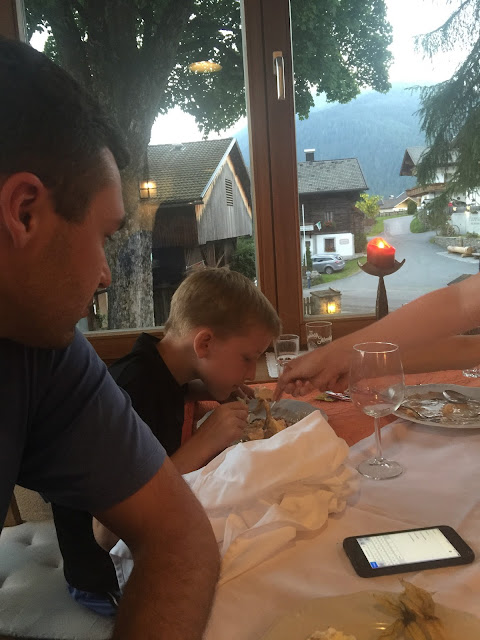 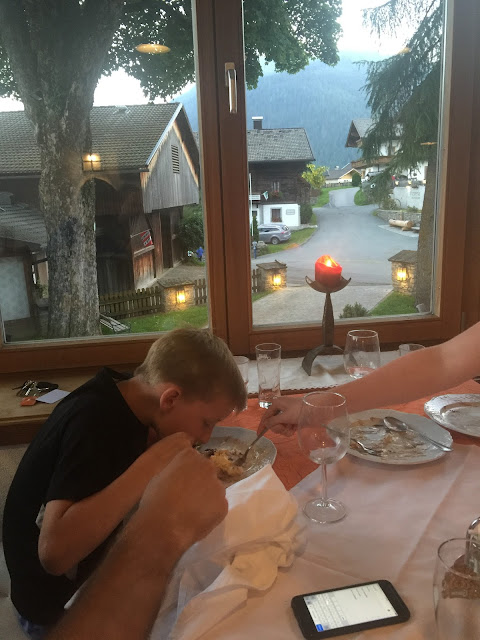 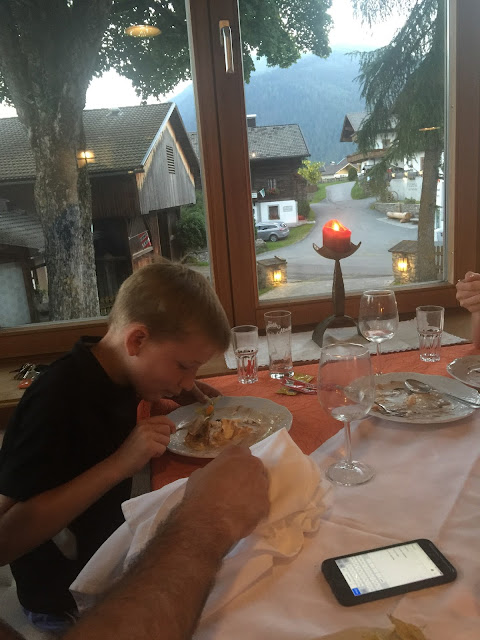 There was even a trampoline with a view...! 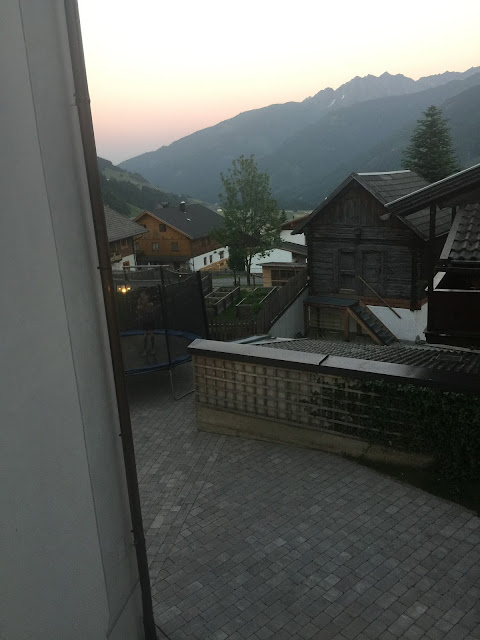 Posted by Ericandles at 3:36 PM