I don't know if it was foolishness or pure genius, but we felt that our success and fun on bikes for our first day in Paris was a sign that we needed to bike MORE. We slept in until mid-morning in our Airbnb in Versailles, then drove back into town (fyi, if you are looking for parking, the internet has been a parking game changer since we lived her in 1997/1998...we found and paid for parking before we left Versailles and it was super reasonable and very easy!).

Eric dropped the kids and me off at the Trocadero (across the Seine from the Eiffel Tower) for a picnic lunch. There are no pictures of this picnic lunch. Why, you ask? Because it sucked.

The kids had seen the green spaces around the fountains of the Trocadero from the top of the Eiffel Tower. They wanted to go back to picnic. When we arrived, they weren't enamoured with the company we had around us. People were "sketchy". They were smoking. The grass was "yucky". We moved away from our first spot and relocated lower down and closer to the fountain. Then Molly sat on a full litre of apple juice, which soaked her and destroyed the juice. Then they tried to drink the juice that was left and all three basically poured juice all down their fronts. Why did they EACH do this? Excellent. Question. One I may have loudly asked them myself. Then Molly spilled Yop all over and we were sitting in our own garbage pile. We were now "sketchy" people who had made the grass "yucky" ourselves...at least we weren't smoking...

Eric arrived and we got the heck out of there.

We signed up for the Paris bike share program, Vélib'. Even Lukey, who braved climbed onto a bike that was too big (and SUPER heavy) to brave the Paris traffic.

We took it pretty slow at first. I only screamed for the kids to stay to the right a few dozen times (Eric led our parade and I was the caboose) before our navigator (Eric, just to remind you) steered us right into the traffic circle at the Charles de Gaulle etoile...you know, around the Arc de Triomphe? 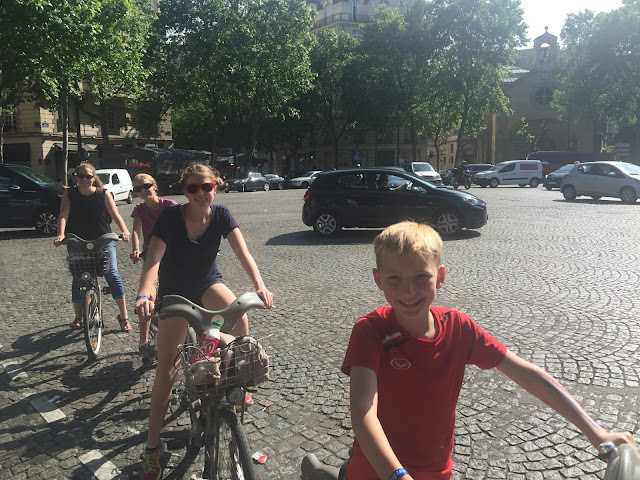 Here we are on the Etoile: 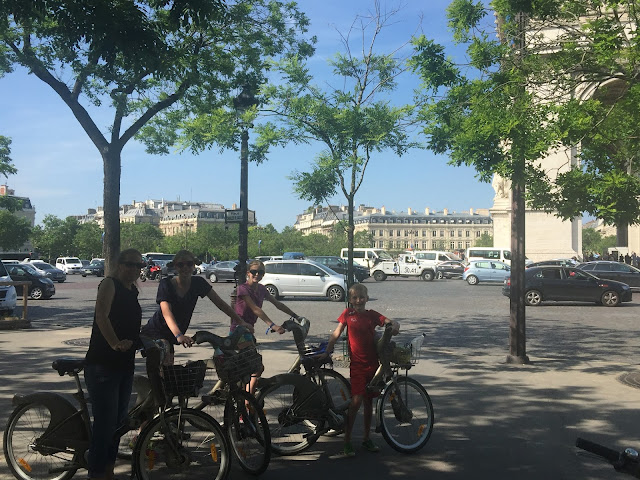 Sort of crazy, but the kids were AMAZING (quite a switch from the picnic debacle...). 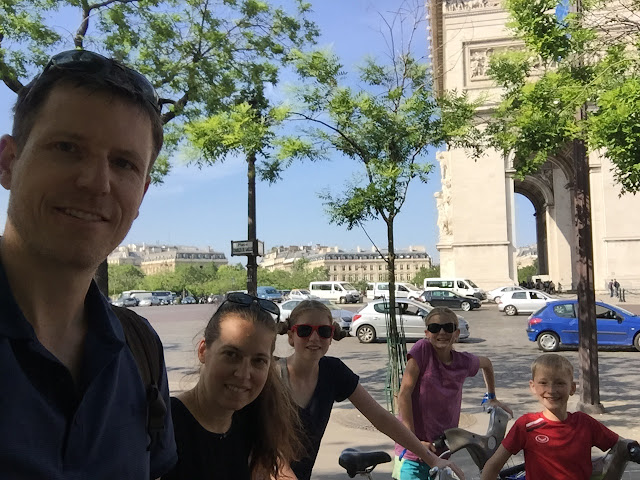 Emboldened and undeterred by the traffic building during the rush hours, we headed off towards Montmartre. 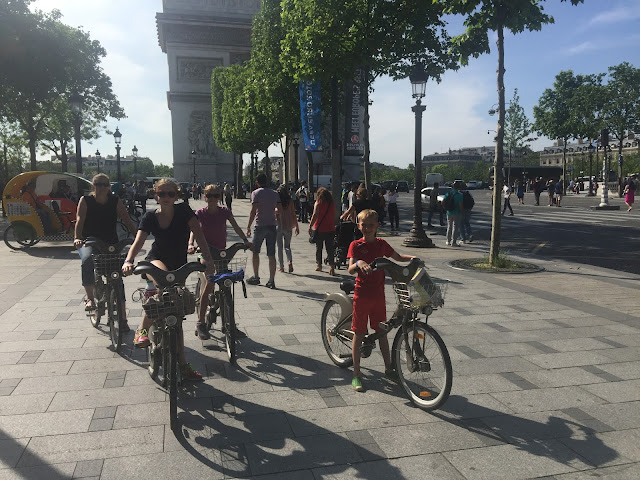 The bike lanes were all crowded with cars and trucks stopped. It is the EuroCup, so it was particularly nuts here right now. There were scooters, cars and trucks all whizzing past, but the kids were rocks. Fearless rocks. 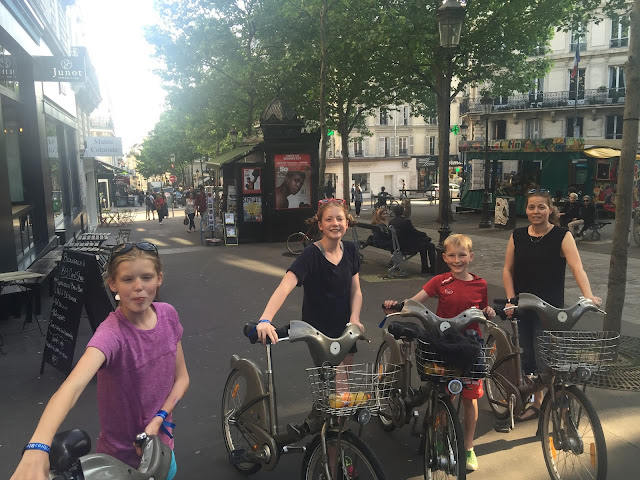 We made it up the huge hill to glorious reward of the city view at Sacre Coeur. 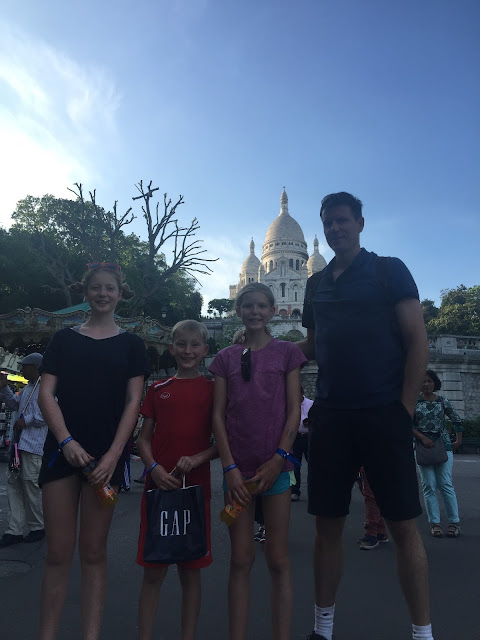 We sat on the steps, listened to live music, and enjoyed the crowds. 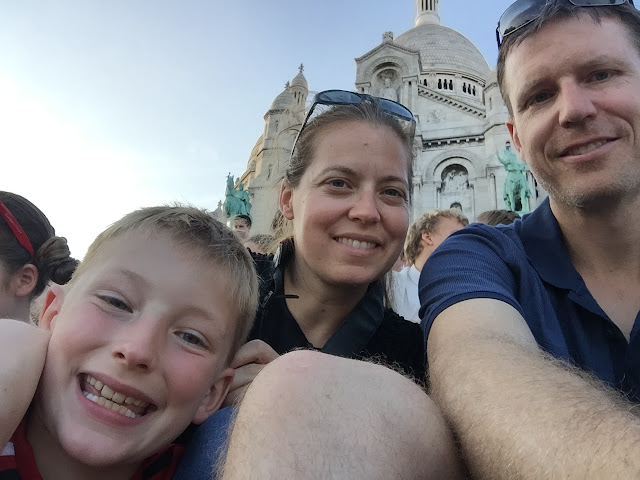 We were lucky to catch a performance by Iya Traore, who is a little bit YouTube famous (he's shorter than Finny!). His skills were pretty mesmerizing. 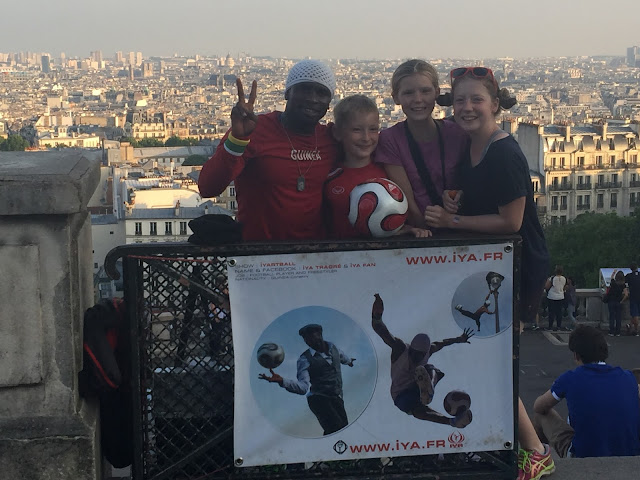 Here's a shot of him climbing a light standard, with the gorgeous view behind him! 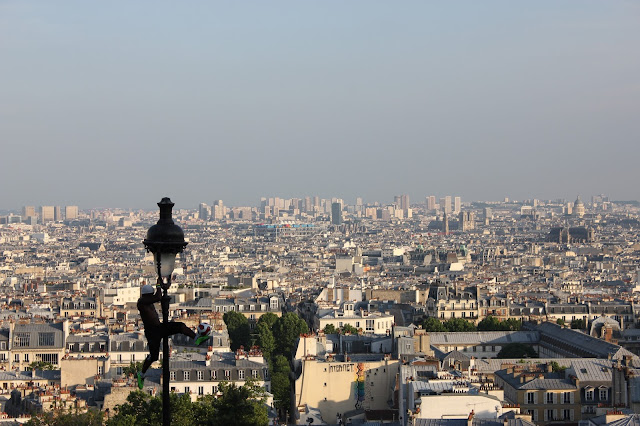 We grabbed dinner in the shadow of the Church at Pizza Babalou, an awesome find thanks to Yelp (honestly, Internet...where were you when we lived here and everything was a mystery??). Refuelled and keen, our plan to have Eric bike alone back to the car (about 6 or 7 kilometres) were tossed aside. We all decided to bike back together. It was so much fun. And we even did an accidental drive by of the Moulin Rouge. 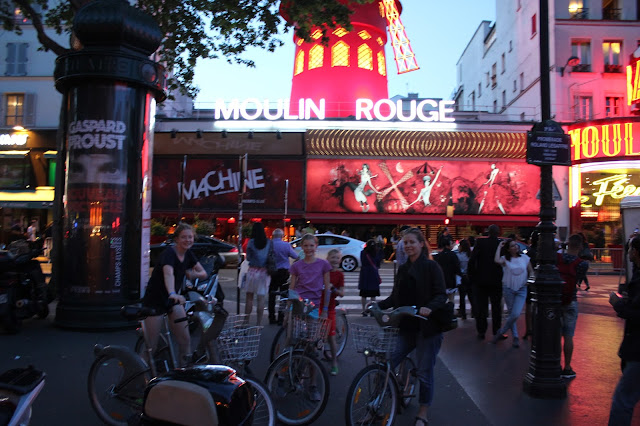 Posted by Ericandles at 4:35 PM