Well, just in case you didn't get it from the post title, or the inflatable crown on her head...it was Finny's birthday.

We had a day planned at one of Eric's and my favourite places in Europe: Therme Loipersdorf. The therme (hot spring) was a sponsor of Eric's team the year we lived in Fürstenfeld, so we went at least once a week to enjoy the warm water and gorgeous setting.

We set out towards Fürstenfeld and stopped to show the girls the public outdoor pool we used to take them: 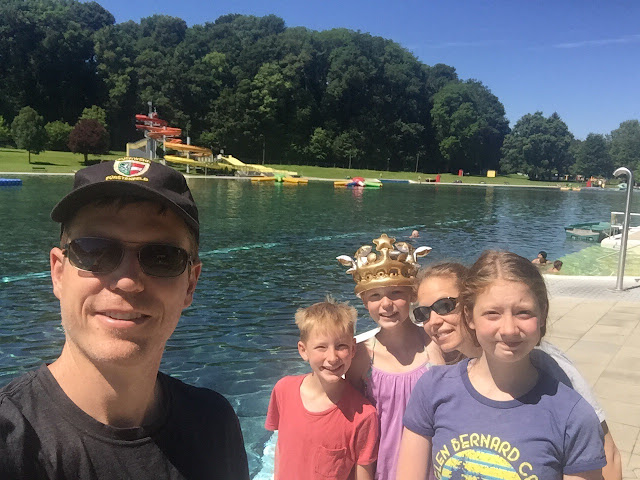 The spring we lived in Fürstenfeld was spectacular and we logged quite a few hours by this pool...Molly wandering around and baby Finny splayed out on a blanket in the shade.

Eric was even wearing his Fürstenfeld fire department hat...we were almost like locals! 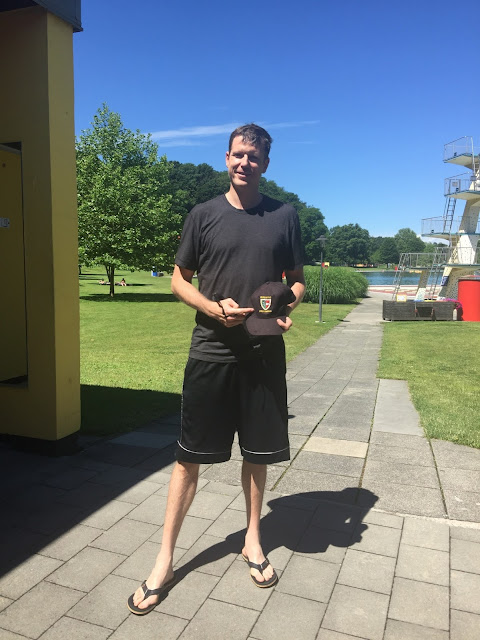 But we weren't there to swim in the public pool...we were on our way to Loipersdorf, so we got in the car and headed to our final destination, where Luki was waiting to join us for the day. 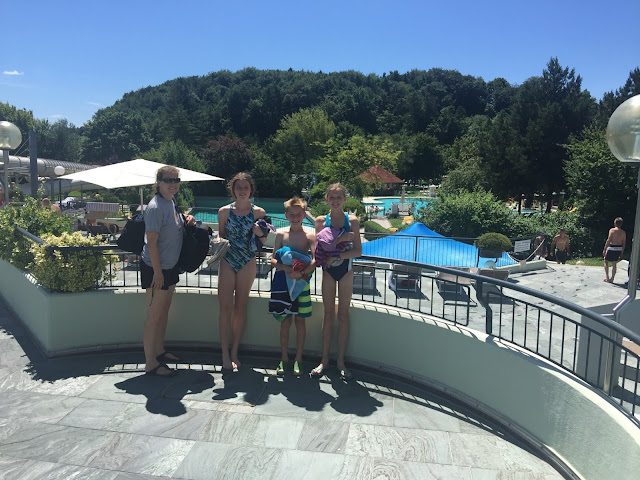 Luki had already scoped out great seats outside for us...we laid down our towels and hit the pools and slides. 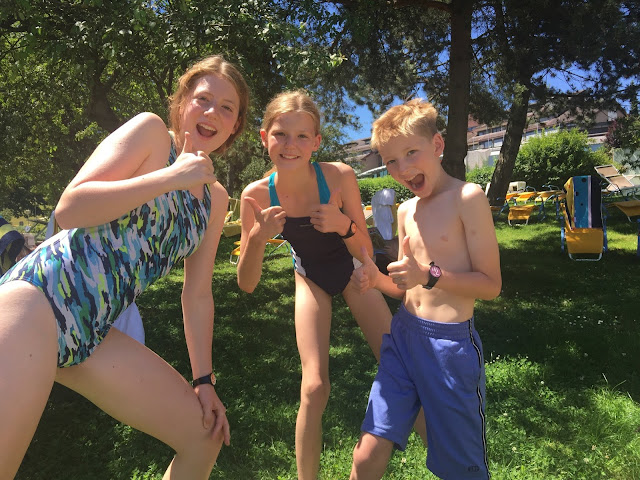 The weather was perfect. Luki gave Finny a beautiful bracelet for her birthday and we even had a lovely lunch in the hotel Luki was staying in. 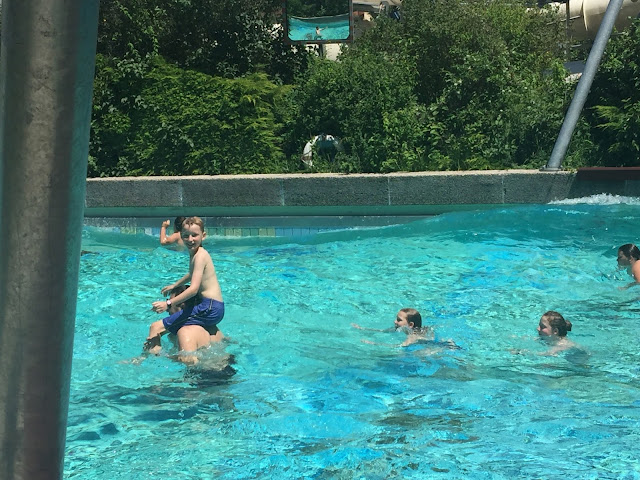 Pictured below is the wild river, a circle of fast moving water...we were in here zipping around when I noticed a little girl clinging the side, holding on for dear life. When we let go and went under, she resurfaced with a look of pure fear on her face. I grabbed her and she clung to me like a baby koala bear...she definitely thought she was going to die!

I got her safely to her grandma (who appeared to have no idea she had suffered a traumatic ordeal) and spent the rest of the day smug in the knowledge that I was a superhero (at least, to one terrified little girl!). 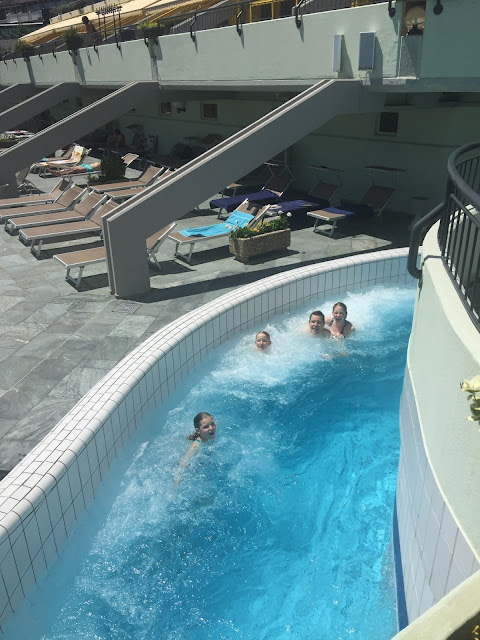 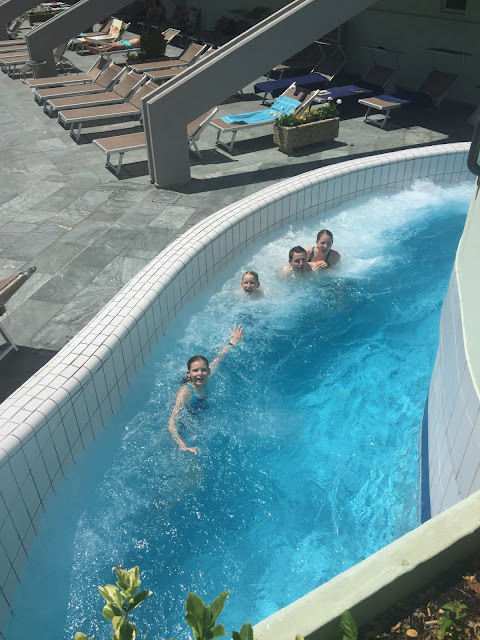 We logged some time in the sunshine and took turns taking the kids for slides and swims. 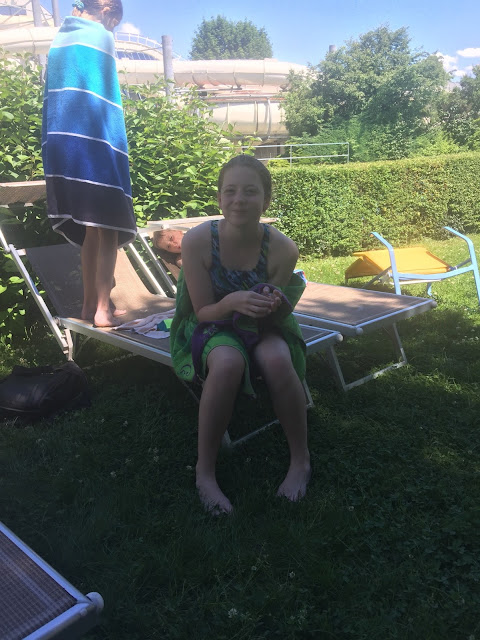 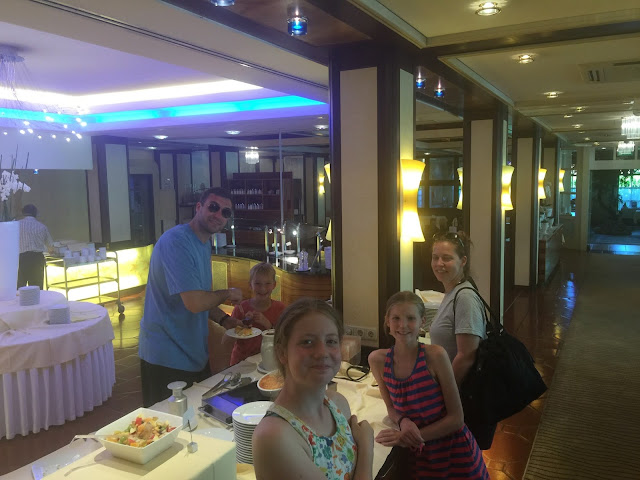 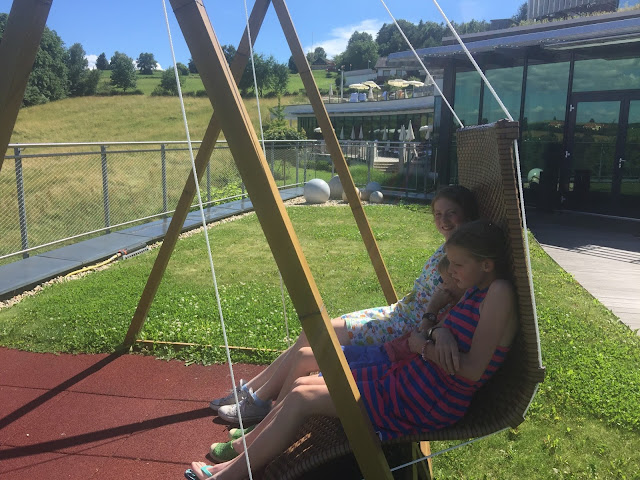 While the sun was blazing, the hot pools weren't too appealing... 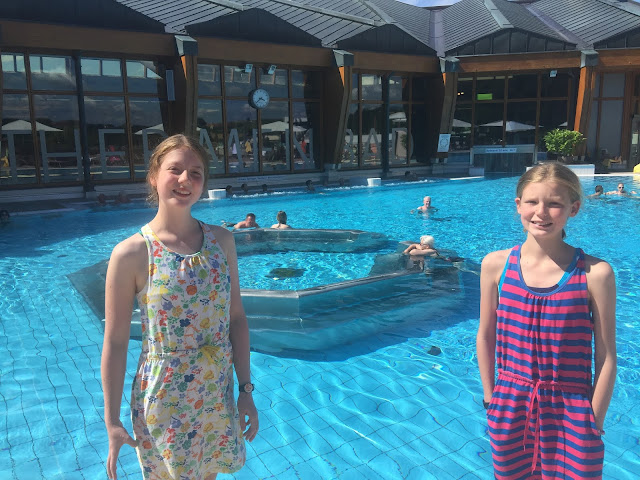 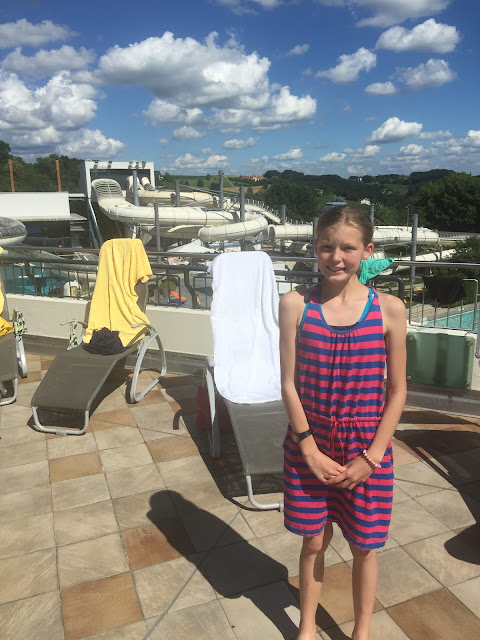 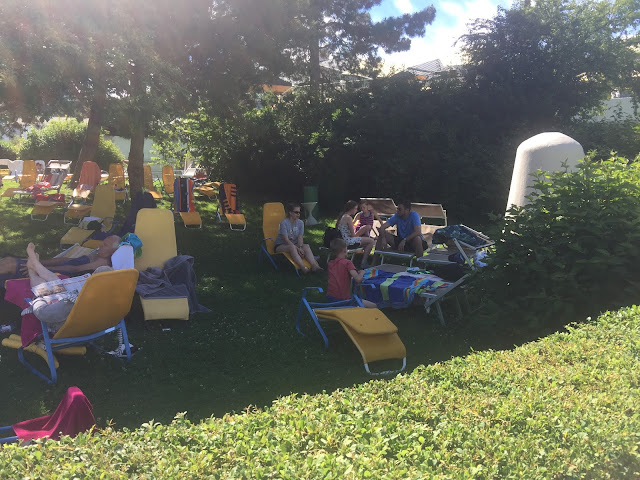 But when the sun started to go down, the warm water was drew us in...there were timed jets on special seats all around the inside and outside pools. With the sun setting, it was spectacular. 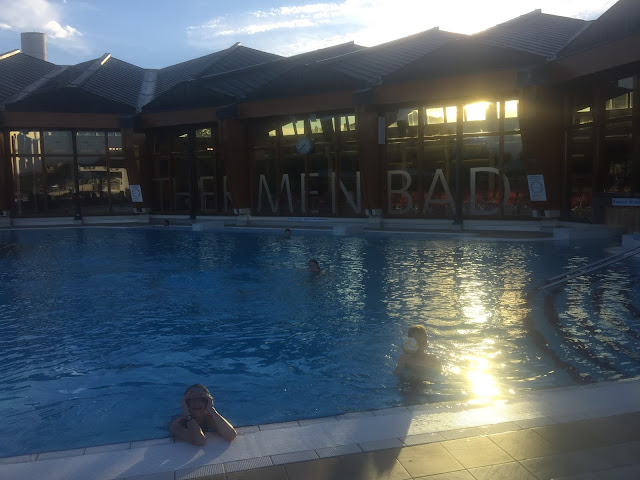 One of my strongest memories of being in these pools when the girls were babies was the torture of getting out at the end of the night. It helped that the temperature of the air was so warm, but it is such a gorgeous pool that it is hard to get out any time of the year.

We finally dragged ourselves down to the showers and got out of our suits. On our way out of the building, there was a huge seating area and beer garden set up for an outdoor screening of the Eurocup games. We grabbed beers and had a snack while we watched the second half of the game. 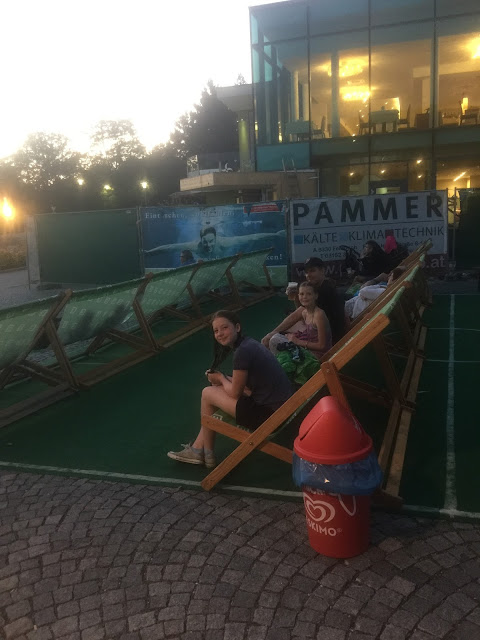 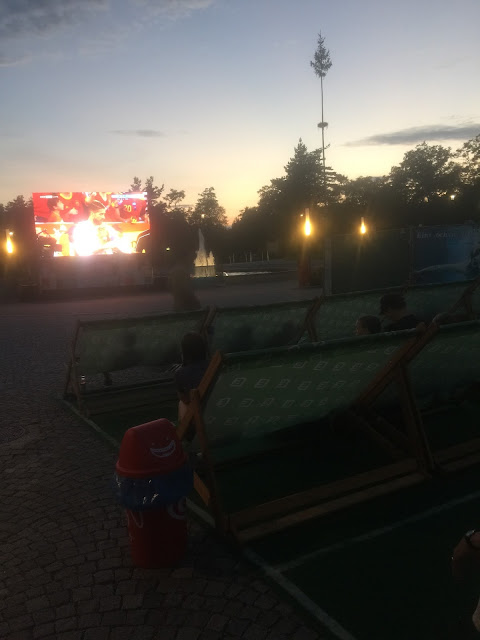 We left late and weren't holding out much hope for finding an ice cream place still open, but birthday luck was on our side...just closing up in the middle of Fürstenfeld was a great gelateria. We all got cones and did one last drive around town. 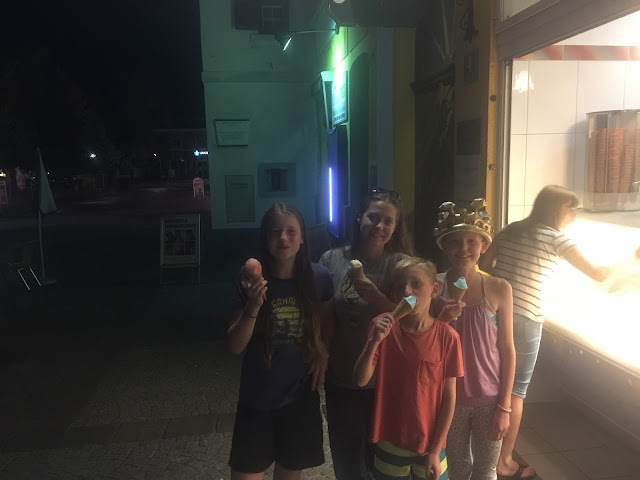 A midnight play at the playground next to the gym Eric played in...I thought we might so those ice creams come back up... 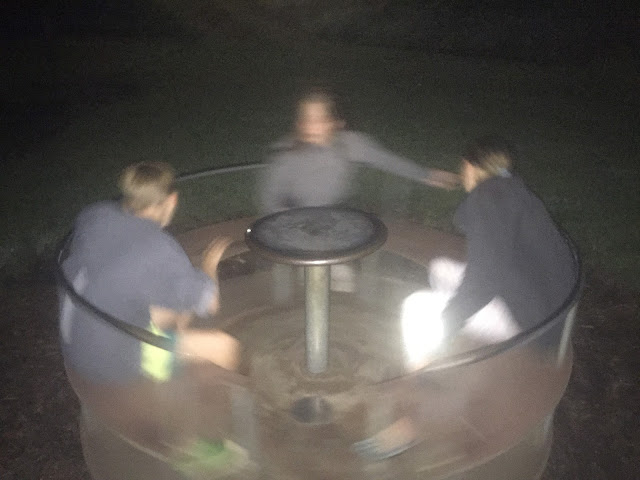 Home to sleep after a great day and a perfect celebration of the start our Finny's 13th year...a day full of life, just like our girl!

As an aside, Finny may be full of life, but Eric was full of cake...Lisi and and Manfred gave us the rest of Finny's cake to keep in our fridge downstairs and I walked in to see Eric scarfing down another midnight snack... 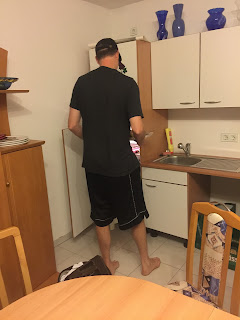 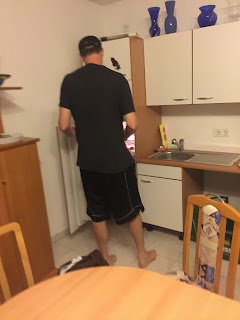 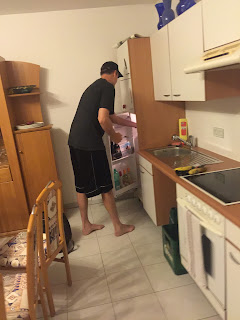 Posted by Ericandles at 3:25 AM