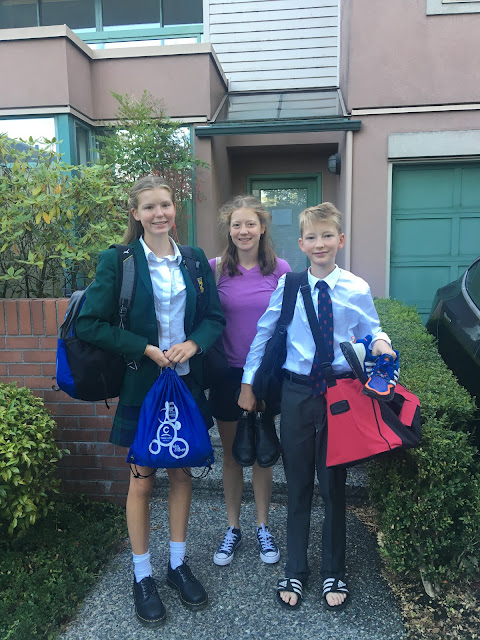 Well, today we all sort of had our bums handed to us on a plate. I don't want this to be a whinge-a-blog but wow, it was a doozy day. This picture was taken bright and early. Sleepy eyes on all. Lukey minus basically all the things he needed for the day. He realized half way to school that he had no timetable with him. No worries, I had a picture so he could write it down.  Except he had no paper. Or pens. Or pencils. So that’s alright. He borrowed from his sisters. Which is when he realized he had assembly. But no blazer. Or lunch. But he did have his rugby stuff, so...woohoo!

I won’t bore us with details, but Molly’s timetable is a nightmare (but she’s a gem!) and Finny’s volleyball is a gong show. Eric and I had a highly mediocre work day. BUT Lukey came home starving (no food all day...I dropped off supplies and food but he never got it!) and super happy. He had a great day. Glowing about teachers and talking about new friends and nicknames. It’s a mini miracle to have him so positive with that rough start and an empty stomach!

Onward. Tomorrow will be better. It has to be!!!
Posted by Ericandles at 11:01 PM