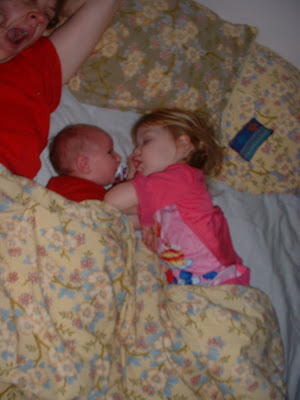 Well, maybe exhausting isn't really a fair description. Although, it would be fair to say that I would love to crop my disgusting, yawning face out of that cute shot of Lucas and Finny. This newborn little guy (yikes, one month old tomorrow!) is making life pretty easy on us. Having said that, I am typing while holding him on my shoulder and periodically patting his back to get rid of his hiccoughs, so it's all relative. Never exactly the fastest typer, this is a definite speed-killer. Oh, and Finny is yanking my hair, standing behind me in my chair. But, sleep has been plentiful. We woke up this morning at almost 11:00. Lucas and I were the last to face the day, the two of us peacefully cuddled in a warm bed.

Yesterday, we showed our German friends, the Dorners, around downtown a little bit, then toured Stanley Park, which has only just reopened after the catastrophic wind storm that toppled what appears to be half the trees in the park. Prospect Point looks like a clear cut. Even though the whole "windstorm of the century" thing has been covered pretty much non-stop in the media, I was shocked by how wrecked the park landscape is.

After touring the disaster-zone, we headed to our friend Steve's house to watch the Phoenix Suns game and then the Canucks game. He has a pimping entertainment centre there...huge plasma HDTV, fancy cable box that gets 19,000,000 channels and surround sound. Makes our dinky arrangement seem pretty much like a prehistoric system of entertainment...our wee little old-school tube television. We can hangout here and more or less watch a candle burn in the darkness or head to Steve's and be dazzled by a fantastic display of technological wizardry. The candle is sooooo pretty.

Tomorrow we are off to Whistler for the night with the Germans. Should be nice as I haven't been there for a while.
Posted by Ericandles at 1:22 PM