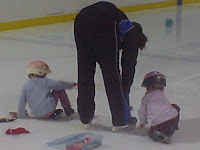 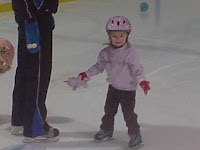 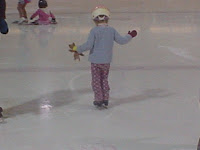 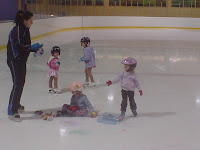 And so it begins...the endless parade of taxi-ing children to programs, lessons, activities and courses. The two girls started skating lessons this morning. Shockingly, they were really good. I was fully prepared for a scene very much like the part in Bambi when the deer hits the ice. Instead, they were not bad. Not bad at all. Tellingly however, the highlight for both of them was not the feeling of confidence they had or the thrill of obtaining competence at a new skill. It was overwhelmingly the procurement of butterfly stickers stuck on their (bike) helmets at the end of the lesson. Making gingerbread men was a close second place, which consisted of lying on the ice and being traced around with a brown felt marker. Pretty passive activity there, what with not moving at all. Probably teaches "oneness" with the ice or something. Well, whatever. They liked it.

Eric and I went to Body Worlds 3 at Science World yesterday. Rather than terrify the girls, we left them with Eric's mom and hoped that Lucas wouldn't be too scarred by the fact that he spent an entire afternoon, out of only 38 afternoons in his entire life, looking at plastinated human bodies, sliced apart and contorted into gruesome/artistic poses. Maybe he'll be a doctor...or a serial murderer...? Hmmmm.

We really enjoyed the exhibition. It was well done and very thought-provoking. Plus, a little voyeuristic and creepy. What's not to love?
Posted by Ericandles at 8:46 PM

That is so exciting! Of course they're naturals. In no time they'll be doing double salchows for butterfly stickers.