The pink backpack strap, the serious facial expression, the jaunty angle of the Elmo hat. I mean, what can I say...? It's a secure man who can converse with his daughter's kindergarten teacher looking like that. 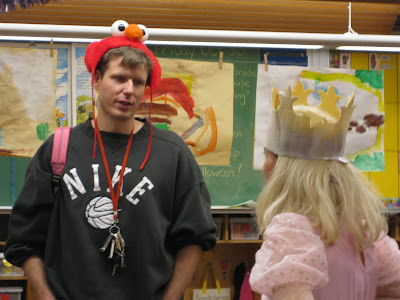 Molly and her best friend Maya: 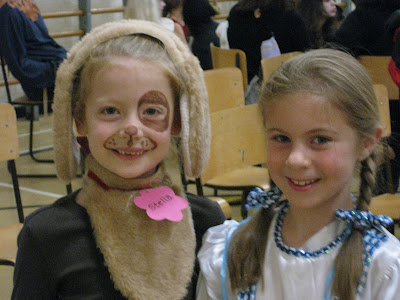 Finny and her buddy Sam: 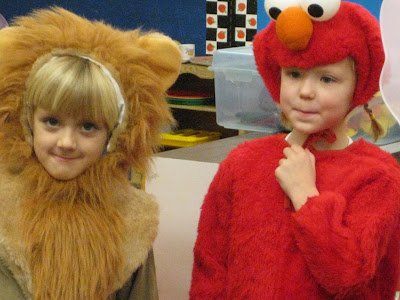 Thanks for the pictures, Mielle!
Posted by Ericandles at 11:04 PM No comments:

Meet you in the boardroom in five minutes...

Right now I am in "my office" (my bedroom...), trying to get some work done before we go away for a bit of a holiday. Things are crazy because I have a couple of writing deadlines I need to hit, plus packing to go, plus Halloween madness, plus...plus...plus...

I feel like I am often sneaking away for some peace and quiet, putting the kids off a bit with promises of, "just a minute" and "give me five minutes" or "I'm heading out for a little meeting, see you in a bit"...

Just now I heard a knock on my bedroom...sorry, I mean office...door. It was Lukey. He wanted in. He said he needed to see me. I told him I was working I'd "be down in a little bit"...a common refrain.

There was a pause on the other side of the door. Then, in an official voice, he said, "I need a meeting. I have to have a meeting with you". Ha! Of course I let him in. Sneaky little turkey.

Update: He brought in a stool, laid a blanket on top, stepped on and declared it was a "meeting about stores and forts...!" No idea what that means. I don't think I got the agenda for this meeting.
Posted by Ericandles at 1:41 PM 3 comments:

It's been one of those long afternoons. The kids are on each others' nerves, but somehow, no matter how many times I split them up, they keep ending up in the same room, usually in a dog pile. It's the noise that gets me in the witching hour. One decibel over a certain threshold and I lose it. (Don't even ask me how I felt yesterday when I suspected a secret poop had taken place courtesy of Lucas. I opened the door to reveal the nasty truth...at the same time as the door spread the offending [soft] turd across the ENTIRE floor...grrr)

We are all kicking around our little townhouse, all a bit on edge. I hear Lukey in the fridge and something crashes out onto the floor. My teeth clench. I don't think I can hear him close the door. What the...? He trots in the room with a yogurt and starts to open it on the carpet. C'MON! I grab it out of his hands and walk back to the kitchen where all the stuff that fell out of the fridge is on the floor, with the fridge open. I launch into lecture mode: "Lucas, you cannot...blah, blah, blah...plus, you didn't even ask if you could have yogurt and we're about to have dinner." He looks at me (with some disdain) and says, "Can I have a yogurt?" Blood pressure rises. I spit out, "You are missing the most important word in that question, Lucas!"

I laughed. Things have been pretty good since then.
Posted by Ericandles at 6:08 PM No comments:

A lemon or "the best ever"?

Working in the "pool", where I can be asked to work outside my regular shift in exchange for days off at another time, has its good and bad points. The uncertainty of when and where I am working is the worst part. Getting to work with lots of different crews and at different halls is one of the better parts. Having an extra week added on to the end of my holidays is the best. However, it means right now I am working a lot, 11 shifts in the last 12 days.

With Les putting in extra hours to meet deadlines, life has been as busy as ever. Of course it hasn't stopped us trying to fit even more into the crammed schedule. Mike, Kate, Steve and Kathy came down for a night playing our newest video game, Rockband Beatles. Les and I had a night out for dinner at Primos before seeing "Black Comedy" at the Stanley. Then, to make life a little more complicated, I decided to pursue buying a van I had been looking at just outside of Seattle. Using a Craigslist monitor that alerted me every time a VW Weekender came available anywhere within one thousand miles, I came across a van I liked at the right price. However, with almost 200,000 miles driven, it was important to try to figure out whether there were any major issues with the van. Thankfully, Bryan McKnight volunteered to come down with me and was extremely helpful in making my decision, getting a good deal and figuring out how to handle all the details of the sale properly.

Even with the deal done though, there were lots of issues to deal with bringing the van back to Canada. There was US and Canadian customs issues, inspections, taxes, duties and insurance. I managed to get through all of this fairly painlessly but needed to get day time running lights installed. Balking at the $250 to do it in the shop, I got a tutorial on the free, thirty second version.

The van is now home and the kids love it. When I showed them the pop top roof and the pull out bed, they shrieked with excitement. "That's the coolest car ever." I'm not sure about that, but if it survives our trip down to San Diego and back without any problems, I will be very happy as well.

These pictures are from our trip to UBC for Finny's first birthday party by herself. We dropped her off at the gymnastics studio and went to the aquatic centre and student union building.

Later on, when Finny was back with us, we went for a swim and to the gym. Finny, who hasn't shown any great inclination to sport, showed her first sign of putting her mind to it. For some reason she decided she wanted to shoot the mini ball we had at the hoop. She shot over and over again until I eventually told her we needed to go. Even though she was heaving the ball, mostly nowhere near the rim, she was determined to keep shooting as long as she could. She is a determined little girl! 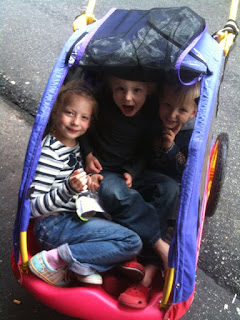 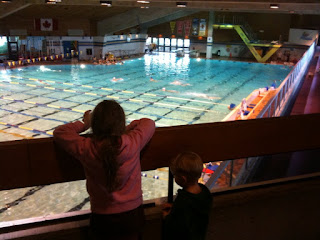 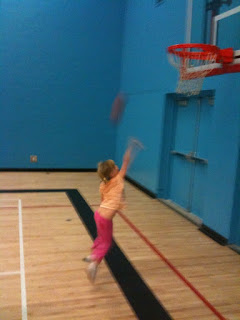 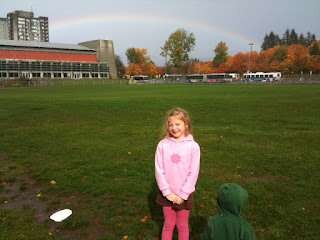 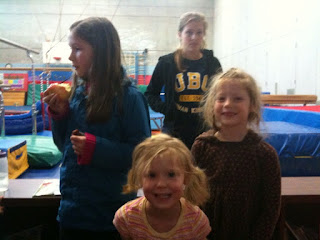 Today was Molly's 7th birthday party. We took 9 kids to see "Cloudy with a Chance of Meatballs". Eight girls and one boy came over to our house before the movie for cake and after school snacks. 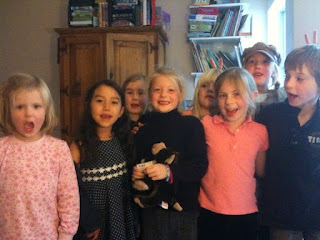 Then we all took the Canada Line to Oakridge for the movie. 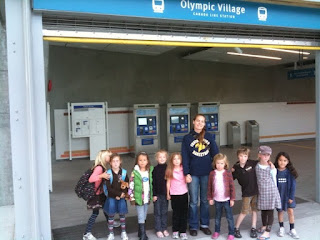 You know, as an aside, I have been hearing a lot about the efforts in place to increase ridership on the Canada Line...um, guys...? Stop pushing it...I think it's caught on. The thing was packed. Like Tokyo rush hour kinda busy.

Try herding nine kids hopped up on cake icing into a space crammed with cranky commuters. It was a stark visual representation of the difference between kids and grown ups:

KIDS: Squeal with delight at the slightest nudge of the train. There was much swaying, leaning and stumbling with the movement of the train car. All accompanied by giggling. Everyone was hugging and holding on to one another with mock desperate fear...hands were held and waists encircled. Best friends were supporting best friends. At one point, I was touching EIGHT kids at the same time.

GROWN UPS: Scowling at kids (to be fair, there were also some very nice commuters, obviously amused by the dramatics of the kids...).

Given the choice, I would opt for kid-ness. Giggling beats scowling anytime. 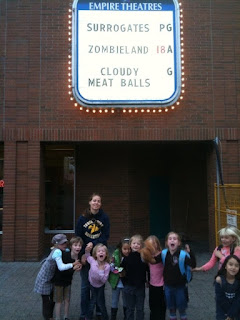 Anyway, the kids took up almost a whole row in the movie theatre. I sat for the most of the movie in the row behind. When the lights went down, all I could hear was whispering and chomping popcorn. Then the movie started and the laughing began. It was a very funny movie, so there was lots of laughter. But that wasn't what I noticed. No, what I heard was something else. Every time I laughed out loud at something sort of quirky, there was another little laugher. It was Molly, sitting a row ahead and five or six seats over. It happened so many times and for a few of them, it was only me and her who laughed. It was this lovely, carefree sound. She has a loud laugh, clearly audible over her friends. It struck me that we were echoing each other. In the dark, her profile looked familiar...it looked a lot like mine. She was ME, but sitting some distance away. 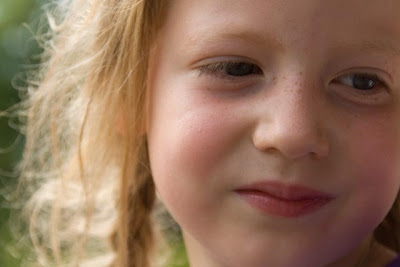 Maybe it is that she is seven now. She is more herself as she develops, but also more recognizable to me because she is at an age now that I clearly remember myself. She is different from me in myriad ways. She's gentler, sweeter natured, dreamier, to name a few. Her heart is a swollen version of my own. I envy it sometimes, but I also fear it's vulnerability. The differences are obvious, but the similarities are clear as well. That laugh in the dark at the movies, when no one else was laughing. No one except me.
Posted by Ericandles at 10:05 PM 3 comments: 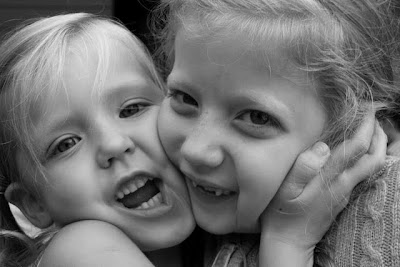 The girls have worked out an interesting way to express sibling affection: mutual library gratification. Molly started the trend by bringing home books for Lucas, but now library days at school are almost competitive in their demonstrations of generosity. Finny can get out three books at a time and she gets one for herself (Scaredy Squirrel, or one of the dozen books she has put herself on the wait list for), one for Lucas (pretty much anything with a wheeled vehicle on the cover), one for Molly (Junie B. Jones, Judy Moody...something she can listen to me or Molly read outloud). Molly can get out tons of books and she showers her brother and sister in literary love. She trolls through the boy books seeking out paperbacks about garbage trucks or diggers, hunts through the "little kid" books for Finny faves, and finally, scouts out a few for herself.

I love this. I LOVE THIS. Plus, it's clever of them: they arrive home with their book bags full and we spend hours reading right after school on the kitchen floor. We don't even make it to a chair. They have figured out the way to their mother's heart...library love.
Posted by Ericandles at 10:41 PM No comments: 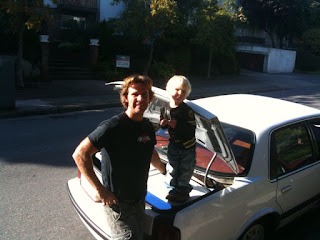 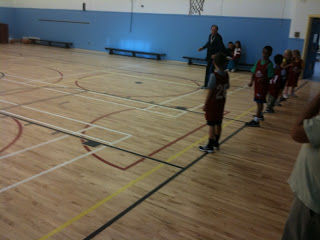 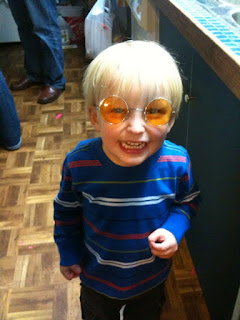 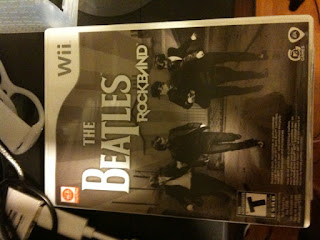 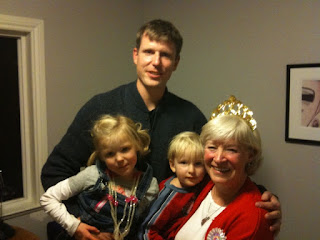 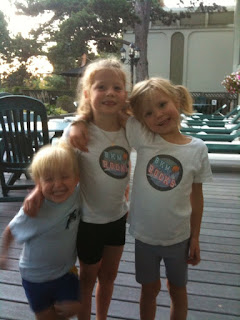 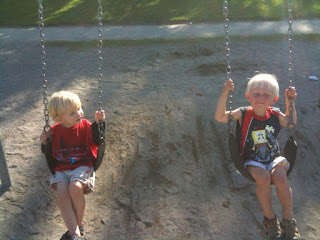 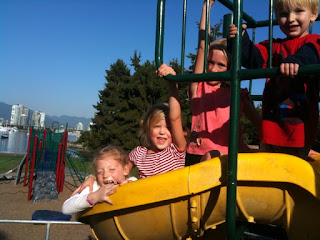 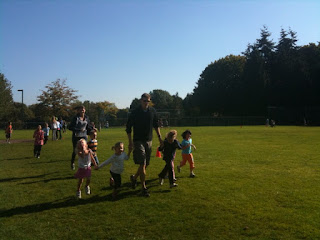 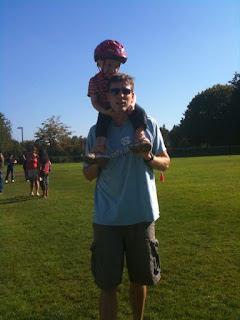