I feel like we are pretty busy most of the time, but you throw December into the mix and the intensity of our activities kick it up a notch. All families are thrown for a scheduling loop in the last month of the year, I think. With things like Secret Santa gift exchanges at school to keep track of, parties etc. to attend and all kinds of year end wrap-ups (plus a few extras we toss in for good measure), we give our Google calendar a work out.

Things got busy right away after Eric and I got home from Hawaii. That weekend, we jumped right back into sports, including helping Finny prepare for her final lifeguarding session, which involved a test (luckily she's already passed the dreaded treading water portion of the course...not buoyant at the best of times, you throw a brick at her to keep up for five minutes as well...and, she tells us she thought she might ACTUALLY die). She passed, as did both her good buddies (Sofie and Mila).  What we found out later was that the fever she spiked two nights earlier was the start of pneumonia (!). She was not to be dissuaded from swimming, but if I had known how sick she was getting, there would have been no celebration milkshake...because there would have been no test at all!


I was lucky enough to get to join Lukey's class on a field trip to the Planetarium in December, too. I was supposed to walk with them from our school, but somehow, while Larissa and I were talking in the school hallway, two whole classes escaped out of a back door (while apparently Alex and Lukey said nothing about their missing mothers). She sprinted after them on the seawall and I lamed out and drove.

We made it, in any case. It was fun hanging out with Lukey's class and I enjoyed the planetarium...in fact, I think I was the most enthusiastic "student" after watching the film at the end of the day there. I learned a ton! It was beautiful and educational. If only it were me that had to head back the classroom and fill a response journal...instead of Lukey, who was a little less excited to do that. He was a little more keen to skip the walk back to school and instead drive with me to Sports Exchange to get a new goalie chest protector as an early birthday present.

Lukey turned 9 on December 4th. Since he has a December birthday, we long ago gave up on friend birthday parties. He has a street hockey party every year in June. Instead, we focus on family. I made him a nice breakfast, then it was off to school. In the evening, we went to my parents' for a rib feast (birthday boy's choice). He opened presents and blew out the candles on this cake:

Lukey was really happy that Uncie and Julie were around for his birthday. That was a great gift, too. 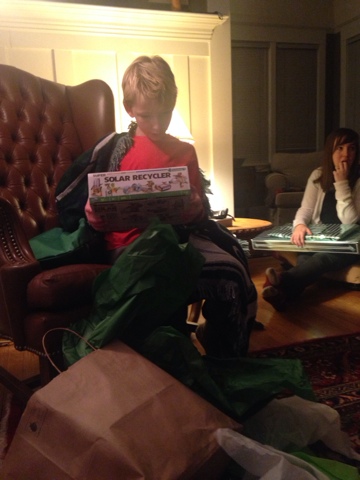 A couple of nights later, we were back at Mum and Dad's for Gingerbread Houses. It's a yearly tradition...at first, we were always at Gord and Margos' in New Westminster. Then last year, we relocated to Will and Janice's. This year, we were even closer to home and instead of sharing a big house between a family, each kid got to move into their own tiny house. 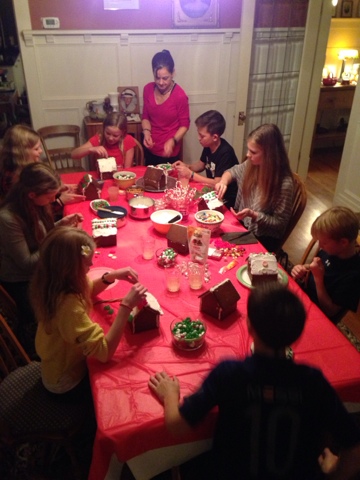 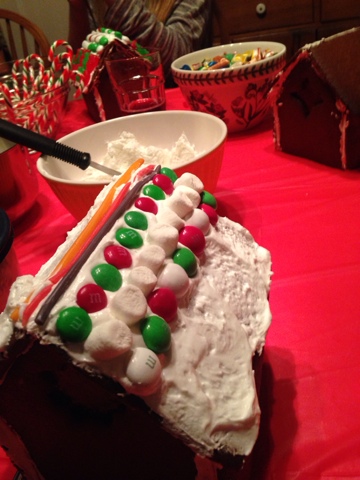 The next day, Winter Pond opened up at the Arbutus Club. The Club is probably Lukey's favourite place in the world on a normal day, but if you add a non-stop open skate, complete with perpetual service of cookies and hot chocolate and add a constant parade of hockey friends, well, we spent a lot of time at Winter Pond. There was ALWAYS someone he knew strapping on their skates. Even the girls got into it this year. 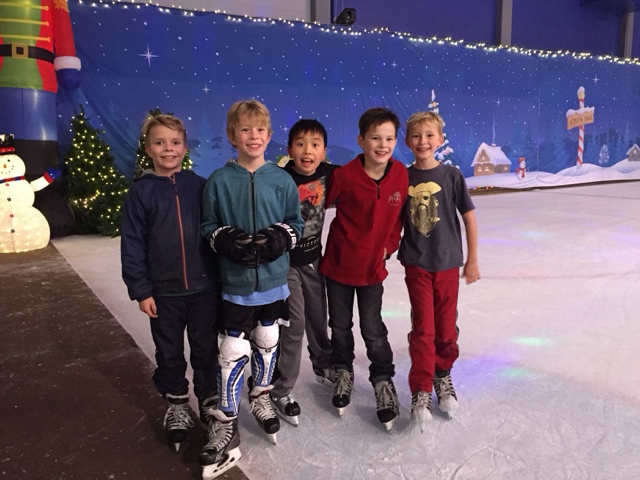 Variations on this motley crew were a permanent fixture on the ice. 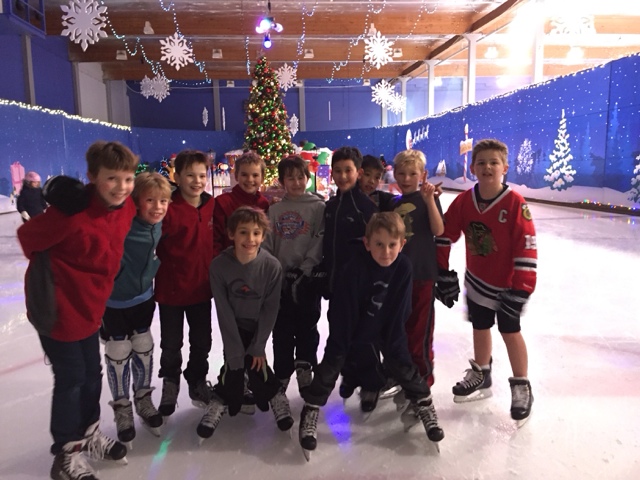 Hockey takes a nice break over Christmas, but before that, Winter Pond bumped the boys from their early morning Wednesday practice on the Mini Rink. So...instead of cancelling, a dry land training session was added at the same insane time in the morning.

All this in preparation for the big Parent/Kid hockey game before school let out.

It was a great game. The kids scored with a couple of seconds left to win 13-12. 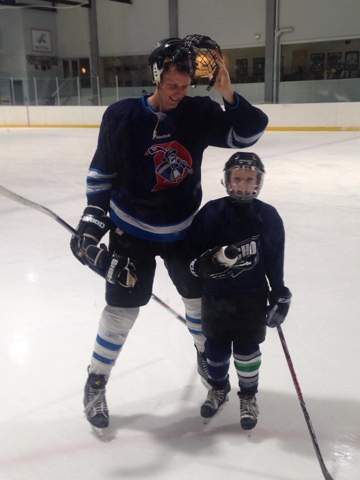 I know it was a bit tough for the parents to know how hard to go against the kids...but by the end of the game, the kids were looking pretty fresh and the adults...were looking a little less so. 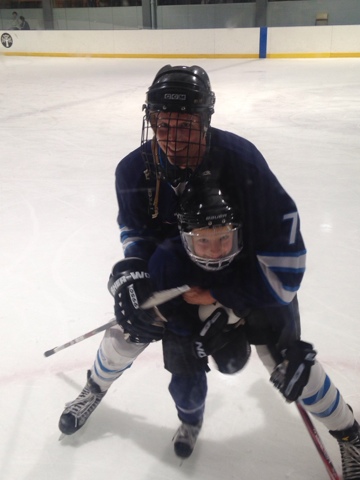 Lukey had a lot of fun playing out instead of in net, for a change. I'm glad the parents didn't get to put 12 past him... 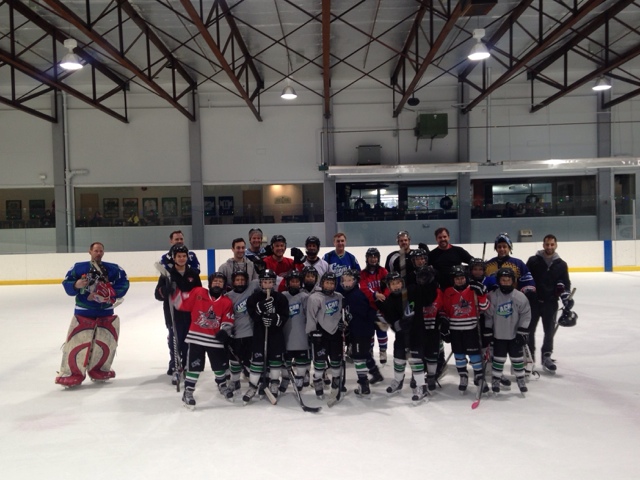 And, since we had a free Sunday (well, at least it was free once the parent/kid game was done), Eric organized a huge 3-on-3 tournament...for about 160 kids. I will let him blog about that. Let's just say it was incredibly fun, but the white board in the middle of the tournament looked like this: 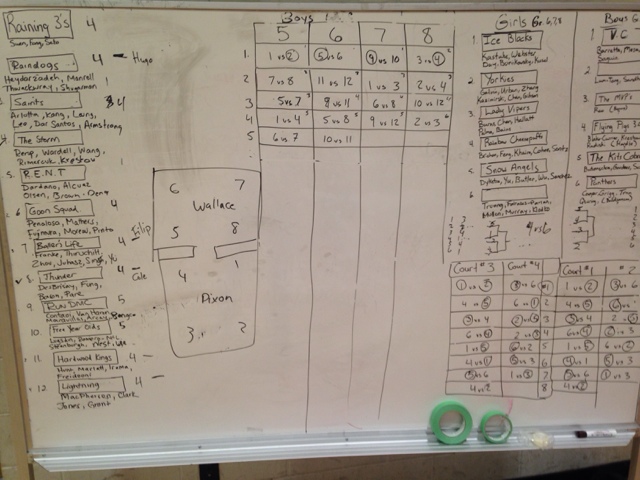 The last week of school finished up with me taking the kids out of school for the firefighters' union Christmas party, another missed afternoon of school to go see the opening day of the new Star Wars movie (a private screening in Richmond) and then more missed school for Molly, who got sick (a rarity for her!). 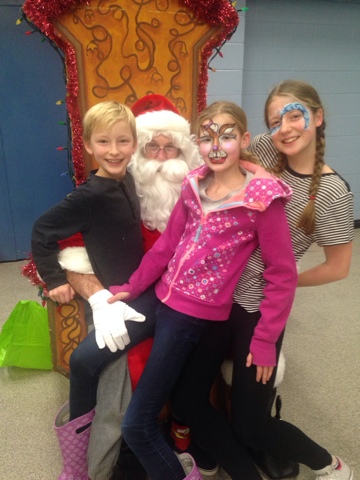 There was more sickness to come...by the time the first weekend after school was upon us, Lukey, Finny, Molly and I were all sick.

Good thing we finally had time to relax! 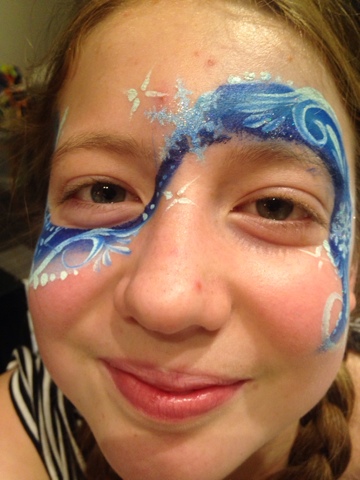 Posted by Ericandles at 10:02 PM No comments: 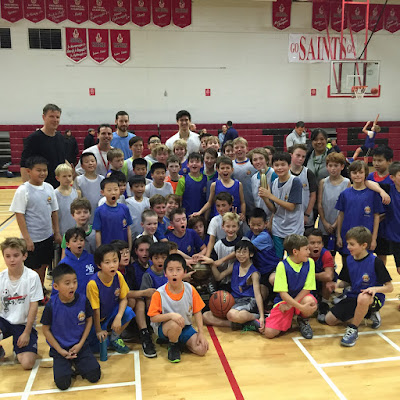 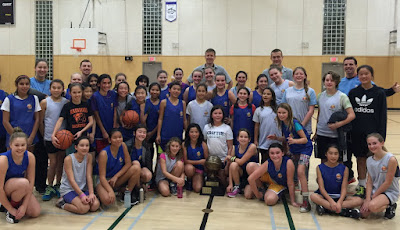 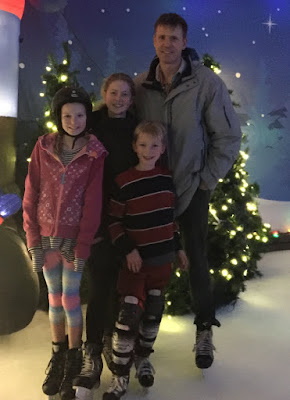 It's pretty much at the top of our kids requests each day this time of year to go for a skate on the Arbutus Club's mini rink.They do a good job of transforming what is a dull rink the rest of the year into a Winter Wonderland of snowmen and Santa's workshop and trees and park benches.

Yes there's unlimited quantities of hot chocolate and cookies....but it still surprises me that this same sheet of ice that holds so little appeal the other 11 months a year becomes this strong a magnet of attraction for the kids.
Posted by Ericandles at 11:00 AM No comments: