It's that time of year that we are thinking a lot about vacations and this brings back memories of the trip Les and I took in June 2000. We set the "fantastic deal" bar so incredibly high that I really doubt that we can top it. At the end of every season in Europe, Les and I would try to go on a trip before heading home to Canada. We managed to see a lot of Europe this way. However, because we would be in the playoffs, we never knew exactly when the season would end and our vacation could begin. This made planning a bit difficult. This particular year my team, the Kapfenberg Bears, lost in the finals. The next day we met with the management and negotiated a deal to stay for the next season. We had 2 weeks to kill before Les flew home from Heathrow and I flew out of Vienna. At 10am the following day, we went to the basement of our building (we lived above a mall and train station)to ask the travel agent if there were any good deals. We were told that there was a 4 star, 2 week, parking and transfers included, all-inclusive roulette (meaning they won't tell you which resort you are actually booked at)leaving at 1:30 pm from Graz for the Turkish coast. However, we barely had time to make the flight (Graz was an hour away)and Les wouldn't make it back in time for her flight to London. We were so disappointed! Then the travel agent informed us that our charter plane would actually be flying home from Turkey to London the day before and it could work perfectly for Les. We were sold. After ten minutes and a couple of T-shirts and shorts were thrown in a bag, we were zooming down the Austrian back roads in our Green Hyundai Atos. 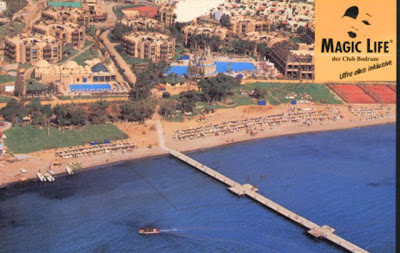 The only disappointment of the trip came early as it seemed like everyone on the plane but us was smoking. From then on we were blown away. We hopped off the plane onto a brand new Mercedes bus. We then drove down to just outside Bodrum where the bus stopped at the famous Austrian resort chain "Magic Life". Still expecting to be dropped off at some shady motel with 4 stars hanging from a dilapidated sign, we were ecstatic when we were whisked away for fruity coctails while our bags were taken to our room. We were told the ground rules before being sent out to explore. "There are 5 restaurants to chose from, a bakery/cafe, 2 night bars and a wine cellar/cave. Alcohol is only served until 2 am. Everything is free, including hair cuts, and no tipping is permitted. There are fishing trips, sailboats, kayak, windsurfing (I thought Les was going to get blown out to Lesbos one day) and water-skiing. 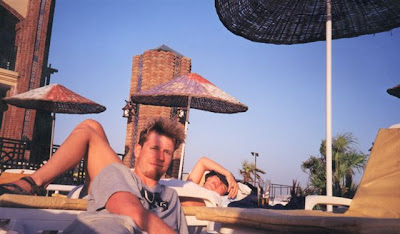 There are 5 pools to use during the day, a waterslide, Turkish sauna and theatre performances each night". We were in heaven. We routinely double fisted our drinks while we played Schnapzen beside the pool. For 2 straight weeks we lounged, read books, played games, swam and had the time of our lives. We only left the compound once, to visit Bodrum and a big water slide park. All of this cost us, including taxes, 6,000 Austrian Shilling (just under $600 Canadian) each. 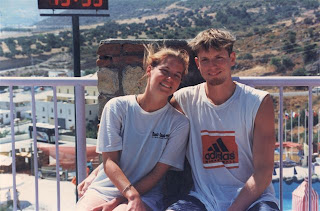 Les flew back to London and I flew back to Graz with 18 hours to kill before going home to Canada. The team decided at this point they would change the agreed upon deal- I said no- so they said see ya! I had half a day to gather everything we had left in our apartment with the assumption we would be returning. Les was having a blissfully ignorant flight home while I packed, cleaned and threw out as much as I could, as quickly as I could. Really it was an event typical of our time in Europe- the best of times and the worst of times- but always very memorable.
Posted by Ericandles at 8:32 PM