E- Another one bites the dust

As is typical of a fire fighting job application process, it has taken me 6 months to get to the end of this one. After starting out with 300 applicants, Richmond had a series of elimination stages (2 physical, 2 mental/aptitude) to get to an interview list of 38 people. Although I had to miss work, spent $400 cash on this process and many extra hours in the gym to be in top shape, I felt lucky to have a chance at this job that many others didn't. The extra $190 that I spent on an interview coach was money well spent as I felt particularly well prepared this time round. Most of the interview was focused on interpersonal skills such as working in teams, conflict resolution and ability to adjust to new environments. I thought my interview went really well. I felt that I was able to clearly articulate most things that make me a strong candidate and demonstrate how my past experience is relevant to the job I am applying for. The fact that I lived for 8 years in a country where I didn't speak the native language and am currently responding to emergencies at work for people who speak not a word of English, were particularly strong examples for me to draw on in a city like Richmond.

The bottom line however is that I got a letter yesterday saying No. I pretty much already knew this because some candidates were phoned the day after their interview, while the process was still ongoing, to inform them of a job offer. My interview coach, who also helped 6 other candidates, was able to tell me lots about the type of person they did hire. Let's just say my problem wasn't being under qualified. Several of the candidates had practically no experience and some apparently don't even have the minimum qualifications. These official hiring guidelines from Richmond clearly show that racism and sexism are perfectly acceptable in our society today as long as they discriminates against the right people. Yes I am frustrated and angry that I have no power to do anything about it. However, I also know that there were some positions available for white males and I didn't get one. Why? 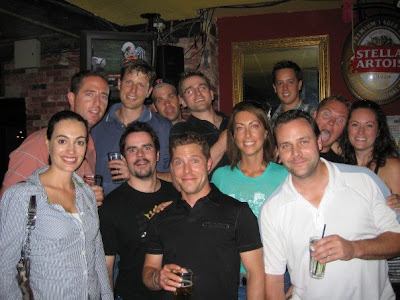 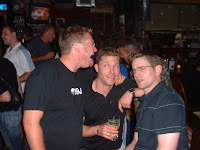 There was a good distraction for me after work however, with a bunch of high school friends all coming into town at the same time. Jay and Paula are back in town for a Vancouver celebration of their Australian wedding. I saw Mark Wallbridge for the second time in a decade when he, Steve, Jay and I took advantage of the city strike to get a free round of pitch and putt on a fairly rough Queen 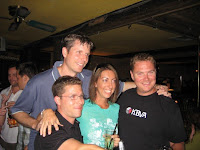 Elizabeth course. The next night everybody was out again with a notable appearance by Drew MacKay and Kevin Flannagan, neither of whom I had seen in 15 years. Looking at the picture I would say we are all doing pretty well, at least in the hair department. I wonder whether the fate of my hair line is determined by genetics or by how many more of these hiring processes I need to go through?
Posted by Ericandles at 6:41 AM