I am not sure if keeping my fingers crossed helped or not. I guess it depends whether I see the glass as half empty or half full. We had to call a tow truck today but didn’t end up using it. 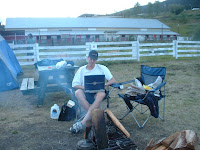 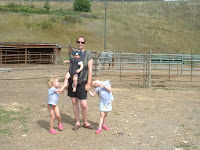 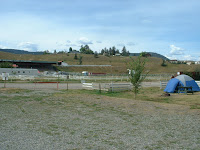 As luck would have it, we ended up camping beside a family from Roberts Creek that had been in the towing business for 30 years. Don helped me fully charge my battery and gave me further confidence that I should be able to make it home with the van running as is. I removed the broken belt, disconnected as much electrical equipment as possible (day time running lights, radio etc) and said a prayer to the van gods.

We decided to spend one day in Williams Lake before hitting the road. It was really hot and we were on foot, confining us to a pretty small radius of Williams Lake. Luckily we were right in the centre and it’s a small town, so we weren’t in bad shape. We walked to a water park where Molly, Fin and I played in the cold water while Les and Luc sat in the shade. 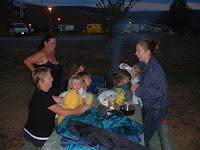 We then got a Slurpee and played on the swings. Taking the long way home to see the centre of town seemed like a good idea at the time, but everybody was pretty tired by the time we got back to our tent. Being the second night at the same camp ground, the girls already had a posse of friends who were glad to seem them back. We ended up serving hot chocolate with marshmallows around the camp fire to 6 kids.

On Monday morning we started the 500 kilometre trip home in beautiful weather. The kids were all great in the car, but Lucas was amazing. It’s the second 7 hour driving day he has put in without a complaint. He just sleeps or happily watches his sisters.

Near the end of our day, just outside of Boston Bar, we decided it was time to refuel. I figured I had covered the possibility of a totally dead battery when I asked the gas station attendant if she had jumper cables. When she said yes, I shut down the van and filled up. Put in the key- turn it to start- NOTHING! Not even an attempt to turn over. Get the jumper cables- hook up- NOTHING! I called the auto club and was told that someone would be along in 2-3 hours. Not having to wait with 3 kids in 30 degree heat was motivating enough to kick up our problem solving skills to another level. After a few practice runs Les and I managed to push the van to a decent speed, where I jumped behind the wheel, put it in 3rd gear and engaged the clutch enough to get our old diesel engine running. Apart from the big, black smoke cloud in Les’ face, we were pretty happy to hear our engine going again. We drove into Bridal falls and got the pimp daddy campground with a heated pool, wireless Internet and workout facility. We even managed to park on a hill! 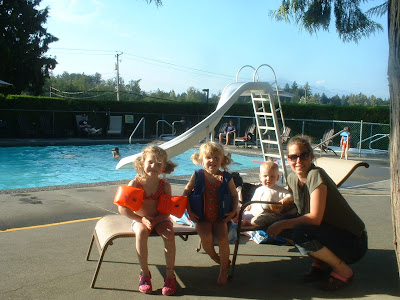