E-The waiting game is over!

One year to the day since Alli passed away, and more than 2 years since I started my first fire fighting course, I finally got the call I have been anxiously awaiting. Actually, I got two.

I figure it's been roughly 800 days since I finished all of the basic qualifications (NFPA 1001, level 3 first aid, class 1 driver's license) I needed to apply to fire departments. In that time I have applied to many places and been through a lot of different processes. Not once however, did I get that phone call telling me I am being offered a job. After periods of disillusionment and a number of disappointments, I never thought I would be in a position where I actually got to choose between two local departments.....it just didn't seem like a realistic possibility.

However, earlier this afternoon (February 28th) I was informed that I would be offered a job with the Vancouver Fire Department. Half an hour later I got a call from the chief of Delta Fire asking me if I would like a job with them. In a matter of minutes, all of the uncertainty of "what next if I don't get hired" vanished and a new responsibility appeared....to decide what department I will be best to spend my career at. Some may wonder how I hadn't figured this out given how long time I have been playing this game. However, the chances of being successful in two processes, and to have them happen at the exact same time, is so remote that I haven't even allowed the thought to really enter my mind. Never the less, I am now in the very fortunate position to be faced with this difficult and important decision.

Vancouver is my home. I like the thought of not having to commute very far to work. It is a big department with lots of different challenges and opportunities for fire fighters.

Delta, on the other hand, is a smaller, more rural department. It has 7 halls to Vancouver's 20 and has about 165 fire fighters. Most of the halls would be between 25 and 45 minutes from our home........but much closer to our place in Point Roberts. In fact, the Point borders Delta and is only a couple minute drive from hall 2.

I was really impressed by the guys I met and could see myself being at home with that group of people. Everybody had great things to say about the department and seemed happy to come to work every day. They seem to be a cohesive group that also does a lot of extra curricular activities together. The department has top notch equipment and seems really well supported by the local community.

Today is a good day, and this is a great "problem" that I never anticipated needing to think about. Here is a picture of Les playing the part: 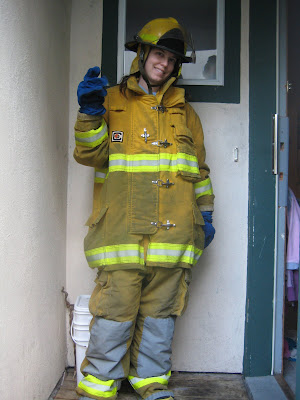 Posted by Ericandles at 8:32 PM

Congratulations Eric. It sounds like whichever you chose you'll have won. What a nice choice to have to make! Ting

YAY! congratulations!! That's awesome news, you must be so happy! I'm loving reading your blog... hopefully we can catch up in person sometime this summer!