Despite the fact that Finny packed a bag to join us (fully packed...underwear, bathing suit, etc.) and Molly made a two month intensive effort to learn French, we left the kids at home and went on holiday to France.

My dad generously offered to drive us to the airport after a series of comical (and not so comical) delays that had us leave town considerably after our estimated departure. Nevertheless, we enjoyed a bit of shopping time and a decadent and delicious meal at The Cheesecake Factory in Seattle before heading to the airport to leave for Newark, New Jersey.

We arrived into Newark at 7 a.m....all ready to take on a day of New York before our 7 pm flight out that evening.

The first complex task we asked of our jet lagged and addled brains was to figure out public transportation in New Jersey. Gulp. Either it sucked, or we sucked. We were tired, but I think the New Jersey train system is also fatigued. We were both sort of hurting.


Thankfully, we had New York to wake us up. Nothing like a full-on assault to the senses to kick a bit of jet lag to the curb.

Two steps outside of the station, we came across a five borough bike tour of thousands and thousands of bikes. Also, a firefighter on his way to work. He was wearing/carrying his turnout gear and had his breakfast in a bag. Eric commented that they would not be allowed to go to work like this...

We walked to Madison Square. We sat down, had a snack and observed some very type-A New York parents having professional family photos taken with their two sons. It was entertaining. For us. Not them.

We walked from there to NYU. It was no longer possible for me to walk past another cute cafe. We had to stop.

I bought us coffee and went down the block to get the Sunday Times. This picture below is my fantasy come true. It. Was. Perfect. 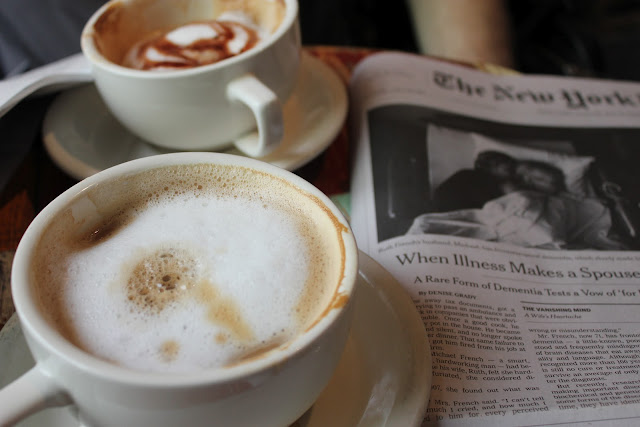 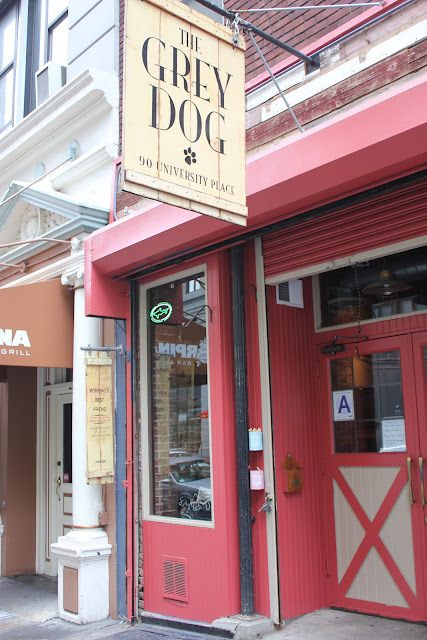 Next stop was Washington Square. This guy was playing a Grand Piano. Loved it. 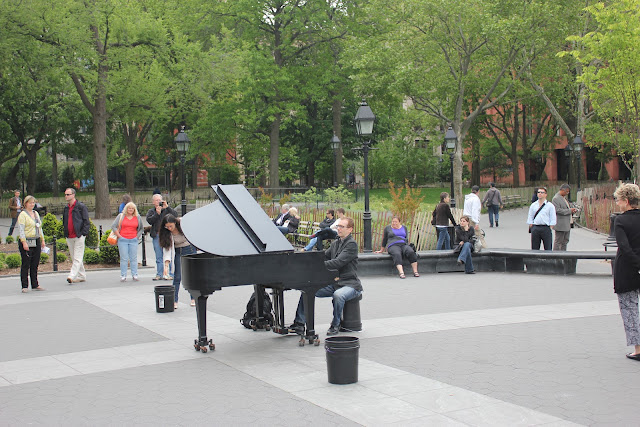 That's around when Eric started to feel a bit faint from lack of sleep, low blood sugar and extreme hunger. My prescription? Pizza.

My treatment worked. Equilibrium was restored with Ray's pizza (as an aside, in my sleepy state, I managed to pay for the pizza, pick it up and then promptly throw it on the floor. Ray got me more. I apologized in a very profuse and Canadian fashion).

Onward to Little Italy. I loved these tomato cans planted with basil. And then, strangely, tomatoes planted in buckets.  We walked to Chinatown and watched some Tai Chi in the park. 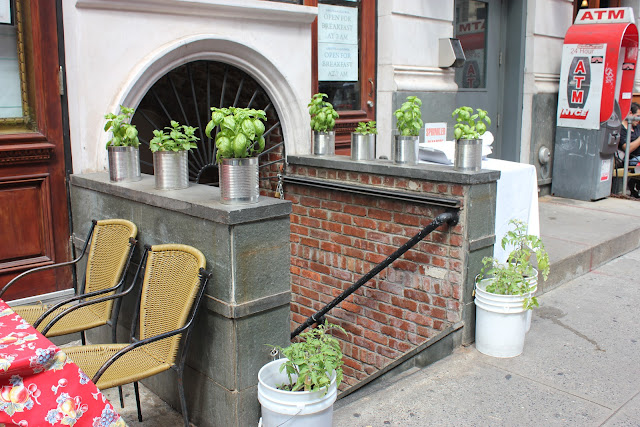 In Greenwich Village, we stopped for beer. It was gorgeous and sunny and the beer was cold and delicious. The super-anal yuppie New York couple having eggs Benny next to us was also entertaining. For us. Not them. 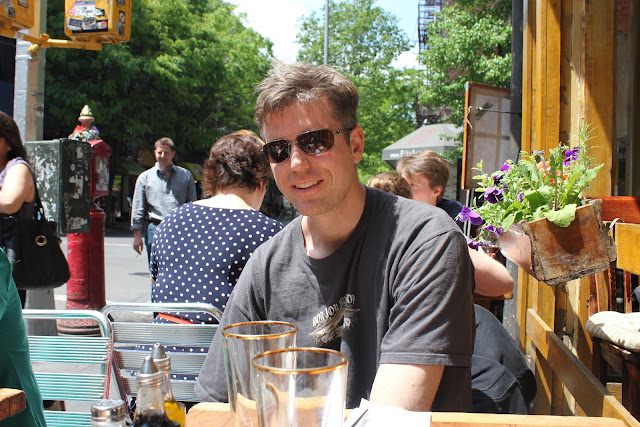 We found this park (which made us miss the kids) filled with very urban kids scootering, biking, playing basketball and baseball. It was a true city scene. We need more space like this in Vancouver, I think. 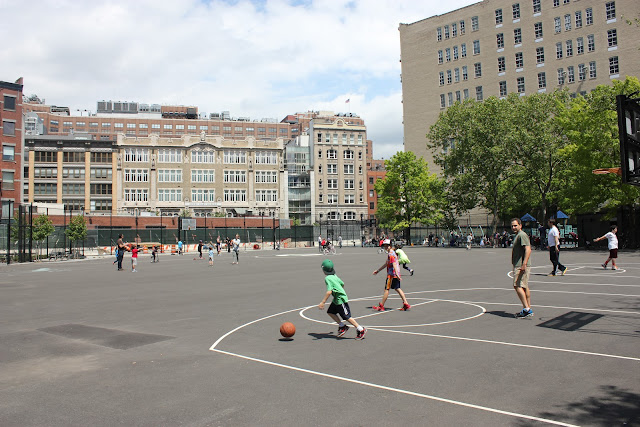 Oh, and what's New York without a modelling shot in the middle of the street. You know, a hot girl in an haute couture dress on the pavement in front of a Lamborghini? Yeah, we saw that. 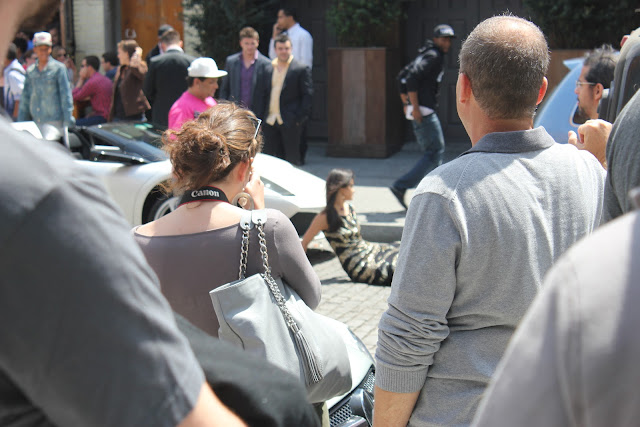 Then, as per Andrew McTaggart's excellent suggestion, we hit the High Line. It is an abandoned elevated train track turned into a park. 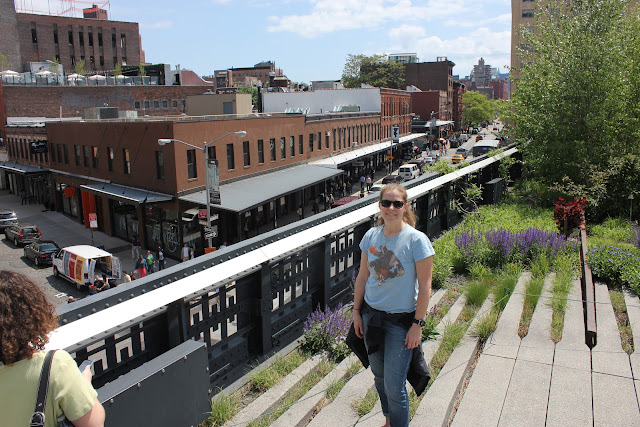 The lookout in the picture below was hanging right over a street. 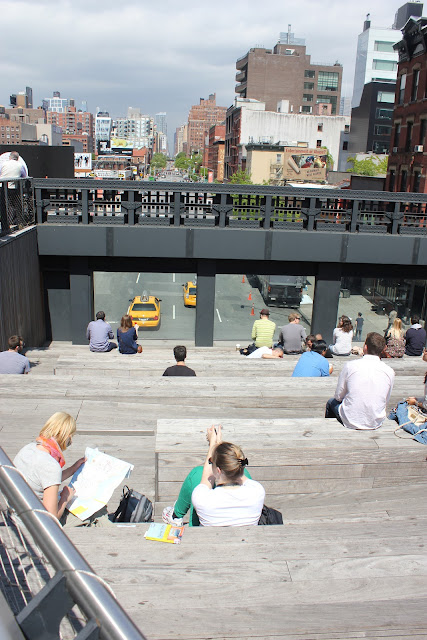 This is the same spot taken from a little further along. I love how this looks. 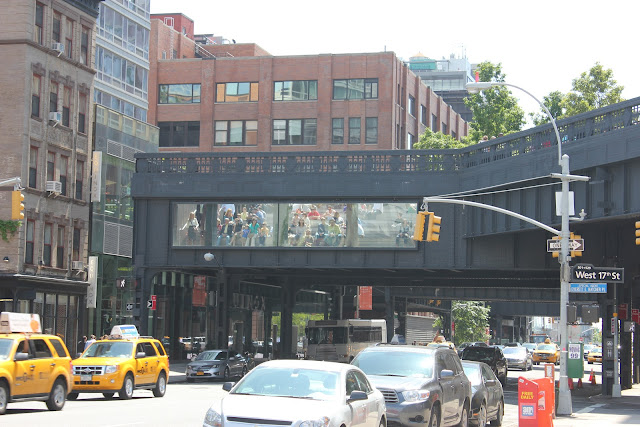 We popped down to the spectacular Chelsea Market. 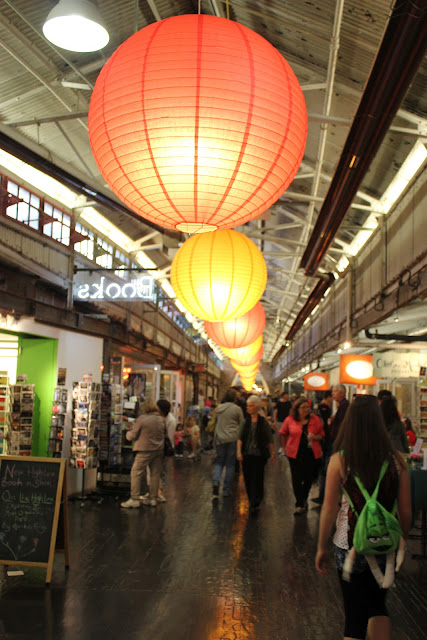 As this clock shows, time was ticking on and we had a flight to catch at 7 pm. We had logged a lot of kilometres on some tuckered out legs. It was time to make our way back towards Penn Station. 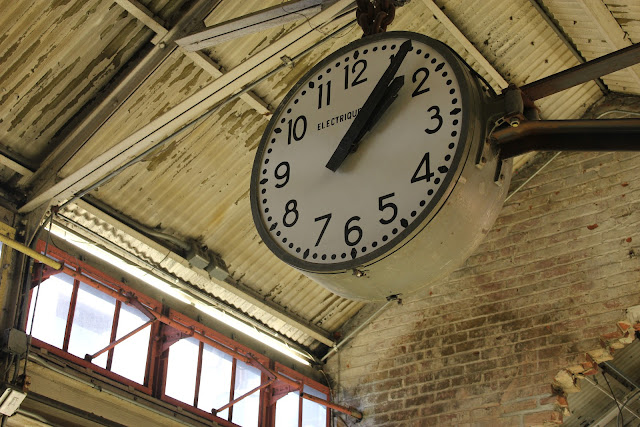 Back up on the High Line, we were hobbling back to the train. 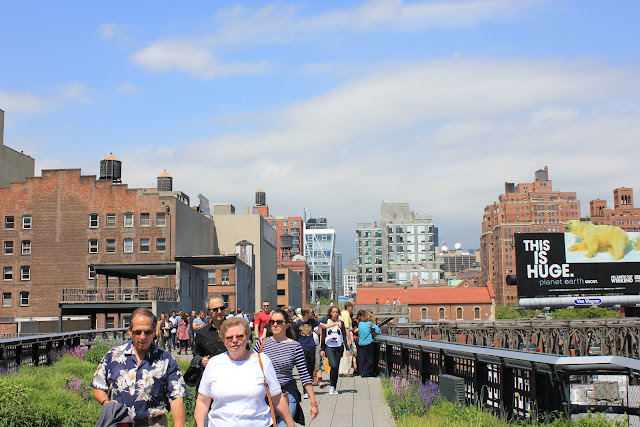 A quick stop at Chipotle for some food (we know, we know, there were better options...but we were tired and...tired). We enjoyed a last bit of sunshine outside of Madison Square Gardens (where we were accosted by a crazy lady named Michelle who had purchased a $17 ticket to the Avengers and whose insistence on shaking both Eric's and my hand resulted in us beelining to a bathroom to wash Michelle away. Ugh.)

Back to the airport for our flight to Barcelona. 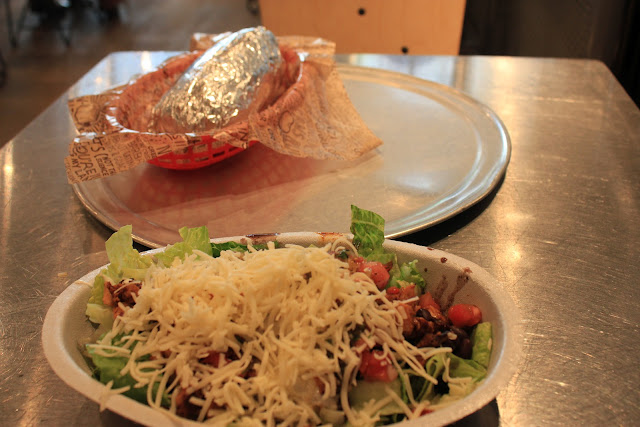 Posted by Ericandles at 4:39 PM