Some great news....(well, it's no longer technically news, having received word and blogging about it a couple of days ago, but it still feels pretty new and exciting)....I have been hired as a fire fighter with Delta Fire and Emergency Services. I received my letter of employment today and will be starting in two weeks. I have given my choice lots of thought and am confident I am making a good decision.

The municipality of Delta includes 364 sq. kilometres of land area south of the Fraser river, north of the 49th parallel (the border with the U.S.) and west of 120th Street (Scott Road). You can see the fire halls by clicking the blue markers. 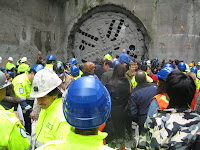 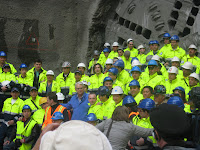 The timing of this job couldn't be better. We broke through on the final section of the tunnel on Sunday. Despite getting the family up, dressed for the cold, finding parking downtown and walking to Waterfront station before 11am, we were about 50 feet away when we heard the air horns and yelling that signalled we were just missing breakthrough. We were there in time however, to witness the emotion of the moment and to say congratulations to all the guys. 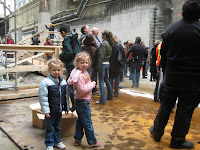 There is about 2 months worth of work left to do, as the site needs some attention and the machine has to be disassembled, packed up, shipped by rail across Canada, boat to St. Petersburg and then by train to Omsk in Siberia. I spent this morning giving an orientation to Yuri. It wasn't the easiest explaining our safety procedures to someone with so little spoken English. However, when he was able to communicate to me that he had never been out of Siberia before, I became pretty impressed that he could understand me at all. 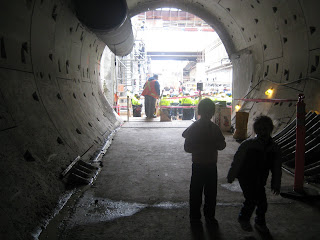 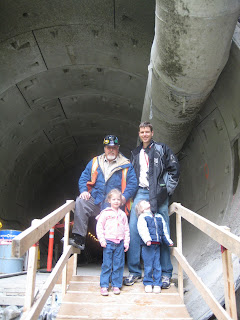 Posted by Ericandles at 7:38 AM

Congrats on your job. We are glad to have you in on the swap. You have a beautiful family. Just wanted to drop by and say hi. I need to come back later and look at the barrettes again. -Meg