E- It really is Saturday today 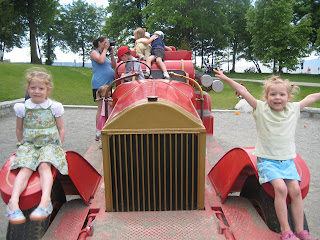 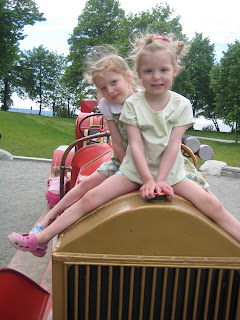 On a beautiful Saturday without much to do, we decided to pack a picnic and take the kids for a ride on the seawall. Now that there is a separate lane for bikers pretty much the whole way around, it is a safe and fun way to travel. Even with a leisurely pace we made it to Second Beach in Stanley park in little over half an hour. There were thousands of people out on the route, at the beaches, in cafes, roller blading, biking and walking. Vancouver, experienced this way, on a day like this, really is one of the most spectacular cities in the world.

We ate our lunch at Stanley Park and the kids played on the playground, fire truck and swings. Lucas, as can be seen in the video, seems to understand the concept of propelling himself on the swing better than either of our girls have so far. (However, I suspect that might be because the girls realize if they play incapable, I will do all the pushing work for them.) 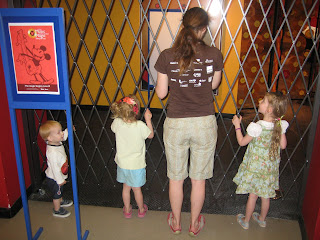 On the way back we stopped at Science World for the new Disney exhibit. I felt a little like the Griswalds at Wally World as we stood at the gate next to the "Opens June 8th" sign but decided it wasn't worth going postal over some Disney propaganda. 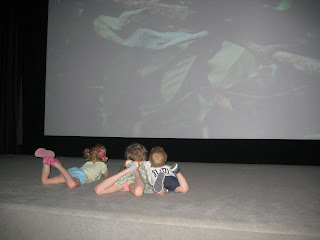 Instead we went to the theater to watch animals killing each other in some nature film, which didn't seem to disturb the kids in the least. I think they were just so happy to have the theater to themselves, meaning they could run up on the front stage and even dance and make shadows from the big screen projector behind them.

As you can see in these pictures, Lucas is right in on the action these days. He wrestles with the girls, even pretends to be things (like a cat, where he will only crawl), or to fall asleep (that one is really cute) and definitely gives it as good as he gets. I put a couple of videos here that show what Luc is like at 18 months old. 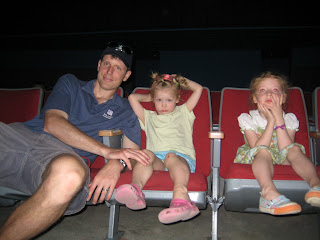 Posted by Ericandles at 8:26 PM

what great pics of the kids!!! They look like they are having a brilliant time!

Thank you for joining in with my russian doll swap, I am so excited. Details will follow shortly....

oh, they would follow - I need your email address!!! email me with your postal address please to katyejones at hotmail dot com