So, it was Bust, actually.

Last Thursday, we packed ourselves up (another marathon session that lasted multiple hours over what we predicted) for a five night trip up to Hornby Island. We planned to motor to Nanaimo on Day 1, then off to Tribune Bay to meet friends who'd rented a cabin there.

We got into Nanaimo late, almost 9:30 pm. We pulled into the Nanaimo Yacht Club for a night of reciprocal moorage, then planned an early morning start to make our way to Hornby. When Eric awoke to start our journey the next day, he checked the engine and saw one of the most dreaded things a boat owner can see: water collected in the primary filter of the fuel tank.

We knew this was a dreaded outcome because we'd already experienced it once up in Desolation Sound last summer. It involved many hours spent by Eric manually pumping out all our diesel, which is a messy and time consuming task. If the water gets into your engine...it stops running. That was something we wanted to avoid. It seemed unwise to head farther from civilization just in case it did happen.

Voila. Weekend in Nanaimo. Unplanned, but serendipitous. It was Bathtub Race weekend and the city was alive with street fairs, outdoor concerts, fireworks and of course, the bathtub race itself.

We moored up on (what we would soon learn was a total party dock) at Newcastle Island, just across the bay from Nanaimo. The kids jumped into bathing suits and dove in for a swim. 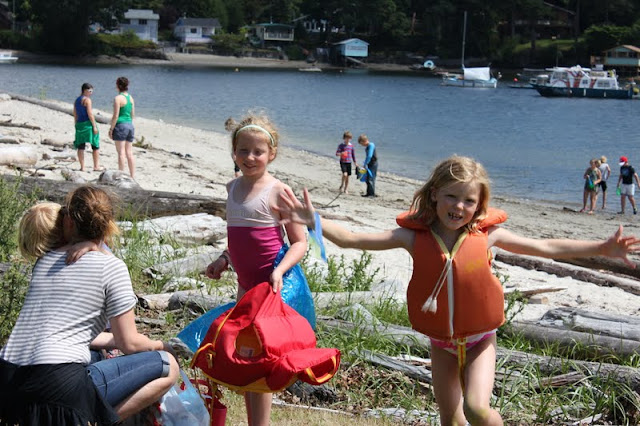 Well, actually, the girls swam (see them in the background below?) while Lukey did stuff with sticks. 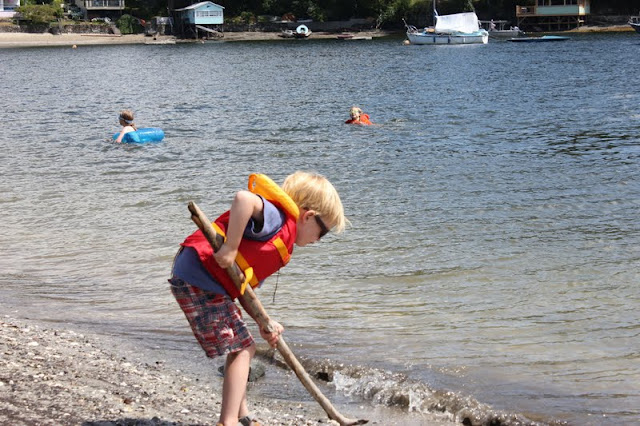 We sat in the sunshine in the gorgeous park on Newcastle and had snacks and read while the kids warmed up from the cold ocean. The last time I was on Newcastle was during a school sailing trip in 1990. Twenty one years later and I was doing the chaperoning. Strange time warp. 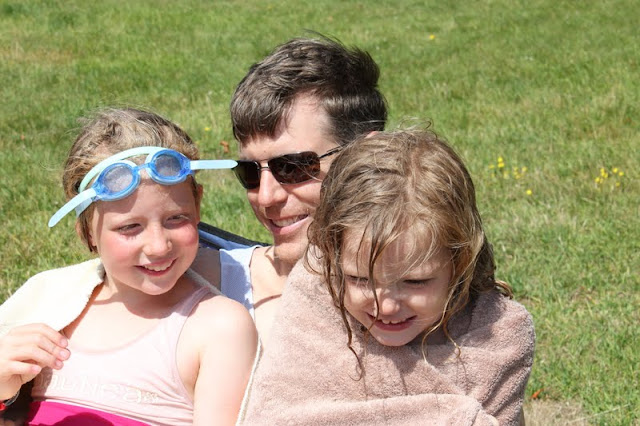 Molly found a stump to sit on in the middle of a field. I thought she looked like the mermaid on the rock in Stanley Park, minus the water. 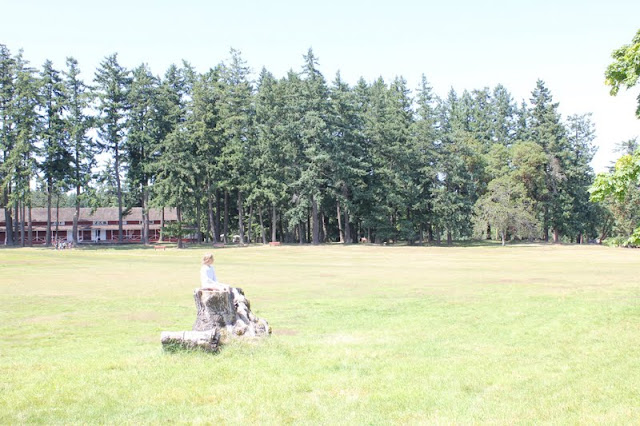 We enjoyed two nights on Newcastle. Bizarrely, we ran into someone we went to high school with tied up a few boats over from us. She is now a Nanaimo dentist. We watched the fireworks from her boat with her husband and two kids. Suddenly, we were immersed in what we learned was the biggest party weekend of the year for Nanaimo-ites. A few Palms Bays and Coronas on their boat and we were a part of the Island scene. Just another Nanaimo family out for the bathtub races.

The picture below is Molly and Finny jumping off the roof of the boat. We were anchored in Departure Bay at the finish line for the race. We could see the tubs come bolting into the beach, then watch as their drivers stumbled up the shore to ring the finish bell. Those things really fly. They are less bathtubs, more thin strips of fibreglass that plane across the water while their occupants huddle against the wind and waves. I admit, I pictured a more romantic image of actual tubs with faucets and bumbling drivers frantically bailing out as their baths sink into the harbour. This was all business. It was more like the boat races I remember seeing as a kid in Florida. 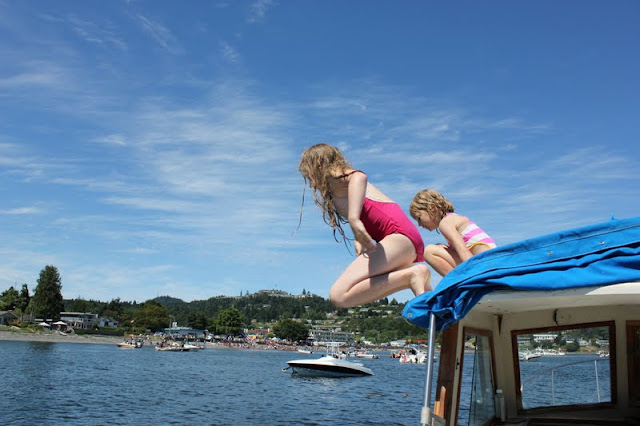 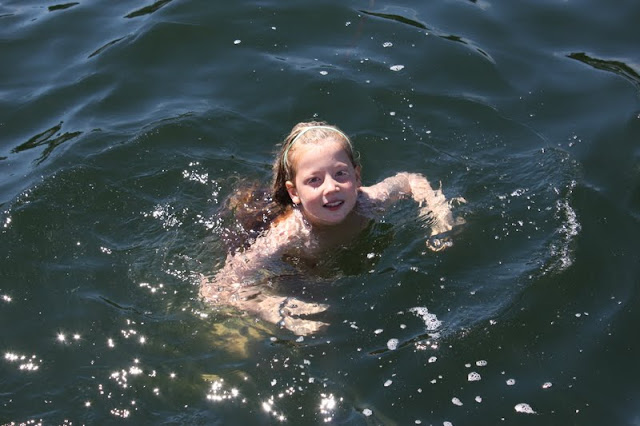 We left Nanaimo on Sunday afternoon and motored to Thetis Island. It was a hot ride and as soon as we spotted this sheltered cove, the kids begged to jump in. It looked so nice, Eric and I joined them. I can't even remember the last time I swam in the ocean in B.C. (it might have been that sailing trip in 1990...no, not really, but close). I choose a good time to break my streak because it was unbelievably warm. 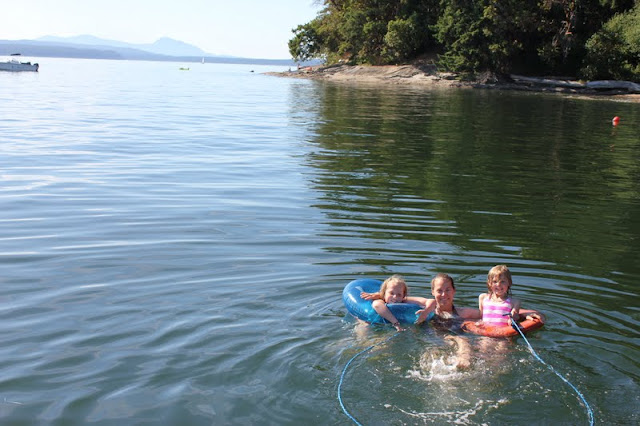 Eric took the kids to the far shore in the dinghy, then swam back with them while Lukey and I manned the dinghy to make sure no one drowned (full disclosure: I was mostly watching out for Eric...he's not the strongest swimmer). 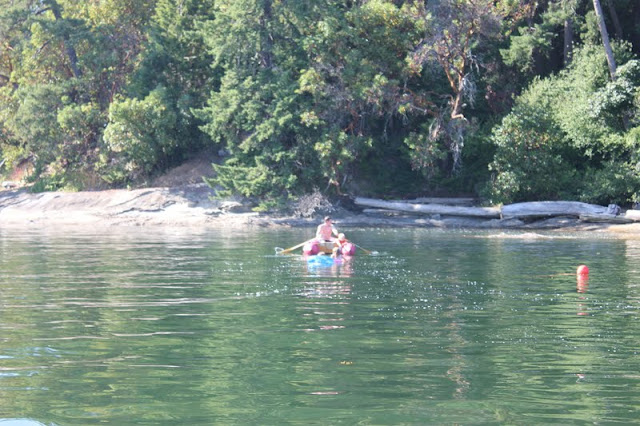 We dried off and motored into Telegraph Cove where we had pizza and cooked dinner at the marina. I learned later that this particular spot is famous for ice cream sundaes...which we missed. We'll just have to make another trip to sample those. 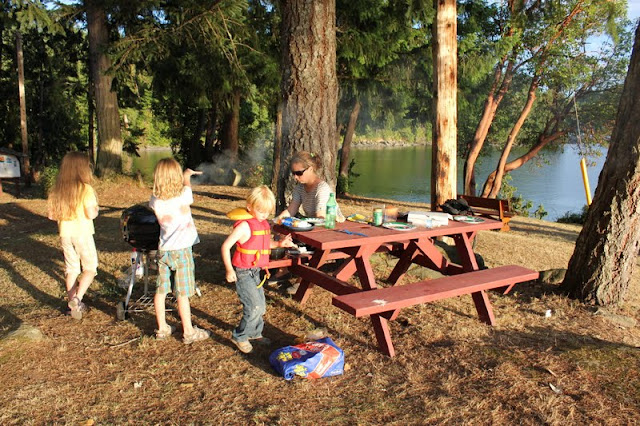 After three failed attempts at anchoring, we moved out of the Cove and managed to stick off the eastern shore for a wavy night. The sunset was spectacular. You can see it in the background of this shot of Finny. 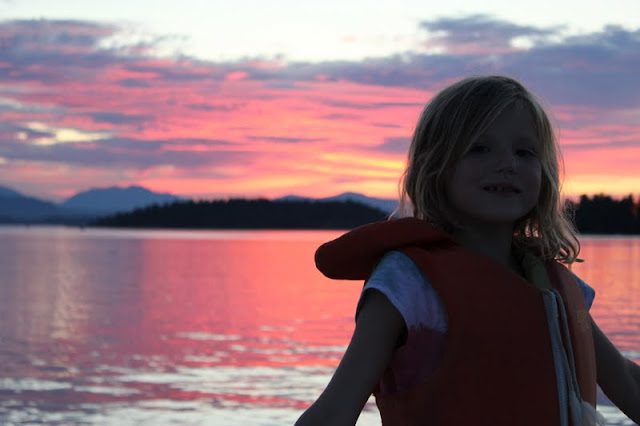 We got up this morning and shot into Chemainus for breakfast. I think they went to the Leavenworth, Washington school of downtown revitalization. Pick a theme (in this case, it's murals) and go to town. We actually had to pay to tie up at the municipal dock for a couple of hours. The place was crawling with tourists on a Monday. 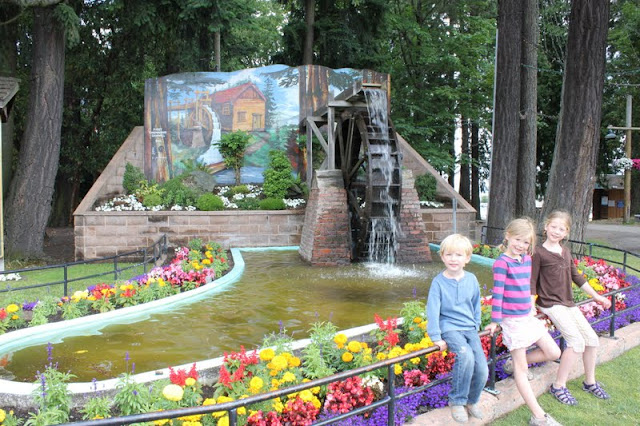 Tonight we are tied up at Poet's Cove on Pender Island. It is a dream destination for a boating family. We spent three hours this evening in the heated (seriously, we guess it was around 80 degrees) pool. It is an absolutely fantastic location. I even ordered fish and chips for dinner from the bistro for a treat. It was supposed to be my treat, because no one else in my family likes fish and chips. Except that as soon as it arrived, the two pickiest kids were all about it. They were diving in like it was their favourite thing in the world. They polished off most of it, meanwhile I know for 100% certain that I were ever to MAKE fish for them there's no way they would ever permit the tiniest crumb to pass their disgusted little lips. Geez. 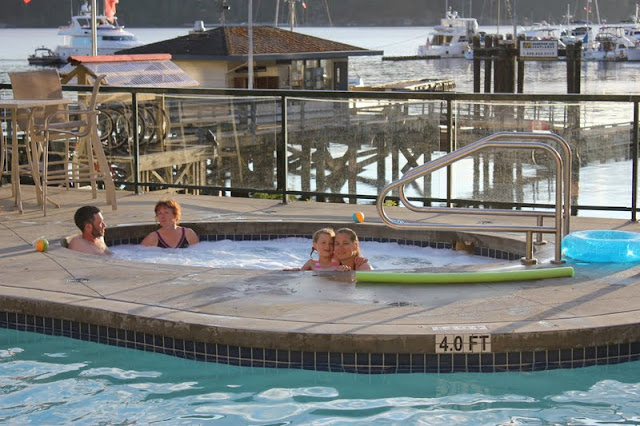 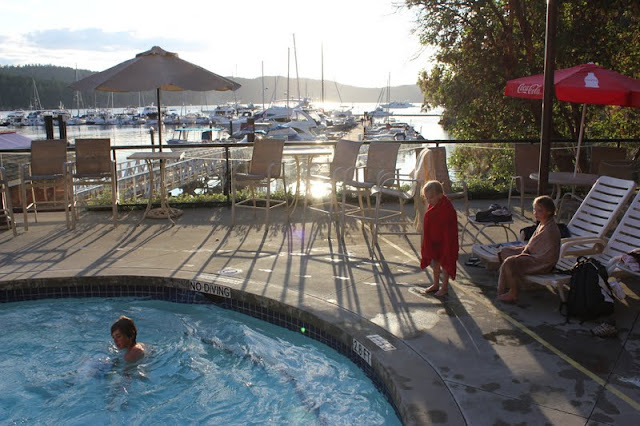 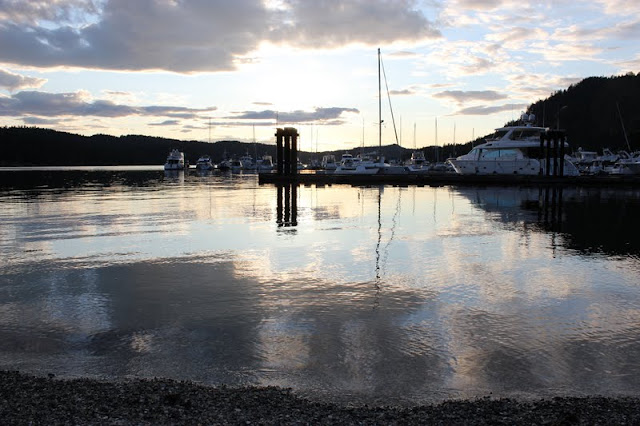 Here's a great shot I got of my two captains while we were at sea this afternoon. Back to reality tomorrow. 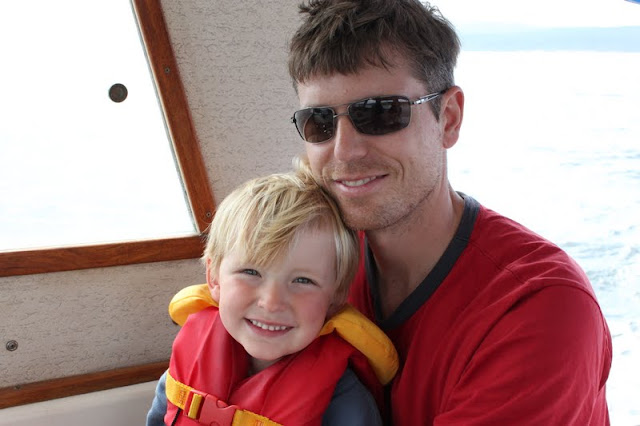