Trying to write about a 10 day trip to New York is like being a tourist just arriving in the city…..where the heck do you start?  I chose just to start walking, and kept it up the whole trip.

After my tour of Soho, little Italy and Chinatown on Thursday, I went on a walking tour at ground zero of New York, lower Manhattan on Friday.  Although everything was brand new to me, the places and names felt familiar to me…Bowling Green, Battery Park, Wall street, the NYSE, Broadway and the former world trade centre.   There were tons of people out walking and eating in outdoor cafes (I don't know why Vancouver doesn't close streets like this in the summers), huge security everywhere and surprisingly clean and orderly. 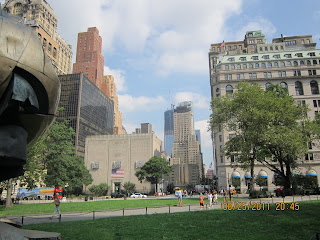 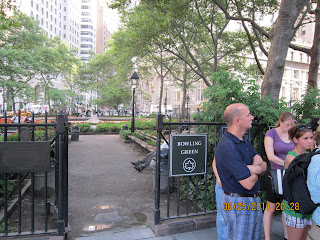 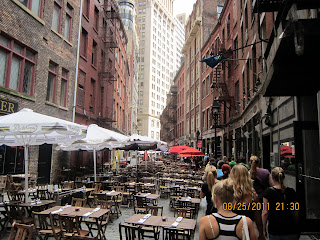 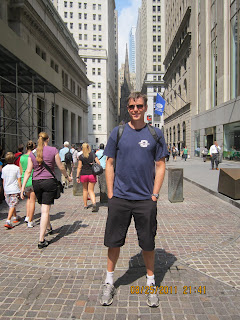 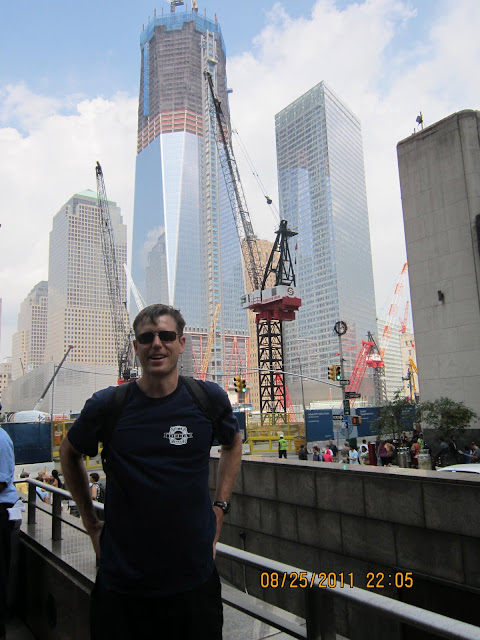 I then hurried off to the WPFG opening ceremonies in Prospect Park in Brooklyn.  The organization was fairly poor and thousands of us stood in the heat for a couple of hours with no clue about what was going on, so a bunch of us eventually decided to leave.  Apparently Dave Matthews eventually played a couple of songs, but I was happily back on a self guided walking tour up 7th avenue, Flatbush and Borough Hall in Brooklyn by then. 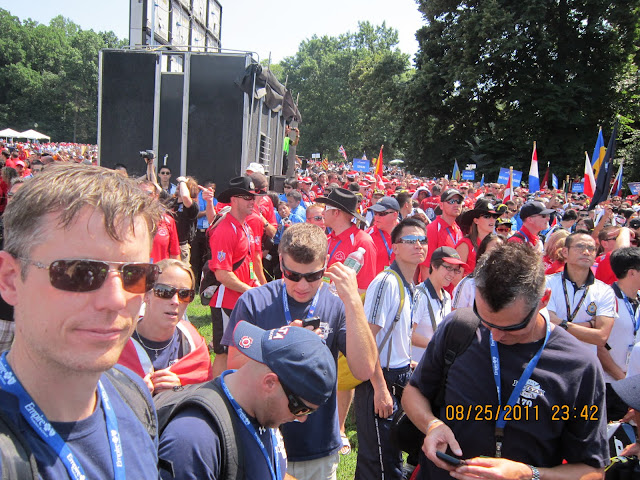 There were so many things to see and people to watch that I found myself at the Brooklyn bridge in no time at all…and figured I might as well keep walking into Manhattan.  By the time I got to midtown Manhattan my feet had had enough and I hopped on the subway back to our Harlem flat. 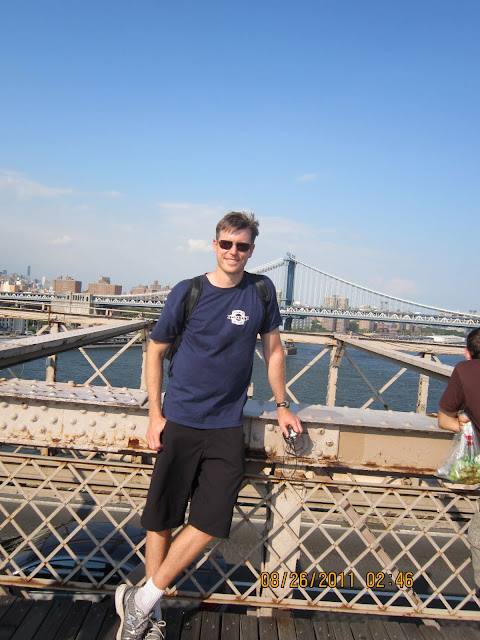 On Saturday, everything became about preparation for hurricane Irene.  Our games were postponed for at least two days and the city was practically shutting down.  When the MTA, New York's transit system shuts down, the city shuts down.  One of the guys on my basketball team has a friend who is part owner of a bar, Nelson Blue, that is the low lying ground under the Brooklyn bridge. 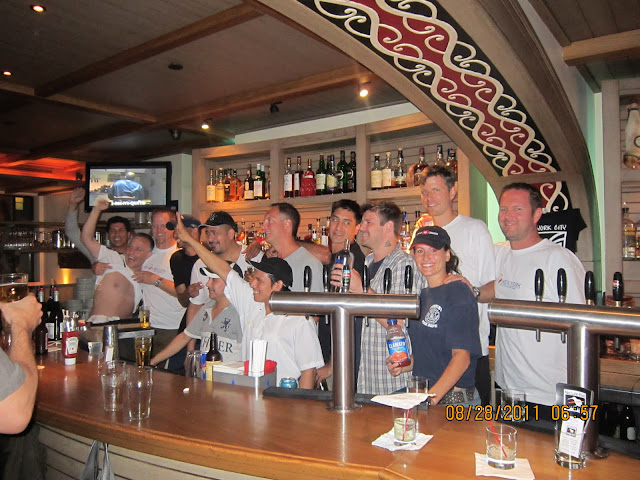 It's a cool place with a New Zealand theme that the locals seem to really support (it's like a living room for people living in 400 sqft studio apartments in the area) and Wall street people come to for lunch and dinner. 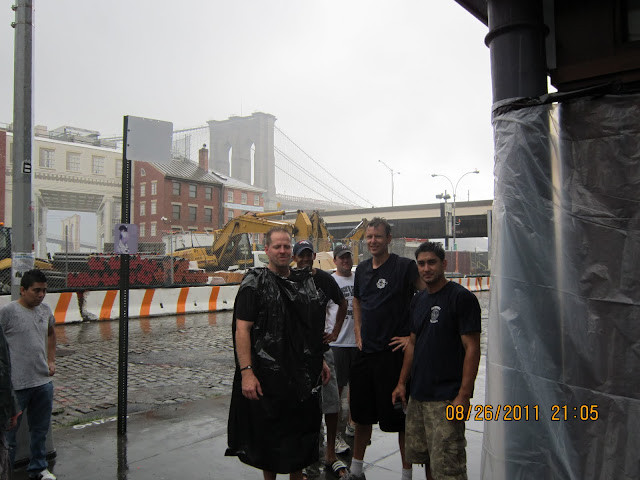 As great as the area is right in the heart of lower Manhattan, it is known to flood quite badly there even without hurricane force winds and rain.  However, we decided with our team of 8 firefighters plus bar staff we should be able to prevent any  damage to the bar. 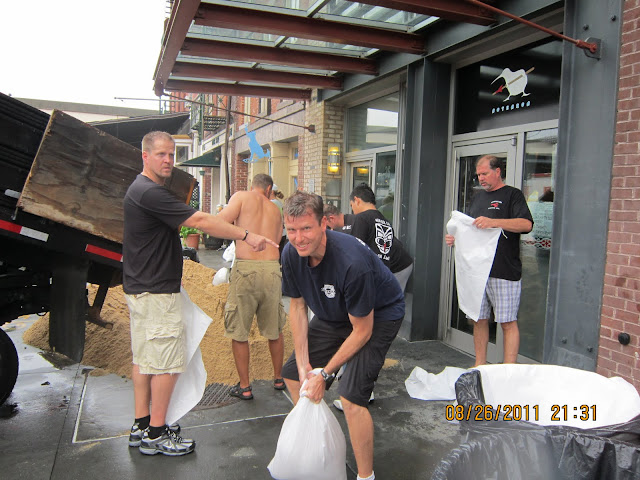 With the help of many sandbags, roles of plastic tarps and some staples, we managed to protect the bar from the flooding that other local places were hit with. 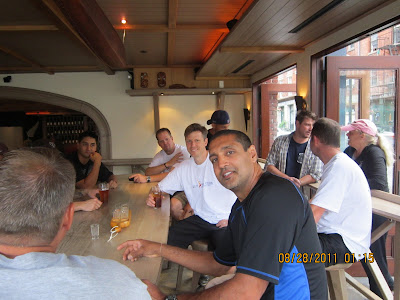 The grateful and generous people (Michelle, Rick and Frank) who run Nelson Blue provided us with countless drinks and plenty to eat all day Saturday and again on Sunday when we came to clean up after the storm.  It meant was a great way to ride out the time while New York was shut down (when the transit system stops, the city mostly grinds to a halt) but was pretty tough on the liver.

When the storm got too close to go out any more, we returned to our flat for a game of poker that lasted well into the night. 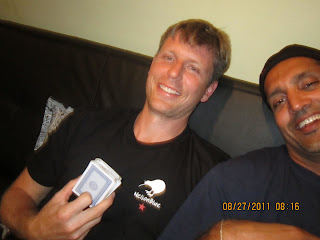 Posted by Ericandles at 4:26 PM