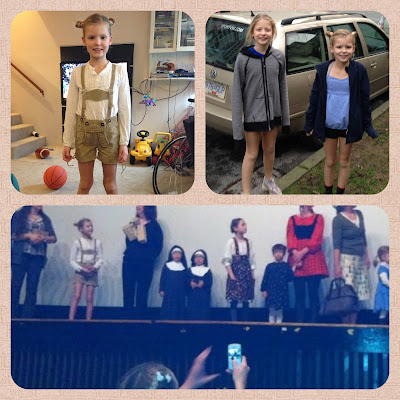 While I took Lukey to Sean Farquar's magic show in North Vancouver, Les decided to surprise the girls by taking the to one of the final shows at The Ridge Theatre. She didn't tell the what they were doing, so Finny was quite baffled as to why she left home in the middle of January in Austrian lederhosen.

I think she was quite relieved to find lots of other people at The Sound of Music sing-along also dressed up. Fin even got up on stage and won a prize.

Last week the girls also started volleyball lessons...and here they are on the way to their first practice.
Posted by Ericandles at 11:41 AM